Set the maximum roll angle for a curve

Hello, I’m using a Pixhawk 2.4.8 with firmware arduplane 3.8 in an RVJET, I’m having problems in the automatic mode, when I’m performing some mission the rvjet is making very closed curves, it’s giving a nearly 90 ° roll, there’s some way to make those curves smoother? or make a more open curve.

Look at the image below that I captured during the flight, after that curve my rvjet fell. 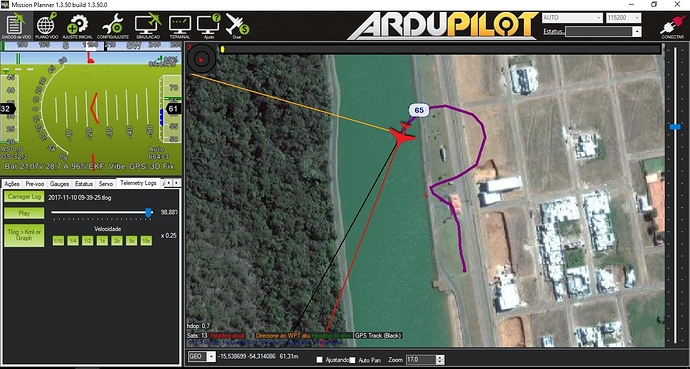 The standard documentation should help you with this: http://ardupilot.org/plane/index.html

with a default, working setup it would not roll that hard, most likely you had some serious configuration errors or something fell apart. Default LIM_ROLL_CD would not cause a demand for such roll.

I also thought it could not be just the roll value, but by analyzing the flight log, no error was displayed, only an error was shown in “EKF” -> “Velocity”, but I think this is just a displacement of GPS … In summary what happened was that I took the takeoff against the wind in the North direction and my first point was exactly in the back that is in the South direction, the RVJET began to make the curve normally, but at a certain moment it began to make the curve more closed (as shown in the image) … As I said, in the flight log did not show any error, only probable problem would be the value of Roll