A few years ago I purchased a mini quad copter for myself as a christmas gift. I learned to fly this mini quad copter and that inspired me enough to build a DIY quad copter. I decided to learn more about these micro electronic so this is what I created. For a more stable frame I used four aluminum arms from an old computer hard drive storage array. (dimensions - 13in x .5in x or 330.2mm x 12.7mm) For the mounting base I harvested an old 10/100 baseT network card and removed all the ic chips, resistors, and soldered parts that were on the board. I cut it in half and super glued the arms to the board. As shown in the image above.

After the maiden flight and while close to the ground the copter did an erratic flip after about 3-4 minutes of flight time. I was pretty confused as to what happened so I took the copter inside and started thinking weight and possibly the kk2 board settings. I ended up taking the battery holder off and attaching the lipo to the bottom with velco. I ran a few more tests and still only 3-4 min of flight time on a fully charged battery. Thinking about weight, I started to google the flip issue and read on the forums that some folks were isolating a failing ESC. Before replacing the motor I decided to test this setup again. Reproduced the erratic flip and immediately touched all of the ESC’s and motors. I felt motor #1 and it was well above the normal temp. So I decided to re-soldered the #1 motor and ESC’s connections and “BAM” I was now getting 6-7 minutes of flight time without any erratic flips. Now having a good battery, ESC’s, and motors I was able to then work on the kk2 board settings.

I made some mods to the design to try and make the quad lighter - removed the foam and the battery holder for starters. Took off the capacitors and used standard nylon stand off’s.

I added some cheap plastic landing gear that I picked up from Party City - nifty idea - these are just plastic table cloth clips. They provide some cushion and are cheap and easy to replace.

First I took off the kk2 board and the foam. Then plugged in the battery alarm onto the board. After this I soldered a female jst plug onto the bottom of the kk2. Then connected to a male jst that was then soldered to the power board. I then removed the RX module out of its shell and sealed it with clear shrink wrap and hot glued the end. All I needed to do now was to mount the rx to the kk2 board with double sided stick tape.

Step 4: Flight Video
please click here.
Please note that I am still learning how to fly and still need help turning around and flying back. Any feedback would greatly be appreciated!

I hope this build helps some of you folks that love to tinker as much as I do!! 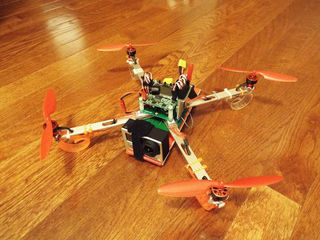 I decided to push this little quad and try my luck mounting a GoPro to it. My goal was to get some flight video. This is what I can up with - cheap piece of dollar tree foam, wire ties, and some velcro. I did not know what to expect, but the video came out pretty good; no jello or crazy vibration.

Nice Post, thank you for sharing!
Now put an APM or better Pixhawk2 on your machine