I’m trying to monitor several UAVs under QGC. They are equipped of 3DR radios 500mW 433MHz.

When I power up a single UAV, all works good: I have 0 Rx Error reported by QGC and I can perform a flight.
As soon as I power up a second UAV, I get Rx Errors. I also get some “Communication Lost” lasting few seconds.

I read and understood most of infos from http://ardupilot.org/copter/docs/common-sik-telemetry-radio.html and can’t find any topics about my problem.

I tried many different radios configurations but still get the same problem:

Thanks for any information

I think I found the answer to my problem: the radios are very noisy and emit to much parasites in the air.
I noticed today that my GPS are much more accurate and get no glitches when the radio is OFF.
So each radio is interfering to the other radios with different NetID/frequencies.

It is 3DR radios, I thought it was a good quality product… I will contact my reseller.

Your not the first poster to have problems with noise from those radios.
It is apparently due to very bad/cheap antennas

So the radios might be OK so try changing out your antennas for better ones.

My understanding is that 3dr newer made a 500mw version of the Sik radio.
500mw ones are knockoffs with a PA added, however correct operation of a PA with Si4434 requires some changes in the radio parameters in the firmware which did not happened. So no surprise they noisy as hell.

Thanks for your answers, I will try another antenna type as soon as possible.
And also will try to understand how to make the firmware compliant to the Si4434 chip.

At the moment I have to use wifi/4G as a backup solution.

I don’t think that without a significant RF stage redesign those radios will ever work. A good antenna helps a little but it won’t be significantly better.
The fw changes are depends on the actual implementation of the PA circuity so it is hard to tell.

I have also been trying simultaneous drone flights with 3DR radio pairs. Results are good but not perfect.

Some conclusions:
·The 3DR radios affect the GPS, so I try to separate them.
·With different NET IDs but overlapping MIN_FREQ/MAX_FREQ, I couldn’t even connect the drones to MP on ground.
·Get good gain antennas, place them parallel (vertical) and separate them as much as possible on the ground station (I place them on the roof of a car). 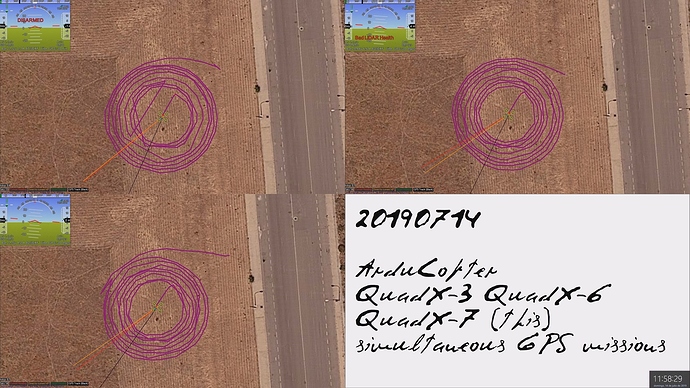 
When the purple trace is a straight line there is data loss, which can be heard also several times at the video part (it recovers). Results are good but not perfect.

I’ll try next separating MIN_FREQ/MAX_FREQ (now default 1740) for each pair, and separating assigned ranges from one pair to the other. You are using 250, which could be low. I can’t find rules for choosing these numbers, but there seems to be big ranges to use.

Tobias,
Andras is correct. I found making a antenna swap worked well on bench test. In flight the cheap (marked: FPV Radio Telemetry) first lose RTK then mav. I wasted a bunch of time on them.
100mw radios seem to work fine for a cheap fix. RDF900 radios are recommended often too.