I went out to test the autonomous flight capability of my copter today. My goal was to perform a waypoint mission. I performed a short flight using just poshold to test the gps and was successful. I then set the RTL_ALT parameter to 7500 as i didn’t want it to fly up too high. I performed two successful tests with the RTL flight mode, I basically flew a bit far away and went into RTL flight mode. It returned to home on both attempts at roughly the altitude I set it to. I then proceeded to the mission test. I had a very basic mission with just two waypoints. I took off and went into auto and the drone traversed the mission properly. But I had forgot to add the RETURN_TO_LAUNCH command at the end and had to land it manually. I then added the command and did another attempt. The second attempt went fine until the RETURN_TO_LAUNCH command. When it was time to return to home the copter kept rising and rising. At first i thought the return to home command had a different altitude parameter from the flight mode and thought that it was going to stop at 15 m. It went way up high (blackbox log says 50m) and I turned it back into poshold to land. I was hasty as i had low visibility and decended a bit fast. About 5-10 meters from the ground the copter started wobbling mildly (from the propwash perhaps?). It then had a piece fly off from it (after a review of the flight footage i realised it was the top left propeller’s wing) and then crashed. I don’t know why it decided to rise up so high or why the propeller wing snapped off (the props were brand new, maybe the chassis flexed enough for the proppeler to hit the chassis? My chassis is 3d printed PLA but it was rigid enough to not flex or break from a small wobble, it survived much worse) Anyways thanks for your attention, I would be extremely grateful if you could answer why the copter flew so high or why the propeller suddenly broke off.
Here are all the flight log files and flight footage. The crash happens at 1.18 on the video titled Mission crash: https://drive.google.com/drive/folders/12rHBE3fgy8AFaL3T8zZAjTTrvj0iHQ-S?usp=sharing

Just an idea: could the constant rising be due to my waypoints being at 10m and rth altitude lower than that (7.5). Maybe there is a logic that increases the desired altitude until it hits RTL_ALT, and when you send the rtl command when higher than your RTL_ALT it just never hits the value and keeps rising? I mean it increases its altitude for RTL but is it programmed to decrease it as well. Anyways It doesn’t seem like a bug that the developers would miss but maybe it is the case?

It just did what you told it to do.

I was going to check the flight log too, but it’s only the “backbox” data - you should investigate relying on the standard Ardupilot logging - it’s much more extensive and doesn’t require any additional hardware or wiring. Commonly called Dataflash logs and use a .bin file extension.
https://ardupilot.org/copter/docs/common-logs.html

Oh my god I feel so stupid! Thank you. But I still can’t understand how it performed 2 RTL’s successfully with the botched values. If you download the zip file inside the flight logs folder in the drive ling and look inside the folder called 19.03 you can see all of the log files that were created. I analysed the DALT and ALT values and at the start of the mission and could see that it went into RTL mode and raised upto a resonable height (7 m) then stopped. This corresponds to the second time I tested the RTL flight mode. The logs for the first one are under the folder named 18.51. I mean when i look at the log file in excel I can see my RTL_ALT parameter is set to 7500, and aren’t the parameters saved from the start of the flight? But I’ll remember not to tell it -to pay a visit to the ISS next time thank you!

All of the flight log files are there, you can see them if you go into the drive link, go into the folder called blackbox data, download the zip, open the zip. Inside the zip there are two folders called 19.03 and 18.51 and some other unimportant files. Inside the 18.51 folder you will find the flight logs for the initial poshold test and my first RTL flight mode test (done in one flight so there is only one set of log files). Inside the folder named 19.03 you will find the flight logs for the second RTL flight mode test i did, the mission where i landed manually and the mission with the RETURN_TO_LAUNCH that crashed (all done in one flight so there is only oneset of log files). All the neccecary files are there such as the .bin .log and .kmz files. And a question: Does the .bin and .log files have any difference? They seem to tell the same story if you open them in mission planner and the .log file even can be viewed in excel.

So from what i can gather from this file one parameter that may be limiting my altitude increase during the first two RTL missions is RTL_CONE_SLOPE. The rtl flight mode tests altitude were capped at about 6-7 meters and with a cone slope of 3 I would have to be 2 meters away from home which doesn’t seem too far fetched. the last mission raised to an altitude of 50 meters before being interrupted and with a slope of 3 I hould have to be at least 16 meters away which again seems ok. Does the .kmz logs allow me to determine my distance from home maybe?

That, together with the 7500 cm, would explain everything i think.

Alright, that seems like all the mysteries are resolved. Thanks a lot everyone. I still don’t know how the propeller snapped but I probably will start a new thread for that.

If you over-tightened the screw nut it can crack the propeller hub.

The hub is fine, the wing looks like it just snapped in half. Maybe a sudden acceleration or something caused it to experience too much upwards force? 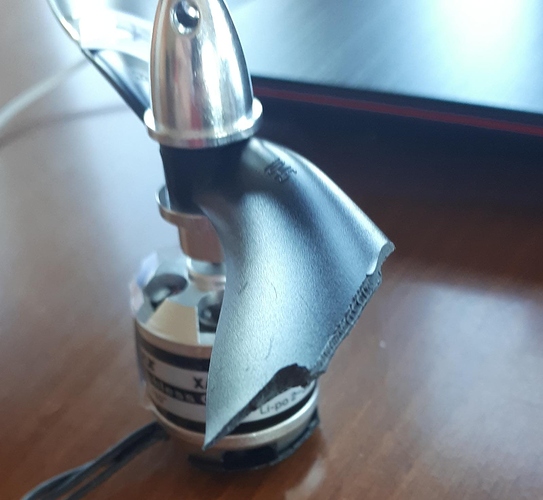 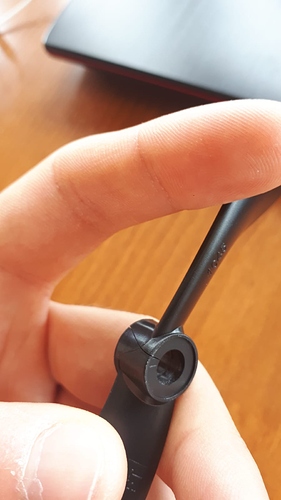 It looks like a common Chinese plastic crap. No surprise it broke.

Small crack? The hub is cracked through.Those blades would flop around like a live mackerel.

Alright thank you guys, I honestly didn’t know that off brand propellers could explode so easily. I’ll definitely invest in some better quality ones next time. I’m relieved to learn that the failure wasn’t due to my chassis design. Thanks to everyone for their kind and helpful support!