Rover-4.2.3-rc1/rc2 has been released for beta testing and should appear within the ground stations (MP, QGC) within the next few hours. The changes vs 4.2.2 are in the release-notes and copied below.

Any and all testing and feedback is greatly appreciated!

P.S. -rc2 was released shortly after -rc1 because we missed including the final fix for the BlueRobotics Navigator autopilot

Thanks. I did a fast test of Rover v4.2.3-rc1 on a balance bot with same mission as in v4.2.2 without using GPS (with wheel encoders) as in:

without needing any parameter change from v4.2.2, and all seemed to work smoothly.

It seems that this bug has not yet been corrected in this version and this is good: I have tried several v4.3 development versions with the correction, and it required absurd values on ATC_BAL_D and resulted in noisy vibrating motors.

BTW, although I don’t know the code, I tried to incorporate the correction to v4.2.2 stable version, essentially:

The result was the same as with v4.3dev, requiring an absurd value on ATC_BAL_D, and producing noisy vibrating motors. So it seems that the bug is corrected in v4.2.x in some other piece of code.

Great, thanks very much for testing. Yes, you’re right that I haven’t included the wheel encoder fix because I was worried that it would lead to tuning parameter changes (which apparently it does). I have an item on my to-do list to investigate this a bit more so let’s test/fix more as part of the upcoming 4.3.0-rc1 beta testing (which will start around the end of August). 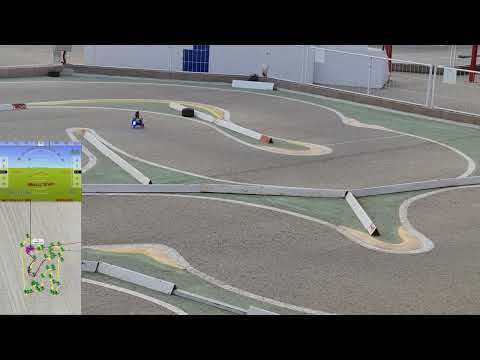 Although the mission ends with a DO_JUMP waypoint to repeat indefinetely, and it just starts the second lap, guidance with wheel encoders is sufficiently precise for one lap.

(The GPS was taken out, so there is only one compass (Pixhawk1 internal)).

It is difficult to understand this with the x1000 μs/ms error wheel encoders bug, and the worse performance with v4.3dev, which corrects it. Won’t the bug be compensated elsewhere in the code in v4.2.x?

Txs for the feedback. It’s quite impressive that it can get all the way around the track with no GPS!

I looked at it briefly. I’m not sure what the bugfix was trying to fix. I have it down to, there is a configuration file that is labeled as time in milliseconds, but on 32-bit systems it is actually in microseconds and/or wheels are going faster then the max limit of 115rpm.

Won’t the bug be compensated elsewhere in the code in v4.2.x?

yes, and it doesn’t work, but I am not sure what the ‘bugfix’ was actually trying to fix. To me, it looks like numerous things need to change to get it to work right.