In steering mode, the transmitter’s heading stick controls lateral acceleration… which means you’re controlling the G force you feel as you go around corners. This should mean it turns faster at low speeds but slower at high speeds. The throttle stick controls the vehicle’s ground speed. So for a given throttle stick position, it’ll always drive at the same speed even if the vehicle is driving up or down hills.

In manual mode, the transmitters heading and throttle sticks go directly out to the motors (after passing through the mixer in the case of skid-steer vehicles). This mode doesn’t require GPS. The steering response, especially at high speeds will be much larger in manual mode compared with steering mode. The throttle goes straight out to the motors so you’d expect the vehicle to slow down while going up hills, speed up while going down hills.

hope that helps. Thanks for testing.

Because testing seems to be going fairly well (knock-on-wood), I’m thinking of pushing Rover-3.2.0 out as the official live version within the next 3 days or so. If people have any objections please speak soon!

The final version will be just like -rc4 but also include these small changes:

I also hope that Michael Oborne can make this small change to the mission planner soon: https://github.com/ArduPilot/MissionPlanner/issues/1719

Of course we will continue to improve rover in future releases adding better object avoidance, etc.

New release… great… but has anyone else been able to use the POZYX system. I get “EKF IMU0 has stopped aiding” while in manual mode. When I switch to auto, I get “Bad GPS Position” followed by “Flight mode change failed”.

I’ve had a look at the logs and I wonder if maybe there is a problem with the update rate and/or beacon data being sent to the autopilot.

In particular the BCN.D1 value (the 2nd beacon) seems to always be 3.389. Also the distances to the beacons don’t seem to be changing very often. It could be that the distances really aren’t changing but I suspect that it’s actually that the updates are very slow to arrive. I think the distance to each beacon needs to arrive at at least 4hz. In my setup I was managing around 7hz.

EDIT: Paul Riseborough will also have a peek at your logs…

Please use EKF3 for experimentation with range beacons. EKF2 did not get this fix: https://github.com/ArduPilot/ardupilot/pull/6476.

Data rate is 10Hz which is OK. 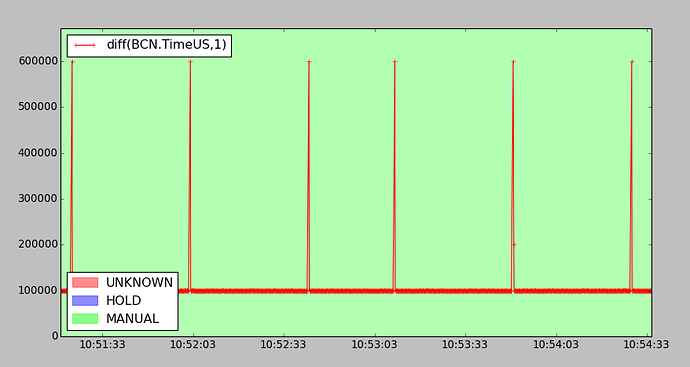 Thank you for your answer. This is now very clear.

I have a question that is a little off subject. I am looking to understand rover software code. I can write simple arduino and c++ programs however my programming skills are not great however I want to attempt the following.

Do you know of any tutorials that really explain in detail the ardurover code. I need an overview of how the main elements of the code work.

Also I am looking to find a cut down version of ardurover I want to find the code for a gps waypoint driving rover. I do not need endless possibilities as I only want the rover to drive between waypoints with a gps and compass and to be able to pivot turn and do 180 degree turns at each WP. I ie I want to the rover to navigate a simple grid.
The code can be reasonable simple as I do not need to use the code on may chassis or many different motor controllers etc etc. I will then develop it as a learning exercise. I would like to do this as I think understanding ardupilot would be a major task and will take a long time before I got anything that I can use for my own projects

Of course I will continue with ardurover on my other projects

Thank you! I must confess I’ve modified the Arduino sketch just a bit.

As I mentioned sometime ago, I really don’t understand all that is sent by the Arduino to the Pixhawk, so it would not surprise me if my fiddling is to blame. For example, it is my belief that the doremoteranging is just between anchors. If this is wrong, please let me know.

Thanks for all your help

The best we have is in the developer wiki’s “Learning the ArduPilot Codebase” section. In particular there is a “Rover: Adding a New Drive Mode” page.

I’m afraid I don’t know of any cut down versions of ardupilot/ardurover. We try to layer and compartmentalise things so the complexity is kept under control but the system as a whole is not simple of course.

Rover can already do the things you’re talking about (driving a grid, pivot turn, etc) so no programming is really required I think… but it’s all open source so do whatever you think is best of course!

Details for enabling the EKF3 are on the EKF wiki page.

Based on Paul’s comments I’ve adjusted the note at the top of the Pozyx page. Thanks Paul!

when I checked the output of my system I could not see the required pwm signal.

is this a fuctionality specific to the pixhawk …would it work on the navio2?

Also the turn max g parameter has a minimum of 0.2 can I use values less than that ? I don’t see that in the changes this commit .

changed 1 files with 5 additions and 5 deletions.

I think I may need to

Hi All, I did a short test yesterday where I tried to tune the NAV params. I tried to do a simple waypoint following Path. (Square with 4 waypoints). Again throughout the whole test I had good RTK fix solution. I wasn’t getting a nice solution. A quick inspection of the logs show that the desired acceleration is way higher than what my rover can do. See below [image] logs: https://cloudstor.aarnet.edu.au/plus/s/ME8D2CfgLJ07of4 - password ardurover123 I tried playing with the NAV1 params …

I think I’ve found a problem which stops Rover from going into autonomous modes unless there is a GPS. I’m currently testing with the ZED camera and it’s not letting me go into Steering mode. My vehicle is appearing on the map and I’m not getting the “IMU0 has stopped aiding message” so I think there are likely two problems in your vehicle - but one of them I have reproduced and will look into (issue raised here)

Should it be possible to go into ACRO without GPS? Was having consistent “Bad AHRS” with no GPS connected and it was rejecting the mode change to ACRO - was that because of the AHRS or lack of GPS?

Did the new version get released? When I try to upgrade with:

Also, are there instructions somewhere on how to install beta versions? apt-cache only shows the one version on the repository.

To be clear here - at the moment we require position for Acro mode.

In the future I would like to require just speed.

It’s been released. The ardupilot team doesn’t actual control the “ardupilot-copter-blue” package, we have an autobuilder that builds the firmware and then ground stations generally fetch it from there. Linux releases are a bit different though because more is required than just the binary so I suspect Emlid has created that package so they will need to update it I think.