Rover-3.2.0-rc1 is available for beta testing

Rover-3.2.1-rc1 will soon be available for beta testing. It is going through the build server as I write this so within a few hours it should appear in the Mission Planner’s Install Screen’s “beta firmwares” link.

Changes are listed in the Release Notes and are also copied below:

We still have a fair bit of work ahead of us to update the wiki to explain all the changes but here are a few tips:

Sorry, need fence and proximity support on top of that

Yes, that’s definitely in the plans! We just need to make sure all the lower end functionality is working well first. In particular the throttle and steering control rewrite was a pre-requisite (in my mind anyway).

What does this exactly mean from a software perspective?

Does it mean …the APM can send full PWM signals to a motor controller as opposed to RC PWM signals?

So I think Rover can send “regular PWM pulses” instead of the RC PWM signals. It’s basically the same feature as we use to drive the skyrocket drone motors which are brushless. My rover doesn’t make use of this but I’m pretty sure Nick used this for his rover (see MakerFaire blog posts).

By the way, there’s two different types of brushess motor support. One is “Brushed With Relay” and the other is “Brushed BiPolar”. Now, I’m a bit new at this so not sure if those names are good or not but the “Brushed With Relay” type of motor seems to have a relay input and if we send a high voltage it spins in one direction, low voltage and it spins in another. The “Brushed BiPolar” seems to control the motor direction with different PWM values only (i.e. no relay pin in)

I know that Pierre @khancyr would like to expand the motor controler class to encompass higher end type of motor controlers. That is an interesting avenue but it might be getting quite complicated to support.
Take the roboteq controler for example, it has its own pid loop controler for the encoder, would you use this one that is optimal for the drive or use the ArduRover that is less optimal but better integrated with the EKF?
In this case I could be fine to have the option of not using the ArduPilot pid but still expose the encoder signal to the EKF. I am pretty certain this can be added as a parameter, but we need a bigger roadmap for these future options/addons

I also have a bug to report.

Currently, I’m using ardurover 3.2-rc1 — will get around to upgrading to rc2 soon.

I noticed that when using mission planner, when I goto
Initial setup -> mandatory hardware -> radio calibration
to check out my RC input signals.

I noticed that if I check the reverse checkbox on throttle, my throttle stick becomes a roll input and starts turning my rover either left or right. My roll input also becomes the throttle. This is ofcourse incorrect as I would expect that when reverse is checked on the throttle, forward becomes backwards or backwards becomes forward.

The opposite is also true. When I check the roll reverse checkbox. my throttle become the roll input and my roll input becomes throttle. very weird

Here is my setup 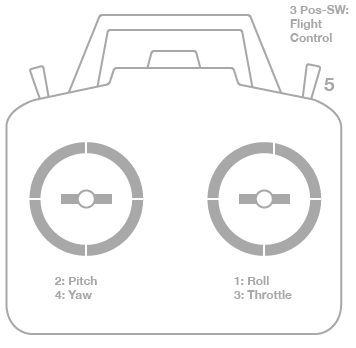 We should report this in the mission planner’s issue list including the steps to reproduce. https://github.com/ArduPilot/MissionPlanner/issues. I can do this or someone else can do it but in any case, for now, don’t hit that checkbox and instead set the RCx_REVERSED parameter directly in the full parameter list… or better yet, just use the reversed setting in the transmitter (if it has one).

Will this have an effect in steering or auto mode …

currently I have RC2_reversed (steering input channel) . My transmitter has all the input controls in its nominal (non inverted state)

I am able to spot turn in steering and auto mode (thanks to the latest changes to the code) and it does spin in the correct direction.

however in STEERING MODE when I give a left or right steering command while giving a bit of thottle the rover hardly reacts to the comands. It stutters alot when moving straight. I can see that it does slowly veer left or right but it is very very slow and not smooth like in manual mode.

This is perhaps your first time using steering mode? Steering mode drives a lot like AUTO mode because it uses the same “L1” controller (which is a target position -> lateral acceleration controller).

… however @khancyr has made a change so that pivot-turns will work in Steering mode from the next version so you’ll find you’ll be able to turn it on-the-spot like in other modes in the next beta release (coming soon). Still, it will not drive like a manual mode…

Yes …it is my first time using steering mode .

I do notice that my steering would veer to the left or right and I cannot explain why.

The rover drives reasonably straight when in manual.

I’m assuming it is the auto code parameters …but I have no clue where to begin.