Ok, my first adventure in to Rover is starting and its going to use a Traxxis Stampede. I just happened to be at the park with the kids and a conversation about my flying toy drone ended uo with me buying a lightly used Stampede and all the bits. Now where the best place for the autopilot, off to read docs I go. 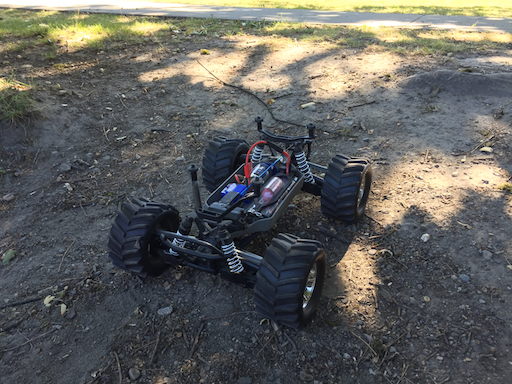 Hi Bill,
I have built several Traxxas brushless 4WD Slash (similar to the Stampede) Rovers.
Attached are some pictures of those Rover builds.
I built a platform that sits above the chassis to mount the Pixhawk and telemetry transceiver. This is a dual GPS Rover and as you can see the GPSs are mounted as far from the center mounted brushless motor as possible. I also reinforced the spring towers with aluminum angle pieces to help stabilize the Rover incase of a rollover which does occur occasionally.
Regards,
Tom C AVD 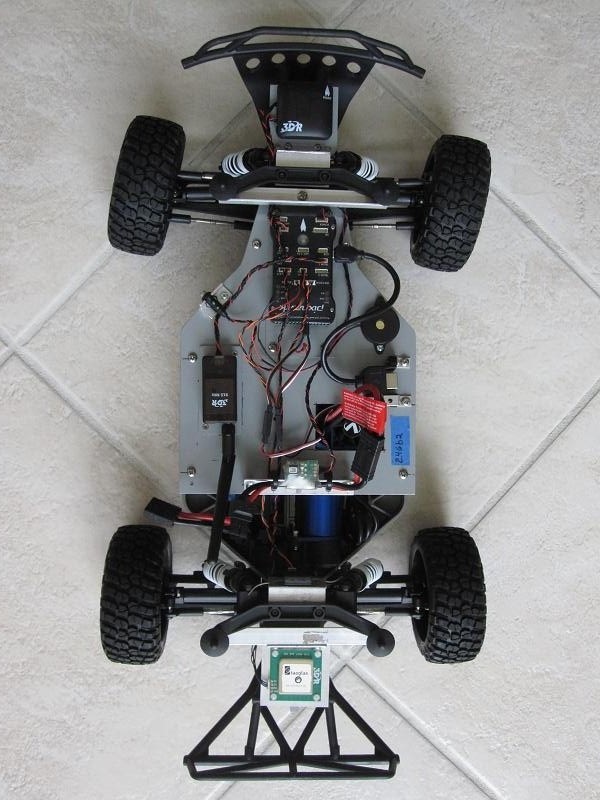 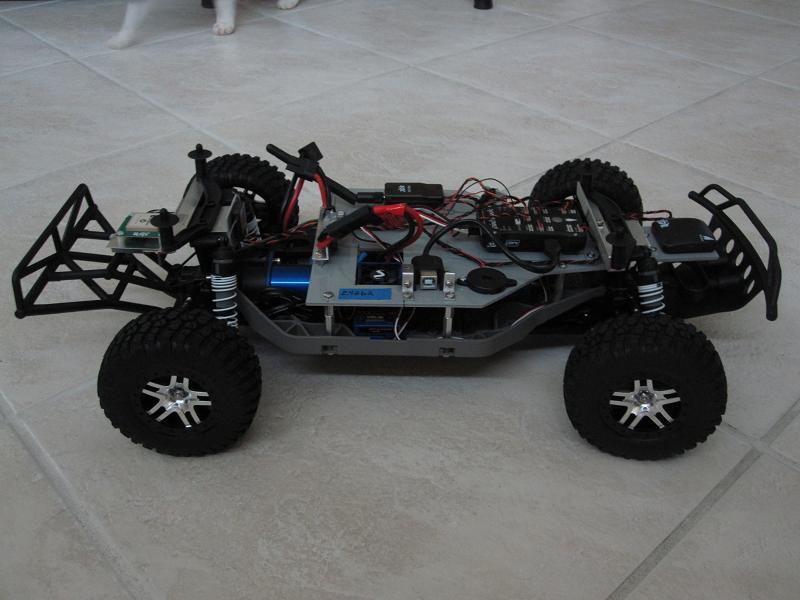 I have the platform installed and the electronics placed. This is very fast setup as I’m off on holiday, so wanted to take it with me to fiddle with…plenty of room to get the RPi on in the future and add some FPV 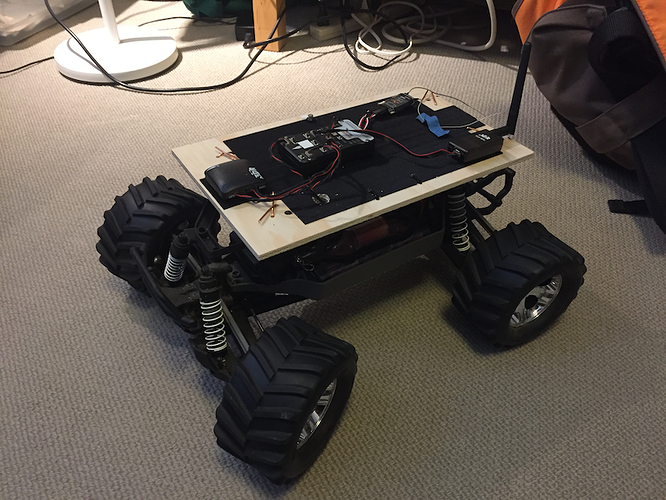 It’s alive, and ready for action… and it starts

Tip for first time builders. Ignore the Rover sticker with your pixhawk… The Steer channel in the Aileron marked channel for planner (aka CH1 ) 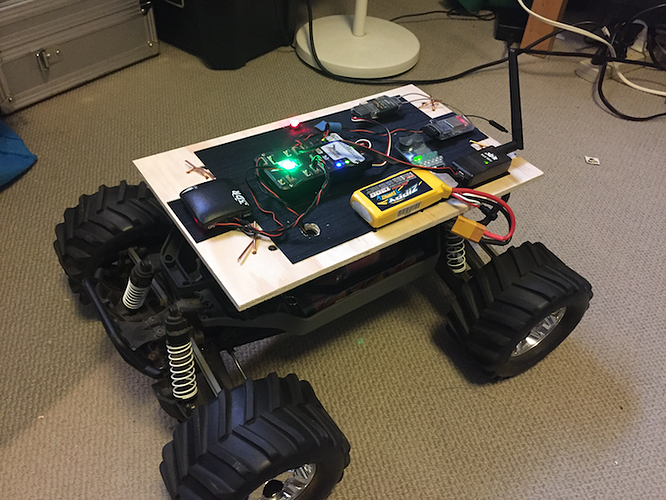 Hi Bill,
Nice build.
However you will notice that the navigation platform on my Traxxas Slash Rover sits below the shock towers/body supports. The reason for this is to protect the Pixhawk from being crushed during a rollover. And my Rovers have suffered their share of rollovers during performance tuning without damaging the Pixhawk.
There might come a day when your Rover gets away from you and winds up flipping over if it runs into an obstacle. Having the navigation platform below the shock towers will definitely protect the Pixhawk incase that unexpected event occurs.
Regards,
TCIII AVD

I like what you have done with your build. Looks good. This first build was to get it working and ready to take with me on holiday. With the weather we get in BC it going to need a waterproof rebuild soon

This platform gives me space to add a Raspberry Pi and Vision system.

WaterProofed Rover. I shall rename name in BoxRover… Next mod will be to remount the box, so I can potentially get the shell back on… either way objective is to lower the CoG. 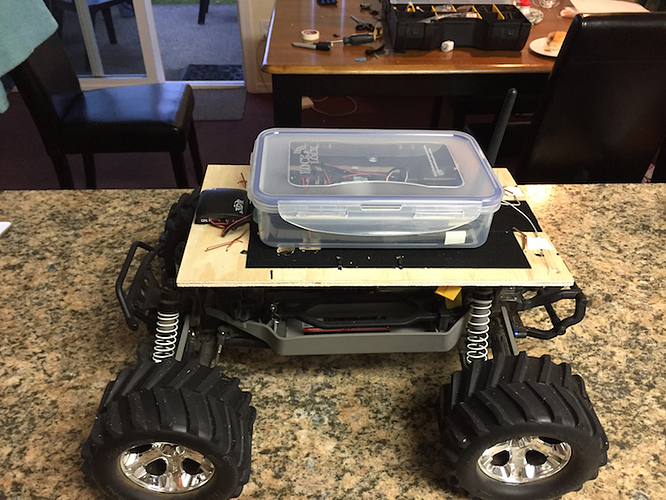 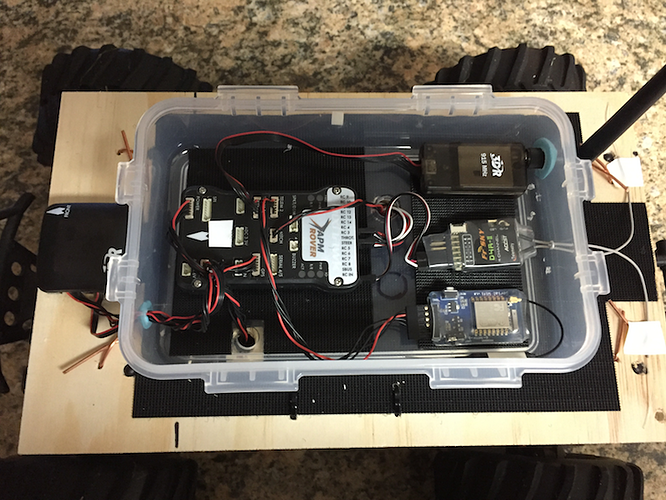 Hi Bill,
The Pixhawk and associated support components going to get kind of warm in that box unless you install some kind of ventilation.
Regards,
Tom C AVD

I think it will be ok here. It’s not Florida

The power electronics are external to box so it all low power stuff inside. I’ll keep an eye on the temp from the baro sensor and see how it goes.

@TCIII I did some runs yesterday (ArduRover 3.1 RC1 (Beta)). I’m still trying to diagnose a reset issue I keep having. Not sure what it is yet.

As for temperature it seemed to remain about 50-53C as measured by the baro. Little warmer than expected, but I think it’s workable. It was definitely running hotter on constant repeat runs, but not in a runaway situation.

@billb,
I had similar reset issues when I began using the Pixhawk on my Traxxas brushless 4WD Rover. I believe that there was two issues that caused the Pixhawk to reset.
The first issue was the fact that the Traxxas ESC was providing 6 vdc and not 5 vdc to the Pixhawk servo output power bus. Bypassing the servo output power bus solved that problem.
At the 2014 Sparkfun AVC I experienced a starting line reset do to the fact that I was using a NMHi battery that previously had one run on it and was causing the Power Module to brown out and reset the Pixhawk when I hit the start button. Apparently the NMHi battery could not supply enough current to both the PM and the brushless motor at start up.
Tridge did add a motor ramp up parameter to the ArduRover code to prevent a brown out at motor startup though switching to a 30C LiPo battery solved that problem.
Regards,
TCIII AVD

Thank for the info. I had done the first part and removed the power from the ESC to the servo rail.

I was suspecting that it was the LiPo I was using since they are only 25C 2S 1300mAh. And they are 4yrs old. I’ll look into the ramp up power for the NiMh battery I have as well

I did some testing today, and found the THR_MAX param which i set to 100… now it moves at 6m/s… before I couldn’t understand what was going wrong

(Sorry for the shaky cam, wasn’t expecting the speed)

Here’s some log analysis. 40s run… might need to try faster, but also need to lower the CoG

I tried this, and still no joy. Still reseting on acceleration. The fix was a separate BEC and battery on the servo rail to power the pixhawk. I disconnected the PM 5V in to keep Battery monitor working. Now it accelerates like a champ at full 100% throttle

Hi Bill, would it be possible to list all the components needed to covert a RC Car into an a GPS Rover?

Just go to the wiki and all is there.