Hi everyone. The ArduPilot team is proud to announce the Rover 3.1.0 BETA. This BETA release is for users who want to try out the latest and greatest new features.

In this release the most significant new feature is REVERSE. Its now possible in a mission to tell the rover to drive in Reverse. If you install the Mission Planner BETA (the other GCS’s probably have the change now too), insert a new Waypoint using “Add Below” button ton the Flight Plan screen and select from the Command drop down list you will see a new command “DO_SET_REVERSE”. It takes 1 parameter - 0 for forward, 1 for reverse. Its that simple. Please give it a try and report back any success or issues found or any questions as well.

The ArduPilot team would like to thank the Institute for Intelligent Systems Research at Deakin University (http://www.deakin.edu.au/research/iisri) for the sponsoring of the reverse functionality.

There are a number of other new features in this release and information will be updated soon but we are keen to get users to test the reverse functionality in this Beta release and provide feedback.

Personally, I think it’s a bit backwards… (i’ll get my coat!)

Hi all. I have pushed out BETA3. We were having an issue with parameter corruption due to a build problem. If your using and of the BETA releases please upgrade to the latest BETA.

I’m pleased to tell you that I’ve tried this BETA Firmware in my Boat.
On the good side, t seems it had solved the problem of skipping the waypoint delay when passing outside but near the waypoint circle. On the other hand, I’m still having troubles with the continuity of a Mission, sometimes it stucks on a waypoint after the delay time has ended.

Sorry, here is the TLOG of the Mission I’ve donde yesterday. On the 3rd Waypoint it get stuck.

Esteban I have replicated the issue - thanks! I should have a fix sorted out soon.

@gmorph I’m starting some R&D on my next rover (boat) project and this requires many more features than my first one. A few questions on the latest firmware:

What did you want the LAND mode to do exactly?
If your looking to use IRLock to guide the vehicle that’s an extension to LAND in the Copter world.
The SF40c isn’t supported yet but there is talk of it. I don’t have one and can’t afford one at this stage but I think someone might be creating a simulator of one if not already so it might be incorporated soon.

I’m looking to mount IRLock on a USV and have it autonomously LAND or Dock with a buoy with 4 MarkOne beacons on it. I’m still working on the mechanical part to lock the vehicle to the buoy and then release it when commanded. I’m not sure if it is feasible right now, just something I’m starting to look into. There aren’t many examples of techniques for autonomous docking but the IRLock is interesting. 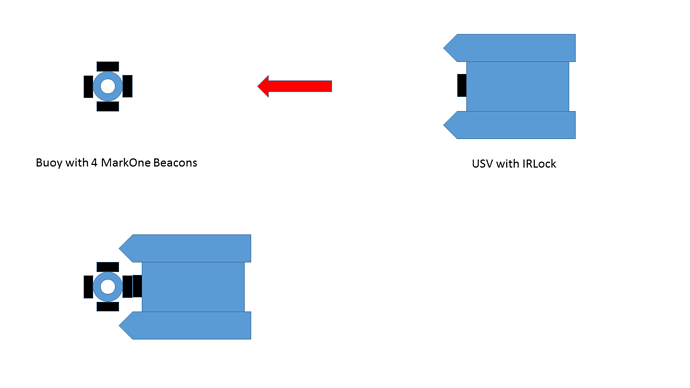 It sounds very cool. Please keep us updated with progress.

@Kevin_K
Be careful when using multiple IR beacons.
From my own tests with Copter, the code doesn’t handle it well as it is made to track only one source (even though you can track mulitple one with Pixy). Switching from one target to another, makes the EKF reject the “new” position of the beacon since the variance is too high, thus resetting the whole thing and doing some aggressive control commands. You will have to modify the AC_Precland quite heavily to make it works smoothly but it would be very interesting to have a tracking mode in Rover.

@gmorph
As Kevin mentionned, using the AP_avoidance librairies in Guided Rover mode would be awesome (360 Lidar / Radar). Much like AC_avoidance, we could create "2D tunnel fence " for the Rover to move safely in a complex environnement (forest ?). I know Randy is working with Stereo camera at the moment but I didn’t go deep into this yet…

@Kiwa21 Thanks for the feedback, looks like a lot of experimentation will be necessary. I think for now if I need to hook into a buoy I’ll just be manually piloting it in with a camera and a joystick.