Roll and pitch oscillations then crash

Hi all,
Yesterday I went to the field to do my 1st flight and autotune the PID gains of a custom frame quadcopter.
The configuration is ‘X’ and I use Pixhawk with APM Copter V3.3.3. 30A ESCs with D3530/14 motors, 7x4’’ 3 bladed props and a 4S 5000mA LiPo battery. I attach a photo of the copter. I did all the needed calibrations and checks through the Mission Planner 1.3.39. The GPS signal was strong outside and after a preflight test I took off the copter in stabilize mode around 1 meter from the ground and I moved it around some meters with my Taranis telemetry system. The flight for some secdonds was smooth enough but suddently the copter started to oscillate around the roll axis without being able to stabilize until it hit the ground. This happened before turn to Alt hold mode and switch the pre-configured channel 7 for the autotuning of the PIDs. I went through the log file and in ATT signals I see the desired roll and pitch to be almost zero but the response from the pixhawk is violent oscillations. I can not see any hardware error prior or during the oscilations. I believe that the PID default values probably made the response unstable. I do not have much experience to extract any other valuable information from the log file. I attach it for reference. Is there a recipy to put some other than the default values in the PIDs before the performance of the autotuning in order to avoid these severe roll oscillations? For instance to reduce the default ‘P’ values?
I would be grateful for any help. 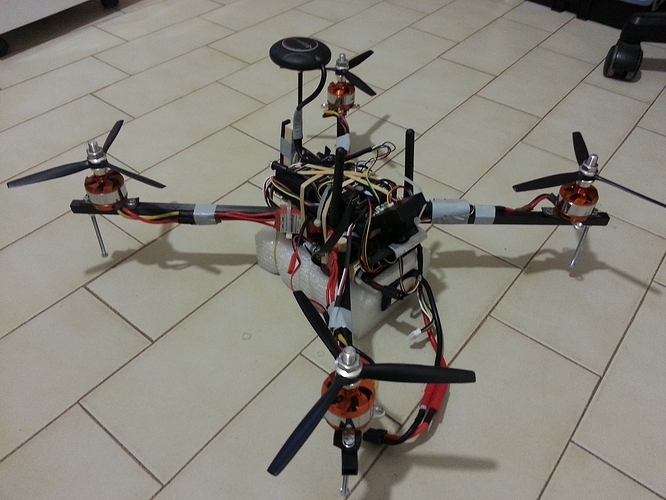 This is a tough one. We can see from the start that motors 3 and 4 are running higher than 1 and 2 indicating it’s fighting a yaw since these motor are on opposite sides spinning in the same direction. Later we see the yaw get worse as motors 1 and 2 start to oscillate back and forth trying to get the copter to yaw back or something.
Can’t tell if there was magnetic interference or the copter was moving around but both compass were recording the same event.
Need to find out why the copter is fighting a yaw in the first place.

I only see what Mike saw in the logs. My first thought was maybe you got a prop slipping, or a faulty motor or ESC.

My second thought, looking at the photo, is that you are only using two of the four motor mounts. How much frame flex are you getting on liftoff? If the arms start to twist and develop torsional oscillation under dynamic load the 'copter will become uncontrollable.

Hi Mike and Chris,
Thank you for your reply. Regarding the compasses, I have deactivated the internal one because during some tests in the ground I had seen a lot of interference from the current. During this sort flight the copter was not really changing its heading as far as I remember. Is it normal that the motors 3 and 4 run a bit higher or not?

I checked the props after the crash and are still tight. Also te motors seem to rotate without any strange behaviour. The arms are from carbon fiber 10x10x1mm and are quite stiff. I tested by trying to twist the arms from 2 opposite motors and you feel the frame very rigid. In the middle I have 2 carbon fiber plates of 2mm thickness that are connected with the rods. (The holes have been made with cnc mill so all the ‘distances’ are the same, the frame is ‘symmetric and balanced’) I use all the motor mounts. Just in one motor I have cut previously one ‘leg’ but I use anyway 2 screws on each motor mount (see attached photo). I have also added small pieces of rubber (from the inner tube of a bike) between the aluminium motor mounts and the carbon rod in order to reduce the vibrations.

What do you suggest to check in order to issolate and try to find the cause. I am thinking to reduce the PID gains first and try to fly again in stabilize mode. Also to repeat all the calibrations (gyro, accelerometers and compass) and ESCs. Can you maybe suggest me how much to decrease? the gains of the PIDs. Thanks in advance. 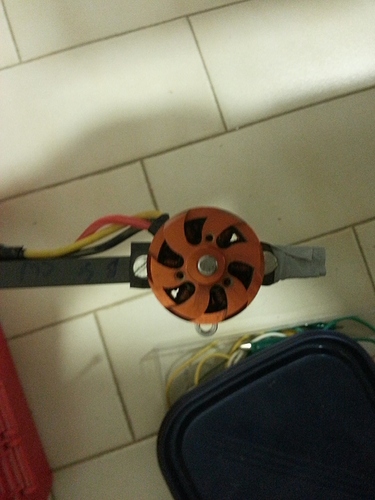 Well, I still worry about your motor mounting. While it may seem “stiff” in a static situation on the bench, what you get dynamically when it’s flying is usually different. If the motors are not staying in their static alignment once the aircraft is airborne, it will cause undesirable flight characteristics. So I would keep that in mind if nothing else works.

You are using Pixhawk, and I am using APM2.8 clone board with AC3.2.1. So this may have changed in the mean time, but the default PID’s for Stabilize were 4.5 in AC3.2.1. If that is still the case in AC3.3 with Pixhawk, I guess I would try lowering them to like 3.0. Take off and fly at about a meter over a software surface like grass or something and see what it does.

But like Mike said, you have uneven motor inputs and that needs to be fixed or looked into. If you tie the 'copter down and run it up all the motors should be running the same speed. There’s different things that could cause that - one of them being frame flex introducing a yaw in one direction, so two motors are trying to compensate. Or it could be caused by a faulty ESC or motor, or poor ESC calibration. Using a strobe tach, or an app in your smart phone to get an idea of the motor speeds with the 'copter tied down at like 50% throttle should indicate whether you have an ESC, calibration or motor problem.