I’m have a problem I haven’t had before and hoping someone can tell me what’s going on,

On the boat I send back depth data to the data page in ardupilot 4.2.1

So I can see the depths while the boat is running.

I use the nema stream data from the transducer to a rs232 to ttl converter. The wiring goes to the Telem2 port on the orange cube.

In the past models this worked fine.

But now I’m trying to create a new system and there are no depths on sonar range or range finder and seem to have 6 rngfnd categories. Before I only had one.

Is there a upgrade in the 4.2.1 that you need to “turn on” the data to send to the computer? 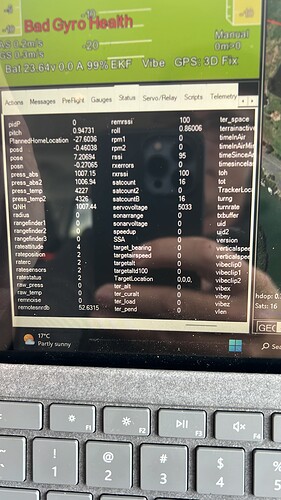 The only thing that looked suspicious in the pics of the parameters is the SERIAL2_OPTIONS parameter being set to 7 which means these three options have been checked:

Maybe do a parameter comparison between the working and non-working boat?

Common causes of serial protocols not being consumed is the SERIALx_BAUD rate doesn’t match the sensor, the TX and RX pins are reversed.

Thank you for getting back to me,

I have compared the param files between a know working system and the new system.

would you suggest for serial2_options set to 0?
Baud rates checked at 115.

I have checked it both ways, I have added and removed

The only difference I can see between new and old is setting 9 was LiDAR now it’s rangefinder.

Is there some way of proving what comes through the telem2 port. Eg to make sure that the data is actually coming into the port. I’ve replaced the ttl converter twice and it works fine… or do I need to turn on a pin?

Is there a different system to compare the param files, as there are differences in the the two files

Can you aid me with this, or teach me I am sure there is a simple fault but for the love of country or money, nothing works and I can’t what is wrong. It’s been 63 hours on this problem in the last two weeks and I’m blind to what’s happening

I also get two new errors to me when arming

Could you provide the two parameter files from the working and non-working vehicles?

BTW, that error message is because the RNGFND1_PIN parameter is set. This should be set to zero because the rangefinder is not using an analog pin to read the depth, instead it is using NMEA (or should be).

Mate, your a legend! Thank you

Ill change that rngfnd1 to 0, I have rebuilt the hardware again but no dice, the problem is consistent

Thanks for the param files. Could you try setting these, reboot the autopilot and try again?

It’s mmworks! It was the multiple rngfnd types not set to 0