When I turn off the remote, RC6 goes to high. RC6 is set to arm/disarm mode, so if radio failsafes, the drone arms… which is a bit worrying haha.

Any pointers on “the right way” of adressing this? I just want to limit any complications I could create by inverting my channels or settings limits etc.

check page 13 of the manual

Thanks! will do this procedure. I wonder why they ship from factory with this behaviour. In what software is this the right behaviour?

no idea never used one.

Depending on how you set up your TXMOD radios, the failsafe condition will be whatever status you have the radio. It’s an old school way of setting up radio failsafes that will send a predetermined set of commands to the FC. The idea is that you setup your radio failsafe with the radio in the RTL configuration to get you home. Works fine. I guess.

The problem is the FC never actually knows you are in failsafe, it only sees RTL and whatever other switch combinations you have setup. Including your arming switch.

It also means that if your change the switch configuration to “dis-armed” then the copter will disarm. So you might want to leave that. I’ve heard conflicting answers to wether or not a quad will disarm in flight like that. I’ve never felt the want to test. I know when I hit the disarm switch close to the ground things stop in a hurry.

Here’s a work around I did for the TXMod some time ago. It’s done in OpenTX but Edge should be the same:

Based on what I’ve read here I know I’m not the only person struggling with the failsafes on the RFD900X. I think I have a work around. My problem has been that when I set up the failsafe as per the RFD instructions the Pixhawk does not recognize the failsafe condition based on throttle failsafe. During testing (turning off the radio) I could get it to trigger an RTL mode so it was functional but not ideal. I’m using: TX16S (2.3.9) and Yaapu Telemetry RFD TXModV2 and RFD900X (Both on 3.16) …

that is a very bad idea to use a mode selection rather than RC failsafe, as it will override other failsafes because it thinks the user is overriding it. like if battery failsafe kicks in and tries to land the machine out of range, RTL selection failsafe would override it and try and make it fly back causing it to fall out of the sky.

The work around that I posted is to prevent those situations. It will trigger a proper RC failsafe.

Thanks guys, this is exactly the type of discussion I wanted to create. I will follow Allisters approach and test everything on the ground before I go further and confirm the trigger is indeed an RC failsafe.

If using PPM then you need to use the “Set PPM Failsafe” button in the RFD Tools, ensure you have all channels how you expect them to remain in a failsafe condition. For example throttle to mid-position, flight mode to RTL.

The best way is to change to using SBUS and the RFD radios will respect the settings you have in the radio, such as “no pulses” for receiver failsafe. This way you dont need to use the Set PPM Failsafe method.

I also advise you to use sbus

So I followed your procedure and it works as expected. Now upon RC lost (turn off radio), the copter follows what I planned in the params.

@xfacta and @amilcarlucas I have tried at first to use SBUS because its so much better on the sticks, be to no avail. I don’t remember exactly what didnt work, but I remember I was getting min/max values jitter in the RC tab in mission planner. I could’nt get the sbus output working steadily.
I will try again and link a video to show what I experience.

Amicarlucas, I followed your post (RFDesign TXMOD v2 with Yaapu telemetry script on FrSky Q7) and got the intense jitter after, hence why I chose to use ppm since I could at least fly that way.

Any pointers are welcomed! Thanks for your help.

I guess you either skipped a step or I was not precise enough. It works fine for me and a lot of other people.

I want to follow the steps to the letter, but i did not see specifics for radio to txmod interface (going to model options and selecting SBUS out for example, which I did).
Here’s the video showing the problem I experience: rfd900 on cube orange, txmod v2 on tx16s. arducopter 4.1.5 - YouTube
Also, both ground (local, txmod) and air (remote, rfd900) radio settings: 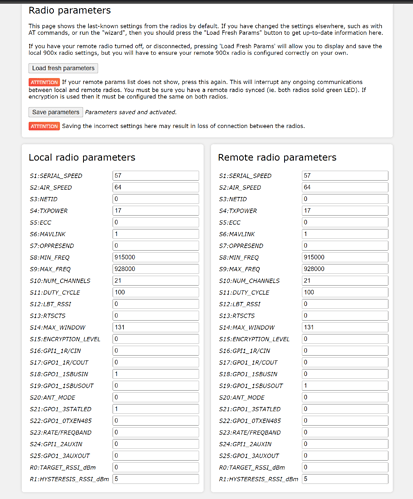 (sorry, I edited my post above with better information)