Thanks for the feedback. That’s helpful.

Dmytro, I have also been using ExpressLRS on some of my miniquads. I just want the two-way Mavlink, which it doesn’t provide.

I would say RFD Mod+Ux receiver all day long it just works,can be a awkward setting it up but when you are up to speed with it it is a walk in the park,I have just fitted an 868Ux to a 3 inch quad and used crossfire antenna’s

Presumably, the decision whether to use RFD or Dragonlink will depend on which functionality you predominantly need.

Dragonlink is available with 433 MHz and 868/915 MHz. With the 433 MHz variant one comes already once further than with the RFD900 as mentioned in the title of this topic.

Here you should look in the same frequency range. In the 868/915 MHz range Crossfire is also quite competitive.

Of course, you can also combine Dragonlink on 433 MHz with RFD900 for Mavlink. Or similar combinations.

What I am mainly interested in is the RC control over at least 50 km. This is possible with Dragonlink and also Crossfire. With RFD900 I am not sure. These distances go but contrary to advertising not without further out of the box.

For these or greater distances, I myself have not yet seen a system that can then also Mavlink bidirectional. Maybe someone has a tip?

RFDesign itself specifies around 40 km max. That’s good, but not enough (for me).

And can apparently with the TXMOD only PPM with 8 channels …

EDIT: sorry, I’m not an RFD salesman, but I have been impressed

The TXMODv2 will do 16 channels PPM or SBUS, it’s not limited to 8 channels. It can even translate → PPM on transmitter end, SBUS on receiver end, for example.
You also have the option of using the Yaapu telemetry script on suitable transmitters.

When you are considering CompanyA says 40km and CompanyB says 50km , that’s getting into the “do the tests yourself” territory. I know the RFD’s can go a lot further. The RFD radios are used by professionals in all kinds of situations (as is Dragonlink too apparently)
Is it a want or a need? What’s your likelihood of actually getting out to 50km range. I think standard RFD radios would have no trouble at all with 50km for an aircraft. If you are worried put your ground station radio up on a pole or use a yaagi, but 50km is “we do that every day of the week” for these.

Depending on your terrain and local laws, permits and so on there could be special versions if you were to contact RFD - it really depends on your requirements. 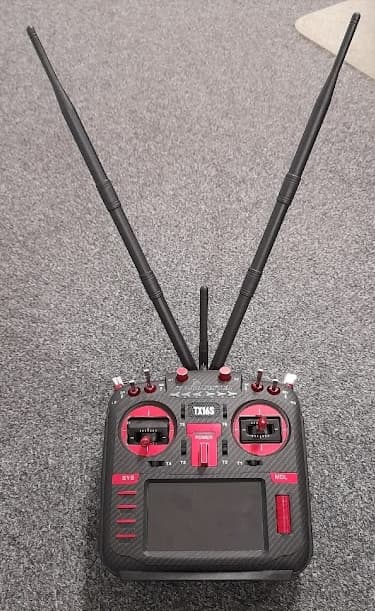 I’ve seen 16.5 km with two RFD900X’s , standard antennas, stubbie antennas on the aircraft. Both radios effectively at ground level inside brick buildings. 115k baud, like they were next to each other. One radio out in the suburbs, one in an industrial area. Here’s the elevation profile between the two points. [image]

I believe that with any RC system with Mavlink integration, the telemetry does not go much further than 30 km (my tests with Dragonlink and Crossfire). It is much better for the range if RC and telemetry are separated (so as an example Dragonlink only for RC and RFD900 only for telemetry).

I myself have had good experiences with transmitting Mavlink telemetry via UAVCast (LTE, 4g, 5g).

How many channels are transmitted with TXMOD? Is it really only possible to use PPM with 8 channels, or can SBUS also be configured? (Ok, I saw your edit, thanks for the info!).

I know TXMOD will do at least 16 channels with PPM or SBUS. I have that configured and working.
As far as I’m aware the RC control would go as far as the telemetry - both rely on the same radio link. The RFD’s dont use a separate frequency range for RC or Telem.
I know the standard RFD gear will do easily much more than 40km. I think the specs are conservative.
Like any RC set up, it would be important to properly configure and test failsafes.

wow that is impressive Shawn,thank’s for that have a nice weekend

I just checked with someone

Is there any evidence for this? For example, a log and a setup description?

Unfortunately the logs from those flights cant be made public. I do know a few people who’s job it is to do such flights and this sort of thing is common place.
I believe their setup is similar to what I use (115k baud, SBUS RC control) or possibly higher data rates in some cases.
The default settings for 57k baud is very dated and suits the common cheap telem radios.
I’m not licensed to do anything more than VLOS so I even use the RFDs on lower power than standard (27db) just to save a tiny fraction of battery power.

I don’t have any experience with Dragonlink.
Best to assess the radios yourself and make your own decision - as I said be sure to set and check failsafes. It can be hard to check range with “long range” radios.

Like a lot of things in this sector - see if the manufacture can supply real, meaningful specifications and any test data.

Thanks for the input from everyone! I don’t plan on going anywhere near 40km, so the ultra long range is not a concern for me.

I actually owned a Dragonlink about 10 years ago, so I figured I’d just buy that again, but after reading everyone’s opinions and weighing the differences, I’ve decided to give the RFD900 TX MOD a try this time around. I will let everyone know how it works out for me.

I believe their setup is similar to what I use (115k baud, SBUS RC control) or possibly higher data rates in some cases.

Is there a chance to get a screenshot of your configuration or of “someone”?

For example, it is relatively unlikely that a 900 MHz system beats a 433 MHz system in range. In this respect I am very skeptical that a RFD900 incl. full Mavlink should reach 70 km. It seems to me that there is some exaggeration …

This radio didnt have RTS/CTS set when I took this screen shot, nor was it doing RC control. It was intended to be just a ground station radio. The Air speed and Baud rates are what I’m currently using though. 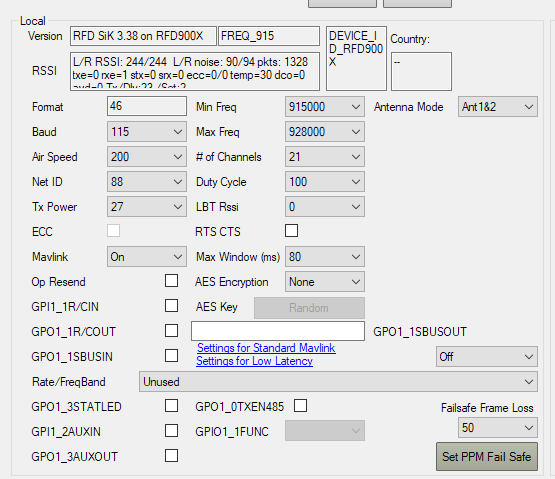 The TX Mod is using those same settings (plus SBUS and RTS/CTS) and it provides telemetry data via Wifi to the ground station, and we have yaapu scripts running on the Taranis and TX16S.

As you say 433MHz could theoretically go longer distance than 868 or 915, but in reality the power and channels available in 433MHz is severely limited due to the fact that most countries use that 433 range for garage door openers and all manner of random devices.

There is no such thing where I fly

Fact is, there are hardly comprehensible long range reports with RFD900, but very well with Dragonlink. Also discussions / experience reports around RFD900 are hardly to be found. The system may be quite good, but unfortunately it is hardly used.

The range of a RC system is one thing. It becomes exciting, if full Mavlink is to be transmitted with the system. 70 km is certainly not an achievable range with an RFD900 stock setup. And certainly not with a TXMOD in the handheld transmitter. At least a relay on a tripod is necessary to achieve at least approximately good ranges.

Also a lot of components has interference on 433 band. As far as I know the problem with F765 controllers isn’t fully solved with dragonlink.
868/915 band is much easier to avoid any kind of interference.

That’s not the point … but with which system you get as far as possible when full Mavlink is required.

how do you no if you have not tried the system,you are implying that people are lying obviously you have a vested interest in down playing RFD