DIY fishing Kontiki Catamaran– I want to be able to enter the coordinates for a single waypoint and have the Kontiki go to that point & stop. Recovery is then by electric winch. I anticipate external GPS/Compass module/s and ESC ‘Skid’ steering using twin thrusters (One in each hull). Could any members please suggest recommendations for the simplest controller hardware that would be best for this purpose. The sheer volume of controllers is confusing. Thanks in advance.

Good day,
as fc you can look for the mRo x2.1 with F4 MCU… you can customize it for all the purposes you need.

Thanks for the responses. Maybe I should clarify further.
Just looking for suggestions for hardware to complete a one-way 1 - 2km ‘Way-Point’ journey at the lowest possible cost. Plan on using a catamaran type boat & recovery by electric winch, so only a single waypoint considered.
My requirement is to ‘skid-steer’ a course to a Single set waypoint with brushless motors, appropriate ESC’s & GPS/Compass module, with no frills and no intention of expanding capabilities in the future.
Any suggestions for the suggested minimum hardware & ideas to accomplish the task, without RC gratefully received.

You need RC to setup, configure and calibrate the system. After that it’s possible to control the craft with just a ground station (laptop or smartphone). Barebones to hit a waypoint:
~$35 flight controller
~$25 GPS module
Motors depend on actual application, many boats have brushed/DC motors
A couple ESC’s for RC Trucks.
RC system.

Cheers, thanks for the feedback. My only experience with controlled GPS is with robotic lawnmowers, my model does have GPS but is programmed with Flash chip & fluxgate compass. Anticipate RC for initial set-up but after that just set gps coordinates for start & finish in a straight line from portable laptop and switch ‘Go’. Any recommendations for suitable ‘controller’ & GPS/Compass’ modules compatable with Ardurover ?

There are many to choose from. These are some lower cost options:
Matek F405
Kakute F7
Omnibus F4 Pro

For a few $ more a Pixhawk 2.4.8 is a good option for many. It’s in a case with connectors. Not as much soldering to do.

Any M8N GPS with compass module will do.

I have a somewhat similar requirement to Tony (though I’ll use RC). I have a Matek F405 SE. Any attempt to calibrate the accelerometers results in the software on the PC (Windows 10) hanging. Any suggestions?

Thanks Dave. I upgraded to Beta (1.3.74 build 1.3.7773.21583 ArduRover V4.0.0 (0e52bafa)). Trying to calibrate level results in an error:-failed to level. But at least it doesn’t hang the program as it did previously. But MP disconnects and can only reconnect if it is restarted. When it is connecting, an error appears in the AHRS screen (?) saying “Config error: Baro: unable to calibrate.” Also tried calibrate Accel (ie in addition to calibrate level) - similar results. Now when I try to connect without reloading the application, I get a Getting Params 1 dialog box (“Got param RST_SWITCH_CH”) but can’t close that dialog box. So I have to close the program from Task Manager. Seems a bit flakey?

Yea it does. Perhaps flash it again after loading Plane or Copter to reset to default.

Thanks Dave.
No improvement I’m afraid. That’s with beta version of Mission Planner and beta version of firmware (https://firmware.ardupilot.org/Rover/beta/). But perhaps I didn’t follow your suggestion? When you say load plane or copter, you mean flash with firmware for one of those rather than with ArduRover? But would I not then need to write over that with the boat version?
Sorry to be annoying - but I’ll be mighty pleased if I can get this sorted.

Yes, flash Plane then Flash Rover. That will start you at default. It’s loading the F405-Wing Target right? 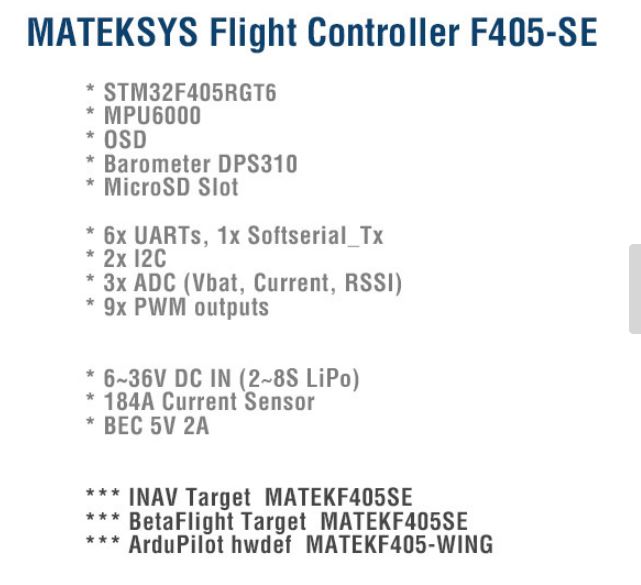 Download the .apj file from here and use the Load Custom Firmware option.
https://firmware.ardupilot.org/Rover/stable/MatekF405-Wing/

OK, I’m a goose (thanks for NOT replying with simply RTFM…). The rover F405 wing firmware (from here https://firmware.ardupilot.org/Plane/beta/MatekF405-Wing/) allows level calibration.
Sorry to be a PITA, but, I don’t see anything on the board (or pictures) which indicates board orientation. Perhaps the micro-USB port is top and front? Or is there some other convention?

Plane? Thought you wanted Rover (Rover thread). But whatever works. As @Joao_Fonseca says. USB up and to the left of forward flight. That’s what the big arrow shows anyway. If you don’t want to mount it that way no problem change the orientation parameter.

Thanks Dave and Joao. Yes, Rover wing now installed and calibrating fine. And I can’t believe I couldn’t find the orientation arrow…