Hello I recently have attempted to rebuild a android studio project for Tower. But because it is so old there are tons of errors being thrown and the gradle version doesnt work.
if I do get it to work will post!
thanks in advance!

Would love to see this done! I had the same problem trying to compile.

Any news for the updated version??

Nobody (or at least nobody known) is working on re-developing and maintaining the Tower app. TBH, I think it’s pretty unlikely that will ever happen. AeroHawk forked it about a year ago, made some fixes so it will work on newer versions of Android, and released it under their own name, “Mission Maker for ArduPilot”. However, that is no longer in the play store, so I presume they are no longer maintaining or supporting it either. The only one there is their DJI version.

So as far as Android based applications go, your choices seem to be QGC and Solex.

Nobody (or at least nobody known) is working on re-developing and maintaining the Tower app. TBH, I think it’s pretty unlikely that will ever happen.

I have a compiling version, notice the text in the black widget. Tell me please how to publish this. 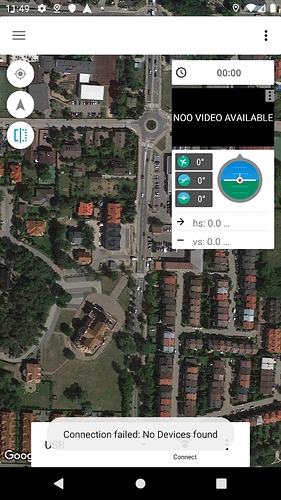 Have you forked the repo? if not, you should fork and merge all your changes so doesn’t get lost. Would be great if you can publish the app in your fork.

OK, thanks for the answer. My fork is here:

Ground Control Station for Android Devices. Contribute to maciek252/Tower development by creating an account on GitHub.

I have also managed to compile the dronekit, will also fork and publish this.

Iam sorry sir, i have the problem on your project. I fork your project, and i build on my android studio and i have a problem. How to fix this error?

I’m sorry, it seems that I haven’t commited the last changes. Could you check now?

@maciek252 - as I don’t have the tools or the skills to compile my own version of Tower, could you please provide me with the .APK that I could then install on my Samsung Galaxy S9 phone (Android ver 9)?

OK, I’ll compile, check on my phones and post if everything is fine.

Thank you @maciek252, I still find Tower the easiest tool to use. Appreciate your effort.

It would be fantastic to see Tower come back to life again.

A version not signed and completely not fixed - lots of things to be updated. For example, the API for offline maps has changed. But at least it compiles

Can I assume that you are going to continue to work on Tower to address the “lots of things to be updated”?

BTW, what do you mean by “A version not signed”?

I will try to solve some issues, it’s interesting to learn how far the android apps have moved during this years… Right now I’ve partly fixed the offline map problem delivered by mapbox. I’ve made it working but not for satellite views - it complains about missing tiles, maybe the size of the tiles has changed? For sure the API has changed, no more need for “mapbox id”, only the token.

Also the version I’ve posted will not show maps because there’s no google API key. I’ll do it like it was for mapbox: the API key will need to be introduced into the configuration settings for every user. Or maybe I’ll try to use my key at least temporarily.

If an app is not signed, the phone will complain that it’s not safe, can’t be verified etc

I wonder if taking the map loading/caching from something like QGIS Mobile/Input/QField might be easier, and allow for more map services easily.

No, Tower is Android as it was for 2015/16 - some Kotlin already but no MVVM, no coroutines etc

Mapbox is fine when it comes to Android, I think. Interesting that originally Tower was maintaining the tile download on its own, but this is also supported by Mapbox and it has fall back to this option when the Tower’s tiles manager stopped working… (but for plans, not satellite photos).

These are the repositories I was referencing. I was curious if perhaps any of the rendering/caching code for the tiles would benefit your work at all.

Survey made easy (Android/iOS/Windows app). Contribute to lutraconsulting/input development by creating an account on GitHub.

A simplified touch optimized interface for QGIS. Contribute to opengisch/QField development by creating an account on GitHub.

Hello everyone, maciek252 thanks for the application. I have a problem, when i try to connect to the SITL jmavsim, it shows error
Caused by: java.lang.NullPointerException: Attempt to invoke virtual method ‘java.lang.String android.net.wifi.WifiInfo.getSSID()’ on a null object reference
at org.droidplanner.services.android.impl.utils.connection.WifiConnectionHandler$1.onReceive(WifiConnectionHandler.java:103)
Who know how to solve it?