I have been flying rc1 since it first came out… I needed ‘boat mode’ Thanks Randy / devs!!! I did not install rc2-3-4-or 5. I just installed RC6 and must say I was astonished at the improvement! I just flew in 0-20 mph GUSTY winds… pos hold was flawless. It held it’s orientation within a meter easy I couldn’t believe it. Alt hold with only baro seemed much improve as well although I really didn’t fly more than 1-3 MPS yet. I have not had time to fly a mission to test the robustness of other aspect of the code but my first impressions are WOW it just keeps getting better! Hoping to fly a mission this weekend and post a log for reference. Thanks devs … I really appreciate your hard work for what must seem at times as unappreciated .

Have you taken off from a rocking boat? Does it work reliably?

Yes many many times with no issues with rc1. I have not with rc6 but nothing changed with regard to that I don’t think. There is a setting to tell it to only calibrate the first time, I forget what the setting was or if I had to change it from the default, maybe somebody could chime in on that, I don’t have access to my parameters at the moment. But yes it works great!

Here it is. Funny I thought there used to be 3 options. But anyway… set to never for boat mode. 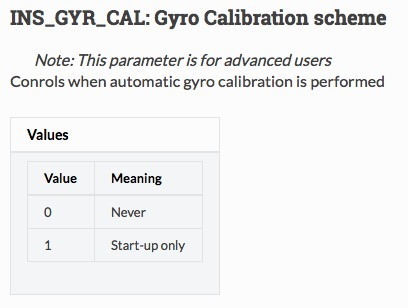 Thanks for the feedback and the extra info on “boat mode”. I think it probably use to have a 3rd option which was “At startup and first arming”. I think I’ll create a wiki page for this feature.

I think that when taking off from a boat it may just work even without turning off the gyro calibration but it may not - it’s possible that it will fail a pre-arm check if the gyro calibration fails. My guess is that as a minimum, if the parameter is left at it’s default of “Start-up only” that the gyro calibration will take a long time to finish (i.e. 30seconds) and then even after that the pilot may need to wait another minute or so for the EKF to settle down.

Thanks again for the feedback!

The image at the bottom is a bit big so it takes a while to load but I’ll sort that out in a bit.

Thanks again for the testing!

When I first tried to fly off my boat with 3.2 it would arm but take a very long time BUT it also was very scary because many times it would think it was out of level and compensate so it had a nasty drift. That made it rather interesting to get it back in the boat! When I installed 3.3 [ or maybe it was a later version of 3.2 rc? I forget ] I lost the ability to fly at all it just wouldn’t arm… so I was thrilled when boat mode arrived!! Incidentally just holding it in your hand and moving it even very slightly replicates being in a boat close enough to test.