I am using Spektrum DX6e Transmitter with AR610 receiver, and using an Usmile PPM encoder (https://www.amazon.com/gp/product/B019V59KCS/ref=oh_aui_detailpage_o03_s00?ie=UTF8&psc=1) to connect to pixhawk RCIN. I connected the IN1 in the PPM encoder to AILE (Roll?) on the receiver, IN2 to ELEV (Pitch?), IN3 to THRO (throttle?), and IN4 to RUDD (Yaw?). Then in mission planner, I could see ch1in, ch2in, ch3in and ch4in were responding to the transmitter roll, pitch, throttle, and yaw. However, when I did the RC calibration, what happened was, Yaw on the screen was controlled by throttle stick on the transmitter, pitch on the screen was controlled by yaw stick, and roll and throttle on the screen were controlled by NOTHING. This was very weird to me. Is this a problem from the transmitter, the PPM encoder mapping, or the mapping in ArduCopter 3.5-rc1? 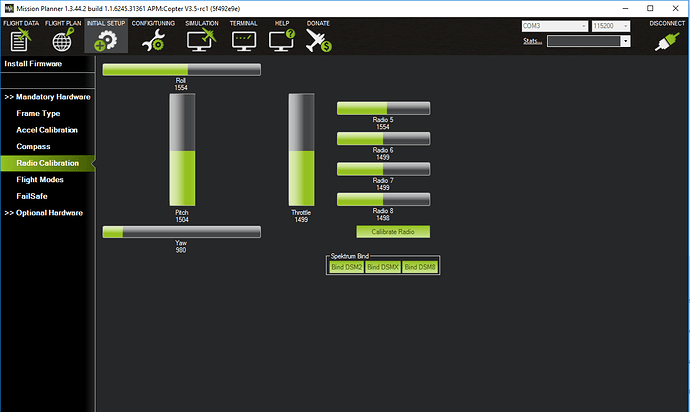 I would say that the PPM encoder has a lot to do with it.
Were those the only 2 channels responding during calibration?
Have you tried swapping the input/reciever cables around to see if you get a different response ?
Do any of the transmitter switches have an effect?

If you are using spektrum have you tried the direct connection of the spektrum satellite to the pixhawk?
It could be a 6E problem as well.
The PPM board states it is setup for 8 channel but you are only running 6.
Could be a problem.
Do you have a programmer for the PPM card?
They seem a bit short on documentation .

A direct Spektrum satellite connection would be the simplest way to go.