So my FSI6 TX died or is so corrupt the settings dont change though they indicate they are.
At the time of its death I was just getting around to setting up AP. I was using the PPM output of the receiver. All worked well.
I then replaced my TX with a RadioMaster TX16S OpenTx.
I can bind with the same receivers just fine but I see no option to use PPM mode in the transmitter itself like I did with the Flysky.
Or I dont know where to access it.
Now having more channels available I also guessing SBUS, IBUS or other might be a better route.
How would I do the physical connections with Cube? Can I still use RC IN?

How would I do the physical connections with Cube? Can I still use RC IN?

Sbus or iBus to RCIN

Both of these protocols can be done with just 3 wires back to the cube, correct?
Is there a setting I need to change for the cube to interpret the info correctly?
It was pretty straight forward via PPM or so it seemed.

Is there a setting I need to change for the cube to interpret the info correctly?

No. It detects the protocol and works.

Do you recommend 1 protocol over the other? I am guessing the wiring would be different for each? Any links on the physical connections? I have seen so much info in the last few weeks and most is from lost souls that leads to no solution

Yea, Sbus. And no the wiring is the same for PPM, Sbus, iBus.
Cube
Arducopter RC

Dave I cant thank you enough. I did get it communicating as far as I can tell.
I do have some form of operation though control is not the word I would use.
Being a new radio, operator and systems there is plenty to set up. I havent calibrated anything or verified channels and or modes yet. (Got the new radio yesterday as my FSI6 went crazy, maybe I can fix it later) But I do see a solid red on the receiver bind and a single stick controlling throttle and turning but it starts up spinning in forward, I do have the drive disconnected. Anyway thanks again and you can expect more questions.

I forgot to ask, with the receiver in IBUS or SBUS will I be able to access more than the channels of the say 6 channel receiver? I seem to have read the PPM was limited to 8 and it required the matching receiver/channel. Hope that makes sense.

I forgot to ask, with the receiver in IBUS or SBUS will I be able to access more than the channels of the say 6 channel receiver?

That depends on the receiver. Many are 16 chan Sbus. Perhaps you should buy a new Rx that does? Radiomaster R161 or any ACCST capable Frysky. There are others.

That last question was more out of curiosity of their potential.
At this time I cant imagine what 8 channels are needed for a mower.
Next week I will know why 10 is necessary

It is Bezo’s fault anyway. They delivered it the same day at 4-7am and sure enough it was there when I woke up. Should have plenty of capability in the TX dept. I will look into those mentioned.

I think the R161 is off the market because of a copyright issue. Too bad because they were great little receivers and I wish I had a got a few more. The Jumper R8 is a good alternative but it’s physically a bit bigger.

Ah, that’s why they are out of stock everywhere. Hard to tell these days because so many things are. I’m using Frsky R9 on almost everything but transitioning to Crossfire with the next build and then slowly everything else. Like when I ditched Spectrum stuff years ago for Frsky

The transition from Spektrum to FrSky compatible gear was pretty smooth and made sense. The move to crossfire has been slow and challenging. But I’ve had some breakthroughs on that front so I’m feeling less like I wasted a bunch of money.

Is this one you all are talking about? I actually looked it because of this post.
I need a better transmitter so was looking at the TX16MAX and that receiver. RadioMaster R161 Frsky D16 Compatible 16 Channel RC Radio Receiver - Buddy RC

I do have a RFD TXMod2 (once I extract it from a cheap jumper TX).

But if you guys have recommendations for 2.4GHz telemetry & receiver you think I should have I’ll add it to the cart?

Sorry for the thread jacking a bit

I’ll contribute to the threadjack because I know the OP has interest in my own project.

I really like the FrSky Horus X12S and their RS-series receivers. The transmitter gets a bit of a bad rap with the RC purists because of its odd form factor, but I think that’s why it shines for our use. The color screen is right up top, and with OpenTX and SBus or FPort, the Yaapu telemetry scripts run perfectly, allowing for a REALLY cool HUD with MAVLink messages.

The obvious disadvantage to the X12s is cost - it’s twice the price of the Radiomaster stuff.

To bring things back on topic - do you need 8+ channels for a mower? Nope! But can you exceed that capacity? Easily! Here’s my channel lineup at present:

Here’s a pic of the X12S in action (connected to an Archer RS via FPort): 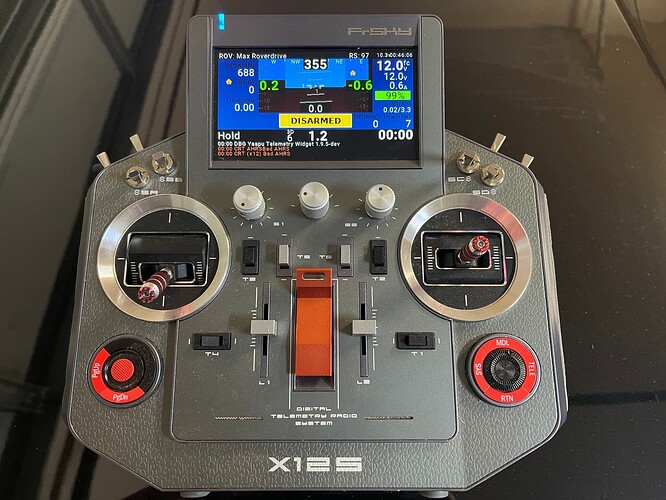 EDIT: Oops. I didn’t realize the model numbers were primarily referencing receivers until just now. I’ll leave the rest of the post unedited, but I guess it wasn’t as helpful as I was hoping. For what it’s worth, I’ve had good success with SBus + telemetry and FPort + telemetry using an R-XSR and Archer RS from FrSky.

And just yesterday I couldnt see a reason for 8 channels. Yuri cured that.

I am in a crash course and need all the info I can get.

Yuri that is a nice radio. Are you using EdgeTx or have any intent to? I personally would like the touchscreen integration. Not sure of the other pros/cons.

On your physical control set up, do you run Mode 1 (throttle 3, steering 1 all on the right stick?)
And do you set the trims if needed in your transmitter or flight controller? Or both?

But if you guys have recommendations for 2.4GHz telemetry & receiver

I don’t have many models on 2.4Ghz but the ones I do I use Frsky R-XSR with a Radiomaster. But with those R161’s still available from BuddyRC why not!
Running EdgeTx now which is really nice. Native Mavlink support will be cool but some months out.

I use OpenTX. I haven’t found a compelling reason to make the switch to EdgeTX. It seems to me the only reason to run Edge is to take advantage of a touchscreen, which the X12S lacks.

Even if I had a touchscreen, I can’t imagine using it to configure the rather complex logical switches and functions I use, anyway. I’d rather use the Companion software and save a copy of the settings while I’m at it.

As a general rule, do not touch the transmitter trim switches when running ArduPilot. Do all of the tuning in software.

The left stick on my transmitter is effectively dead when I run the mower. The right stick is combined throttle and steering. But I know that @ktrussell prefers the two-stick setup (throttle left, steering right).

So during this preliminary learning tool aka the mobility scooter base. I am using a Sabertooth 2x25 motor controller.
My settings are as you describe regarding gimbals but I notice a little movement of 1 wheel at idle. I can adjust it with the trim on the radio. I am sure there is a setting of some form to correct that. Just not sure which one.
On to tuning switches for flight modes.

Adjust the SERVOx_TRIM parameter. Generally, your radio should output 1500us at neutral stick.