I have been using this board and switch during years on a quad, having upgraded its bootloader time ago. It is not easily recognized at firmware upgrade, so I use QGC option custom (.apj file). K170725 led flashes, and stays fully on after pressing the safety switch.

At the field, K170725 led was off, the safety switch warning was heard, and pressing it nothing happened, so I did BRD_SAFETYENABLE=0 for flying.

At home, after changing K170725 and its cable nothing changed (led off), but flashing the previuosly working 4.10 ‘latest’ dated 20210403 the led flashed again, just after QGC finishes flashing, with only the USB cable connected.

It seems there is some problem on this board around pins programming related to Radiolink buzzer/led/switch K170725, unless I miss something.

So the change happened on april 6 probably.

Great, thanks for testing 4.1 and reporting back. We’ve got one or two of these boards floating around with the dev team so hopefully we can get to the bottom of this.

I don’t have a solution but a question for you. I also have the radiolink but the v1.0 ii.
I can’t get is past the 4.0.3 update, will it be possible for the v1.0ii to upgrade to the newest firmware?

Here (first not working) appears:
HAL_ChibiOS: fixed DMA sent calculation on UART DMA timeout
So may be this had a side effect on some pin functioning.

upgrade to the newest firmware?

In the beginning I experienced some incompatibilities, which were solved upgrading the bootloader.

If you are familiar with electronics and have the board at hand, you can follow the method described here:

After that, for flashing I have always downloaded the arducopter.apj file from https://firmware.ardupilot.org -> https://firmware.ardupilot.org/Copter -> (version) -> mini-pix (or mini-pix-heli), and flashed it with QGC -> Vehicle Setup -> Firmware -> Ardupilot -> (connect with USB cable) -> Advanced settings -> Custom firmware file… -> Ok -> (navigate to downloaded arducopter.apj)

Thank, will give it a go

I think @peterbarker is going to dig into this one. It is also on our 4.1 issues list so it won’t be forgotten.

Thank, will give it a go

Let me say that I don’t know the exact version I have and it is mounted heavily buried. It was purchased from Aliexpress on sep. 5 2018, and on the order photo appears “V1.0” as above.

It has been working very well, and I am using it with current MP versions (not the Radiolink one).

You’re lucky - there are two versions of the the Mini-Pix v1.0 - the
original, which has the relatively expensve ramtron module on it, and the
new one, which doesn’t. The latter can run ArduPilot - but you need to
jump through some hoops to do it (and the hoops are on fire, as I
discovered today as I tried to jump through them again).

Honestly - not a great autopilot, but really cheap

We’ve had these
things fail catastrophically in some interesting ways, and the vender
hasn’t abided by our license which requires them to supply source code for
binaries on products they ship.

I have got mine on banggood and the same photos was shown but when I received the mini pix the
“V1.0 ii” is printed on the plastic cover. The flight controller is still working fine with the 4.0.3 firmware, would like to have it up to date with latest firmware.

I was thinking just dump the mini pix and buy a new flight controller that is compatible with the firmware.

would like to have it up to date with latest firmware

Although it seems that my version is previous, for flashing there could be no difference, as the two USB data signals should reach the processor directly. Anyhow, for flashing you should disconnect anything that could overload the USB supply pins (GPS/compass, rangefinder, display, etc). Updating the bootloader would be good.

On Ubuntu I have downloaded the latest QGC and tried again. Although other times I had observed (may be with other OS or other QGC version) that the board was not recognized and therefore chose a custom file, this time I observe that QGC recognizes the board and can program any version without manual intervention. This would be the full sequence: 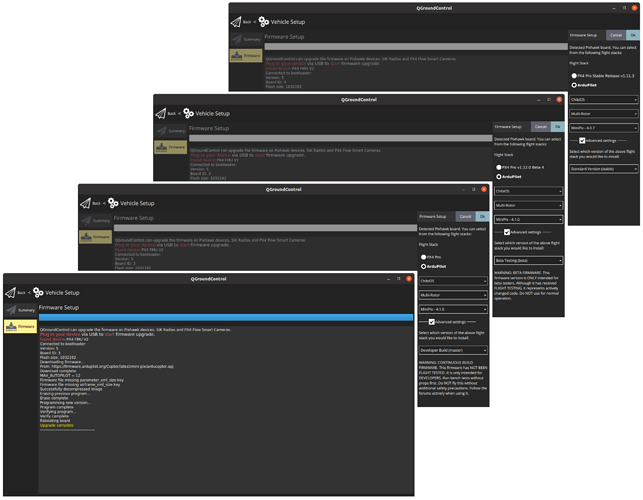 At the bottom appears the ‘latest’ version flashed, although remains with K170725 led off and switch problem.

The board strangely appears as if with 1MB flash; this has happened always.

As a side note, at the moment we don’t support the Radiolink MiniPix V1.0 II hardware. This is the manufacturer’s latest hardware that is missing the RAMTRON chip for parameter storage.

Maybe we will add support for the board in the future but there are no guarantees because the manufacturer isn’t cooperative. I’ve updated the warning on the wiki.

This is the patch which killed it:

@andyp1per - any ideas? I think these are just GPIOs, so I don’t understand why your patch would directly break things…

A fix for this issue has been merged into master.

Thanks for the detailed report, @Webillo !

Yes, I have a clone Pixracer with Tradheli with a common led/safety switch, and it had also stopped working.

A fix for this issue has been merged into master.