Radio Failsafe Upon throttling up?

Not entirely sure what change - I was doing some test flights with a new quad just fine. Decided to re-locate to a bigger field to auto tune it, but now when I throttle up about to take off (it lifts off the ground a tiny bit), a radio failsafe is triggered and it goes into RTL mode.
I have a Taranis QX7 + Frsky rxsr, with the Taranis set to no pulses…quad goes into radio FS under normal conditions (turn off receiver or turn off transmitter) just fine and as expected, but doing this at take off seems odd. Something of interest is - my transmitter will let me know when it’s lost connection …it doesn’t complain about a loss of connection during take off, so it’s something localized to the FMU.
Using an Orange Cube with custom carrier board. As mentioned, it was working just fine yesterday and earlier today.
Thoughts?

Any help would be appreciated!

According to the messages and the error codes the radio is going into failsafe.

One of the codes translates as:

Late Frame : no updates received from receiver for two seconds

I also see a number of EKF Compass Variance errors. The compass graph shows it’s not in good shape. All this is making me wonder if you have some kind of power issue. Perhaps power wires too close to the compass or the receiver or some other interference causing issues.

I did notice a persistent EKF3 IMU1 MAG0 ground mag anomaly, yaw re-aligned shortly after take off, though looking at MAG0 & 1, they seem very close to each other - hardly any variance. Can you clue me in on which metric you are looking at?

Also - there is a mag in the Orange Cube obviously, but I have the 2nd mag built into the carrier board isolated, so there isn’t really any wires aside from the wires for the radio receiver.

I switched the external compass to priority 1 as well as re-route the receiver cable (I believe it was strained, causing issues when not stationary - scary TBH). Will go test shortly.

Also makes me question my choice of the QMC5883 for external mag. I think I’ll switch to a more reliable and available BMM150 or MMC5983.

Ugh - same issue. I noticed the signal pin for the receiver is next to the ESC power traces. How susceptible would the signal be to high current traces?

Here are the graphs from the two compasses: 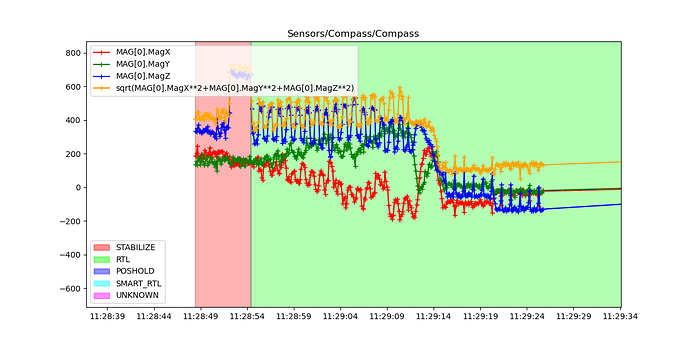 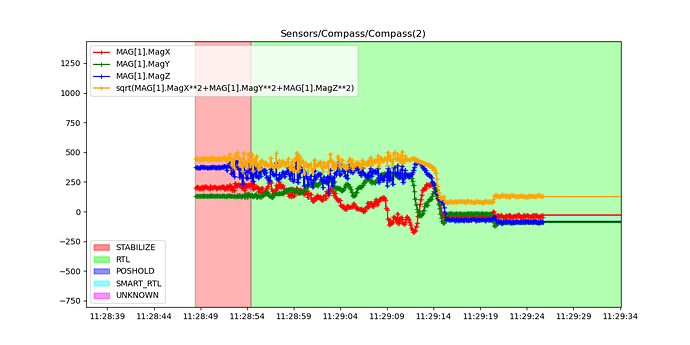 The compasses can be very susceptible to issues from high current lines. It’s always best to move that if you can. I also suggest you look at using MagFit and getting COMPASS_MOT parameters setup.