Questions Switching from APM 2.6 to Pixhawk on Helicopter

Thanks to all in advance.
I know some of this topic has been asked before, but I never found a complete answer?
Is the Pixhawk to reciever wired the same as the APM 2.6 using the Futaba setup (Futaba setup is what I use now on Apm)?
Thanks

Is the Pixhawk to reciever wired the same as the APM 2.6 using the Futaba setup (Futaba setup is what I use now on Apm)?

No. The Pixhawk requires a single input for all channels. So you can use either a PPM encoder that combines all of the channels into one input or use an SBus receiver. I would recommend getting an S.Bus receiver if that is compatible with your transmitter. I have a 3DR PPM encoder but I wasn’t that impressed with it. I have switched all of mine over to S.Bus receivers. If you want to try the PPM encoder, I would be happy to give you one. I have no use for it. Private Message me if you are interested.
Bill

Sorry Guys I asked this question all wrong, getting old brain fart.
I mean the wiring from the pwm receiver to the ppm encoder, notice in the attached wiring for Futaba image some of the channels are crossed.
Question should I cross channels wire from receiver to ppm encoder the same pattern?
Thanks again 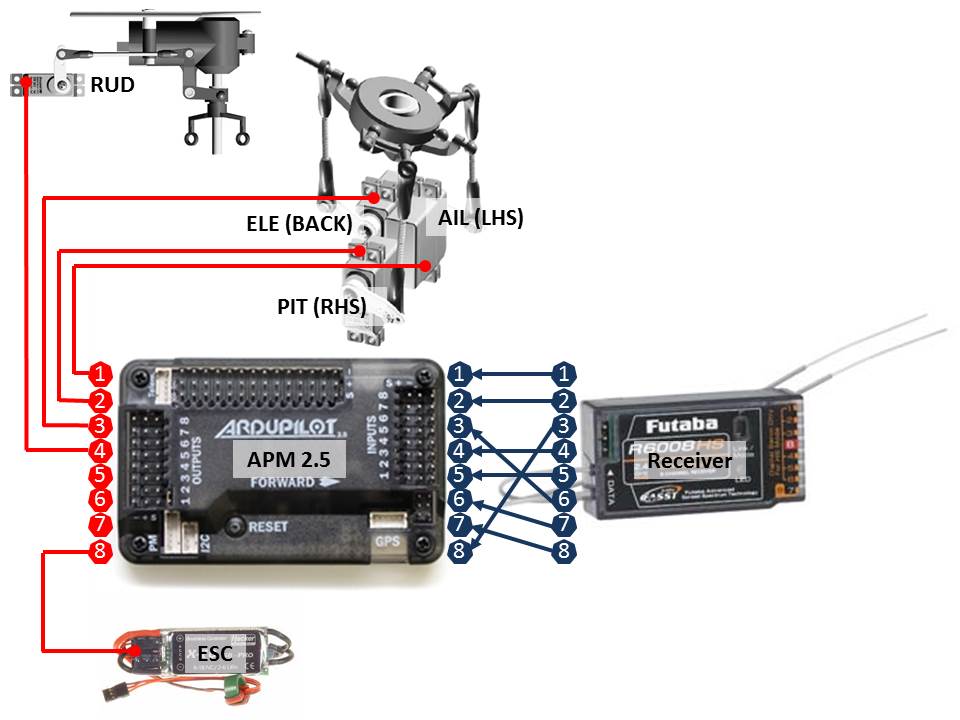 William,
I think it depends on your setup with APM. My personal thought is that you should not cross the channels as shown in the figure. It should be a straight one to one matching of channels. Just like it would be if you used a spektrum or sbus input. Right now the biggest limitation to the tradheli code is for helis with out a governor. And even then connecting it up the way it is shown in the figure will cause issues with trying to use autonomous or althold modes because the autopilot doesn’t know what the throttle should be set at for a given collective setting. RSC Mode 3 attempts to give some throttle curve setup but it is limited because it is a 3 point curve and is a linear interpolation between points.

I think it depends on your setup with APM. My personal thought is that you should not cross the channels as shown in the figure. It should be a straight one to one matching of channels

The reason those channels are crossed is because with the Futaba heli gear the throttle is on Channel 3 and collective on Channel 6. And it can’t be mapped in the radios. That diagram is quite old now, as most modern radios support re-mapping this, or using an “airplane mode”. But it still may apply if a user has that older gear that was designed for heli’s.

use Futaba radio and I don’t use a heli model in the transmitter.

You probably have one of the newer microprocessor controlled radios. It seems to me back in the day Futaba made some helicopter-specific radios, and no airplane option in them. This was back when most people were still flying mechanical CCPM heli’s, flybars with radio CCPM mixing were really advanced technology, and Futaba had not even invented the GY-401 yet. And that’s where the concept of crossing the channels in that photo came from.

Got it. Thanks. I wouldn’t think anyone would be still using a radio like that. But I guess you never know

Yeah, actually some old-timers still do. I think there’s a couple of those in our RC club. Futaba also made some airplane-specific radios.

They actually still do that to a certain extent - the Futaba models like the 14SGH are helicopter-specific, that’s why the “H” on the end of the model number.