Thanks to some very clear directions here on how to build Ardupilot in the new Windows 10 “native” Linux subsystem (“WSL”), I was able to install WSL, make, gcc, et al, clone the master locally, and build it with no apparent errors. I haven’t flown the resultant hex, but am fairly confident in the results, and saved the entire dialogue.

Now I want to clone a different branch off master, and build it. It’s night_ghost’s HAL port to the Revo Mini class of FCs. I can’t tell who authored the WSL how-to doc, but thank you. Is it possible someone could give me a few hints as to how to then compile an alternate branch of Ardupilot (just ArduPlane, actually), having successfully built the master? According to night_ghost, the following should work:

I am having some problems with the above steps, and thought I’d post here in parallel with further trial-and-error. If anyone can guide me to a robust recipe for achieving this, I would be grateful. I am also planning on modifying the source locally and rebuilding, but one step at a time.

PS: if “Dev” is the wrong topic, please guide where better to post this…

Hi !
How did you overcome the issue that
"sudo add-apt-repository ppa:terry.guo/gcc-arm-embedded
sudo apt-get update
sudo apt-get install gcc-arm-none-eabi=4.9.3.2015q3-1trusty1"
points to an invalid repo ?
Thanks

I am not sure without crawling extensively through the logs, which I can’t do today. A couple steps failed first few times, but ultimately succeeded, and I’m sorry I can’t provide detailed explanation of why they failed and why they eventually succeeded. It was my first time through, and I now have huge appreciation for the size and complexity of the build. Hoping to learn a lot more in the days ahead.

I ran the Windows utility windirstat on the Ardupilot build directory under WSL/Ubuntu/bash, just to see the types of files, sizes by file types, directories, etc… sharing this in case anyone finds it informative. 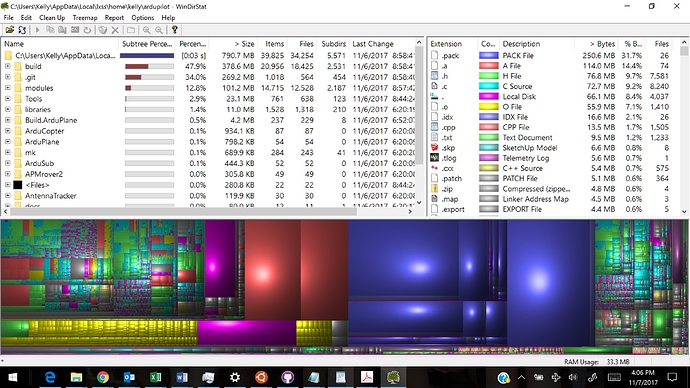 I ran into the same problems @Eosbandi. I found a website https://launchpad.net/gcc-arm-embedded/+announcement/13824
that provides an updated version of the gcc-arm-embedded but when ever I go to build px4-v2, it fails. If you find a way forward on this, please post what you did and I will do the same.

Hello, long time ago I built arduplane in windows bash, but how I can understand Your question is mostly about git system. So if You need another git repository. I assume that You already have ardupilot folder in home, so first make folder with any name:

now you can follow default steps to configure this repo (I assume that you already have everything else for build, so probably only this 2 commands will be needed)

so now we have another repo with master branch, lets get all other branches

and change branch to RevoMini

I wouldn’t call myself git specialist, but when I needed something like that, with google and stackoverflow I managed to do it.
Regards, Nikita

@Nikita: thanks for your guidance. I will try those suggestions this morning, and report back here. A few questions from your post:

Any insight on the above would be appreciated.

I appear to have succeeded in building hex files for the night_ghost RevoMini branch off master. I’ve posted details and a few questions to night_ghost on his RCG thread. Need to pull away from this now and get on to other non-RC matters, but happy to post logs and describe later what it took on my Windows/WSL/Ubuntu/bash environment to achieve an apparently successful build. I say apparently until I’ve downloaded the FW to my test bench system, booted ArduPlane, interacted with Mission Planner, and eventually sent it aloft.