Hello! Quick question for anyone here: On the newest firmware, my boats are decreasing throttle during turns. Previously, I would adjust the “SPEED_TURN_GAIN” to 100 to maintain throttle throughout the turn, however, this parameter appears to no longer be part of the code.

Does anyone know how the throttle is controlled during turns or if there is a replacement parameter? I am not using vectored thrust and would like to maintain throttle during turns.

Any input is appreciated!

Hello!
Thank you for the feedback. Unfortunately, that didn’t work - I’ve been trying to track this problem down and thought that I had it narrowed down to a bad GPS - as a boat exhibiting nav issues actually did have a bad GPS and replacing it solved the problem ironically. However… the problem returns, as well as a few other issues (below). I tested (4) new boats today and interestingly enough the ones which were running an original style pixhawk had no issues, but the ones with the Pixhawk 2.1/cube had compass and slow turn issue. The hardware was otherwise the same.

I’ve attached a telemetry log of one of these boats with issues. The slow turn is less prominent due to this boat’s specific configuration - but the compass issue is definitely noticeable throughout operation - nav issues got out of hand when on the southern most portion of this test run, about 71.75% into the TLOG, at which time we can also see the airpseed/ground speed no longer match. 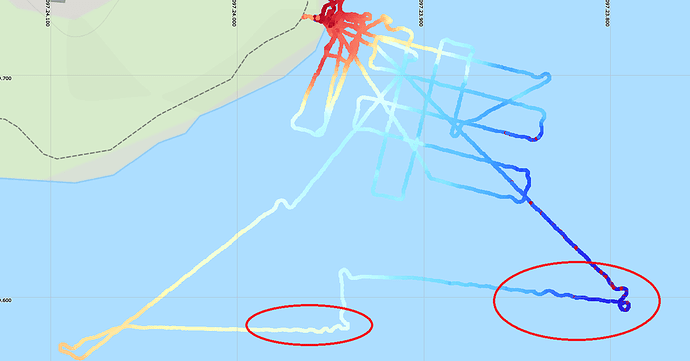 After more testing and though… these issues seem to all happen at once or not at all. And it seems to only be on the Pixhawk 2.1 units. I’m of the opinion that somehow there is an issue with the firmware and Pixhawk 2.1 or my parameters. That being said, I will try a different GPS/compass module tomorrow and try again. If that does not solve it, I’ll swap to a original style pixhawk with the same params (where possible) and GPS.

Let me know if you have any thoughts.

any chance there is a dataflash log? Tlogs don’t have as much data so it’s much more difficult to get to the root cause.

How did you create the survey mission grid with the two directions at 90 degrees to each other. I’ve done this before but created 2 separate missions to achieve it. I’ve obviously missed some feature in mission planner. 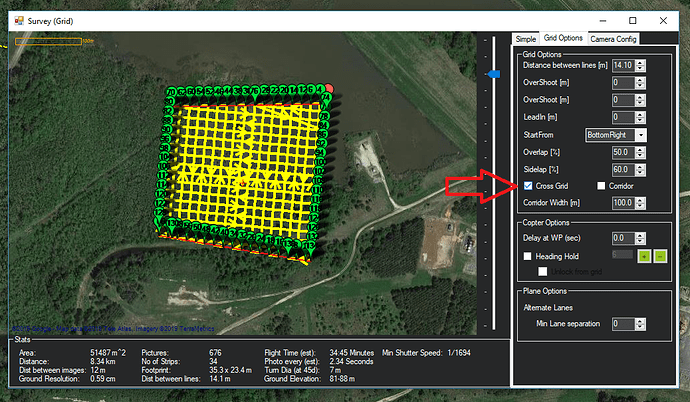 Two seperate missions works too - but in the Survey Grid tool there is an option for “Cross Grid” as shown above.

Thank you for that. I’ve never noticed that before.

Yeah… this is a strange one. It does appear to be partially environmental, I measured a strong magnetic field coming from the electrical box. I noticed this earlier and moved the compass to avoid it. However, that did not work…nor did anything else I tried, which is when I about tore my hair out… BUT now, the problem suddenly vanished and the compass is rock solid… though only after trying things which I’ve tried before. I am thinking perhaps some changes required a reboot and I just happened to luckily reboot after making the correct change? lol

I will note that currently all 3 compasses are active, with the primary compass being unit 1, set to external. No directional offsets. Does that sound correct? Previously the 3rd compass was disabled - but that’s the odd thing, since there is so much magnetic interference inside the electrical box, I would have expected disabling the internal pixhawk compasses would have been beneficial. Anyway, once it started working I knocked on wood and left it be since I had a decent amount of work to do with it. It has about 10 hours on it now with no issues at all.

I’ll download some Dataflash logs later - the pixhawk is not in a very accessible location and the companion computer is not yet setup. I’ll be soon tearing into it to find what is creating that magnetic field. I am thinking/hoping some Chinese antenna extenders for an RDF900, because that is not working well either (can hardly download params or get location updates) where normally those are reasonably solid.

Will update soon! Thanks for the help/input.