I had a crash with my quadplane.
This was on my third installation quick flight.
Arduplane version: 3.9.8-stable
I used Qstabilize and Qhover mode for quad and FBW-A for plane.
Since I was at the beginning, plane autotune was not performed yet, so default plane PIDs.
I checked everything before flight, especially control surfaces, for plane in manual with RC sticks and physically test pitch/roll with plane in FBW-A mode. Plane setup is V-tail (on CH RC.OU4 and 9).

What I have found so far, what was wrong, but probably not a direct cause for crash:
-plane motor setup is underperforming,
-plane hardly reach transition speed,
-CG was off, tail heavy aircraft,
-because of wrong CG, plane pitched-up every time transition is done (and I manually corrected to lower the pitch),
-Q_TRANSITION_MS was set to 5000, it is to long and quad props slowed down transition,
-when qplane pitched-up it loses airspeed and Qassist (17m/s) kick in (at ARSPD_FBW_MIN,16m/s)…,
-Q_M_SPOOL_TIME parameter was set to high (1,8s), so spool up time was to long, especially when QHover was triggered to save the plane,
-I noticed EKF compass errors, but only at high current (wires to long and to close to mag).

But what I can’t figure out is the following, which happened just before crash:
-What is the reason that qplane suddenly changed the direction towards the ground and keeping it at an steep angle (more than 70°)?
-Why QHover did not leveled it back to 0° angle when was triggered? 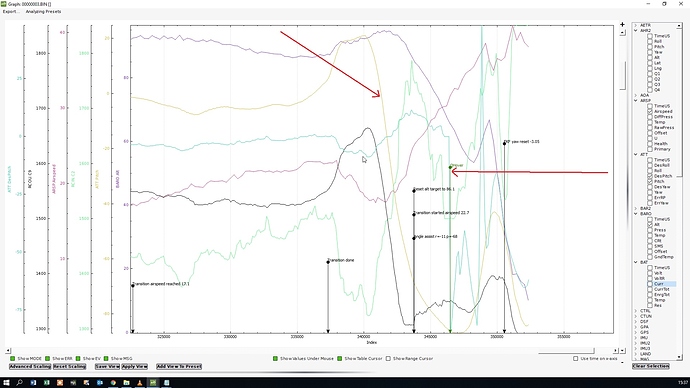 From Errors massages just before crash: Angle assist r=-11 p=-68
In docs I can’t find anything about, what does it mean?

I appreciate any help on this.

I know this is getting old, but again I must advice you to check your Plane Pitch PIDs. Overlaying your Pitch vs Desired Pitch already shows problematic trends during transition: 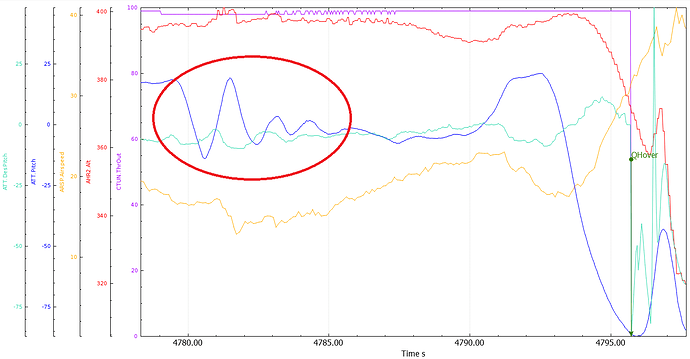 (Sidenote: I can’t seem to get messages to show when I opened your log, but this is probably a problem on my side)

The default PIDs don’t always work well for everyone. To get a good set of starting PIDs, you can refer here: http://ardupilot.org/plane/docs/configuration-files-for-common-airframes.html#mugin. For large quadplanes, the closest would be the Mugin airframe.

-Why QHover did not leveled it back to 0° angle when was triggered?

You pretty much answered it over here:

-Q_M_SPOOL_TIME parameter was set to high (1,8s), so spool up time was to long, especially when QHover was triggered to save the plane,

which basically means that the quad motors don’t have enough time to save the plane. One way to prevent this is to transit at higher altitudes to give Q_ASSIST more time should anything go wrong.

-What is the reason that qplane suddenly changed the direction towards the ground and keeping it at an steep angle (more than 70°)?

I tried looking at the log, couldn’t find any big problems apart from the PIDs and what you described so far. Sensors and power look ok, IMU vibrations are pretty low, EKF isn’t throwing out any flags, and the quad motors are responding as you described.

So it might look like a mechanical fault; the elevator servo would be the first thing I would check. Having aggressive PIDs, coupled with your constant pitching up and down (due to the tail heaviness as you described), could have put lots of strain on the servo.

You might want to refer to this link where we experienced an almost similar problem; some of the advice given there might help.