Hi, I was flying my quadcopter yesterday trying another flight controller damping. The flight did not have nothing out of common per some minutes. After this time, I elevated the quad to an altitude of 18 m, it continued flying normally, but suddenly it lost altitude and it began to fall quickly. I tried to regain control but it fall out. I don’t know what was the error. I opened the log with MP but I don’t have enough experience to determinate what was the error. Can someone help me and give me an idea of ​​what went wrong during the flight?

My quad configuration is:

We need a .bin log to see the problem.
Sounds like a motor/ESC/electrical failure of some sort though.

As Shawn says we really need a .bin log but the Tlog tells us something. You have a large Yaw bias with the CW motors running close to max. If the .bin log confirms this you will not have stability flying with this condition.
What motors, props and all-up-weight?

Thanks Shawn and Dave for answering.
I don’t have any .bin record in my MP’s folder. Is the .bin registry only in quadcopter log files?

The motors that I am using are the Multistar Elite 4006-740KV Multi-rotor and the propellers are RCTimer TM 12x5.5 "Carbon Fiber CW CCW. The weight is approximately 3 pounds.

The last few days, I raised my quad to an altitude of 4m and an ESC burned. So, as Shaw says, an ESC had a fault. It is not the first time a ESC is burned. I had a problem with vibeZ but placing the battery on the frame I had better results (values ​​less than 16).
The burned ESC was inside the frame (rear). I think it doesn’t have enough ventilation, so place the new ESC outside the frame.

I don’t fully understand Dave’s analysis, but I’d like to know what could cause this behavior.

The .bin log files will be on the SDcard or can be downloaded via Mission Planner, and it will save them in some nominated path. You can set the path in the Mission Planner settings if you dont like the default.
https://ardupilot.org/copter/docs/common-downloading-and-analyzing-data-logs-in-mission-planner.html

Usually if the ESCs are getting hot there’s some motor fault or the ESCs are faulty. This is common among the cheap copy ESCs. I find that quality/genuine ESCs rarely even get warm when everything’s working correctly. Having said that, bad PIDs can make ESCs and motors get hot.

Some sort of frame twist, or motors not mounted perfectly vertical/square/level/true (what ever you want to call it

) is the number one cause of the uncommanded yaw.
Also check there’s no Trim set in your transmitter.
If the flight controller needs to increase output of some motors and reduce others to fight the yaw (torque) that doesn’t leave much headroom for attitude control and can lead to a crash, or at least heavy landings.

I already found the log file .bin. Can you help me by confirming if the problem is the one mentioned above?

Shawn, I adjusted the PID values ​​with Autotune. I don’t know how reliable this process is, but the sudden movements of releasing the sticks I had before performing this process disappeared. The engines are level and firmly attached to the arms.

I have another question. Can a bad calibration of the ESCs influence the flight controller to increase the output for two engines?

The results shown in the Tlog are the same in the.bin log. Large yaw bias. This is somewhat similar to another case posted recently where after days of postings and attempts at help it was disclosed that the frame was bent from a crash. That would have been useful to know on day 1. I’m not suggesting it’s the case here but something is causing this bias and mechanical alignment of the motors/arms/frame are the most likely cause.

The ESC calibration would have to be way off to cause something like this I think. Why would you think the ESC cal could be bad? If you suspect those cheap ESC at all replace them with better quality ones.

If this is the frame you have there is ample opportunit for misalginment. The folding mechanism and the motor mounts on the arms. In fact this problem is seen most often on round arms. 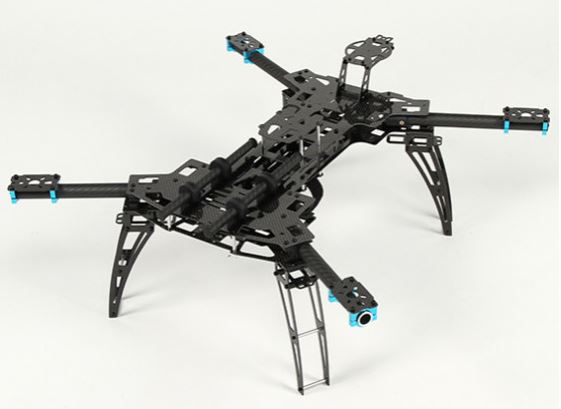 That is the frame I have. If I lift it using two of his arms I have seen that there is a buckling in the frame. Surely this is the reason you mention. Is there any kind of solution to this problem besides trying to eliminate that buckling?

I mentioned about the calibration of the ESCs because when I use the throttle stick, two of the SERVO OUTPUT in Mission Planner increase their level with respect to the others. This happens even if the quad is without propellers and on a flat surface.

That test is meaningless. Unless it’s flying the outputs shown don’t mean anything. You could run the Motor Test function in MP and see if they spin about the same (props off of course) but this will be difficult to determine and probably not worth the effort.

Well, whatever you can do to make the frame more rigid. It’s not a very good design in that regard. Maybe permanently fixing/securing the folding mechanism would help. Screws, epoxy, whatever. If it’s the frame flexing I’m not sure what you can do to fix that.

I regret not having responded.

By using a smaller capacity battery (lighter weight) and placing it on top of the frame, ESCs do not heat up at all, and the flight proceeds normally.