After several flights with my Convergence VTOL tilt motor conversion, I have verified virtually all modes and transitions and am very please with the performance.
However, there is one massive mis-behaviour that I am experiencing on every QRTL I attempt: during the descent, there will be a massive, almost 90 deg nose down glitch and recovery…

here is a typical flight log…note at 8:43 there is a massive uncommanded nose down during the QRTL land phase…

I am not good yet with log analysis, perhaps someone can diagnose the issue…
thanks

It looks like you hit a Throttle Failsafe condition which then corrected itself. I’m not sure what caused the event. Could your transmitter have been blocked or the antenna tip pointing to the VTOL? 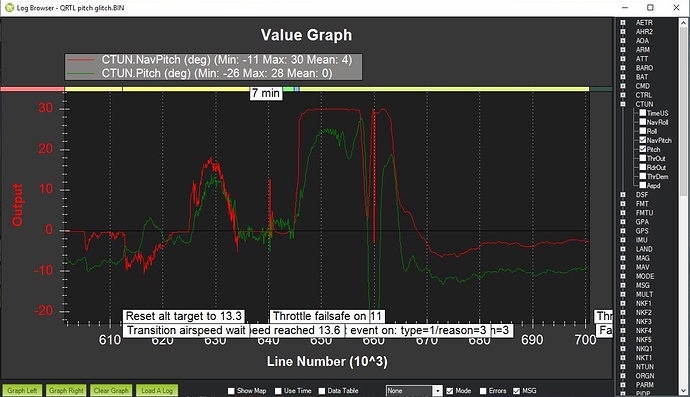 Yeah, it looks like your RSSI dropped to near zero for a period of time which caused the Throttle Failsafe event. 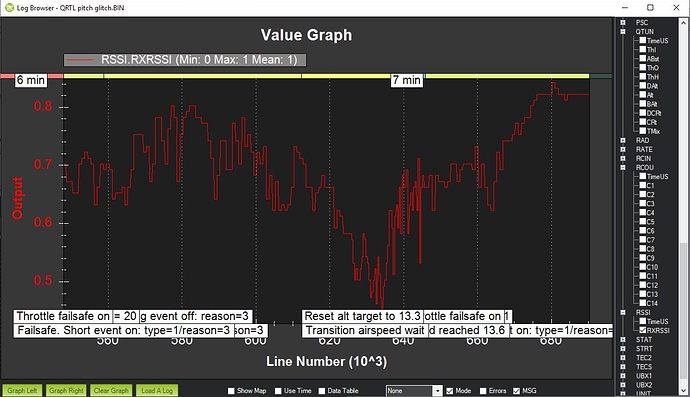 So your throttle dropped to 982 and your THR_FS_VALUE is 990. Maybe the receiver is blocked at some plane angle. 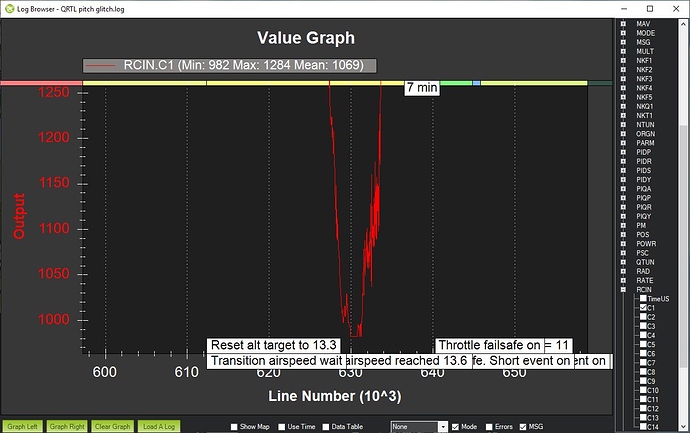 I think I started the RTL/QRTL with a forced throttle failsafe…thats the only way for me to get into RTL manually on all my planes…in any case, any RX failsafe should not impact the QRTL already in progress, since that IS the failsafe…

fyi…C1 is aileron…C3 is throttle…the issue occurs at minute 8:43:33…after I am already descending in QRTL…
thanks though…maybe you can spot what’s going at that nose down almost vertical glitch point…

Perhaps you posted the wrong log? There was no data graphing after 8 minutes.

RTL/QRTL is a flight mode so why do you need to force a throttle failsafe?

Greg…sorry,no , its the correct log…just referred to time scale incorrectly…its is absolute time when shown in MP on my computer…almost at the very end at 8:43:45 AM, after the the last transition into RTL//QRTL and its moved to home and begins descending, is when the anomalous event occurs with sudden radical pitch down to almost 90deg pointing to ground and quick recovery…I had switched into RTL(which automatically become QRTL when within RTL radius of home) by forcing throttle failsafe, goes to circle mode, then RTL, then QRTL, transitioning, then when descending over home, it pitches down hard momentarily…the tail motor (out7) is even shutoff trying to pitch it back nose up…just cant find out why it suddenly pitches down while descending

image.png1420×469 24.5 KB
as to RTL(which I have setup to transition automatically into QRTL), I always setup throttle failsafe on a switch to avoid having to ‘waste’ a flight mode position …I can flip into RTL anytime with the switch(like exceeding video range)…to exit, just release the switch and change the flight mode switch momentarily…I do this on all AP platforms…
hurzburg (Henry Wurzburg aka ATX_HELI) June 8, 2019, 1:44am #9

Andrew (@tridge) believes that it might be that I am descending tail first into the wind…with elevons slightly up( since copter mode has nose below plane mode and elevons would be up since they follow plane mode horizon always apparently in stable modes), and the wind pitches it forward…
I have done a few more tests and it does the radical nose down move when not pointing into the wind in a fast descent more than when nose into the wind…in fact, it doesnt seem to do it at all when pointing into the wind…but more tests are needed…
but why doesn’t the flight controller prevent this? it does not happen in a steady hover, only rapid descent…and why does it not do it constantly during the descent?

but why doesn’t the flight controller prevent this?

Ok, that makes sense. My assumed knowledge was that you knew not to do that already. I still remember my initial lessons years ago when going from copters to VTOLs like the FireFLY6. It was scary stuff but we learned quickly that planes were not like copters! We would always adjust our autonomous missions at the field for take-offs and landings into the wind.

The flight controller has limits on what it can correct. The worst cases are wind from the rear and descent turbulence. Those forces cannot be stopped by the flight controller. Try rapidly descending in QSTABILIZE mode sometime. Even without wind, the prop wash can cause havoc on the stability. This is true in copters as well and one reason why quads are prefered to tricopters. To fight the effect, we either descend slowly or move forward while descending. You’ll find the performance of a QuadPlane is better in tough conditions than a tilt-rotor but you still need to respect the wind direction.

I’m getting closer to giving my Convergence a try, are there any key parameter changes that you made worth noting?

Okay, guess I will check WP yaw direction options and enabling weathervaning…
my setup was close to yours…I did not remove motor connectors…left them and used them, just removed from old flight controller…GPS/compass same place, but I get some compass variance errors on QRTL due to 30A motor draws…its close enough to batt to have some impact, but functional…

I had to massively increase YAW pids…and I still have some wag…and I want to tune my copter pids…its a but bumpy in descents, even considering descent thru prop wash…will post my params for you to compare when I get back from flying today…still trying to understand what happens with FSs close in (inside RTL_RADIUS)…they dont seem to be working like I expect them (ie like copter)…I expect rise to QRTL ALT, move to home, and then QLAND…but the few I have done seem to go just into QLAND wherever FS is started inside RTL_RADIUS…

Yeah, it’s different code. Copter is more complex. A few years ago when I was doing this, we replaced QRTL with transition and land commands, which worked much better. I haven’t tried it since.

I am only concerned with FS behaviour…its not as expected…I posted a GitHub issue on it…when in a Qmode, FS should do a QRTL (rising to Q_RTL_ALT and moving to home, and then QLAND)…it always QLANDs…could be very far from home…not good…so I could be flying a mile away in FBWA, transition to QLOITER and get a FS and it would land right there…it should at least try to QRTL back…and someone had even posted that in earlier versions, it would switch into plane RTL and return (if Q_RTL_MODE is 1 and beyond RTL_RADIUS…something I would prefer myself)

Ok, I see now. I have never tested FS behavior in Qmodes. I suspect that Plane needs to catch up to Copter in this area. Thanks for the param update!