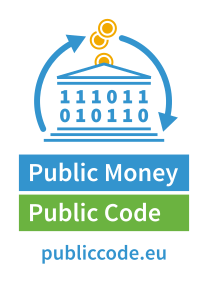 ArduPilot Foundation is glad to announce that we have join the Public Money, Public Code Initiative : https://publiccode.eu/

What is this about ? As a FOSS (Free Open Source) project, we are proud to share with our community all the tools we are using on the project, bringing better transparency and a way to reuse our works. We believe that it should be the same for publicly financed software. Software paid by the citizen should still belong to the citizen and not only to a sole entity!

Wait I am a company, how does this benefit me ?

Let’s take a real example. This is obviously simplified but based on my experience as a software engineer for drone and robotics companies in France and in Europe.

Company A is applying to some European funding to do a better delivery drone.

They spend X time doing the paperwork, Y time doing the promised tasks, and get funded by Z by Europe, with Z < Y. With some arbitrary number : 10000€ paperwork, 60000€ for tasks, 50000€ funding. So it cost them 20000€ in total, which is a nice discount, and got some Intellectual Property on the tasks done so they can monetize and advertise on their product to have some competitive advantage.

But, at the same time, at least another company, Company B, applied for funding for a better delivery drone too within 3 months.

It results in both companies burning 20000€ in non competitive advantage and losing a certain amount of time doing the paperwork for funding.

European citizens just lost 100000€ tax by funding twice the same work (or closely), and got no way to reuse those works…

With public code, what would happen is that Company A will still have the same funding and Intellectual Property, but the task’s result will be shared ! Therefore, Company B will be able to use it without needing a grant, or based it on Company A work. European citizens save some taxes and gain access to Company A results !

So it won’t be advantageous to get funding anymore ?

Not at all, the only true advantage they could get was Intellectual Property on the tasks done but if we take drone technologies, like in my example, this a very low term advantage as the whole industry is using the same technology and developing the same things in parallel. Moreover, by releasing its results as Open Source, Company A will gain all Open Source advantage. It can be hard for a private company to have a good community that brings them benefits, but if they are working with some project like ArduPilot or ROS, then it is easier to have feedback from the community and gain huge benefits! Sharing back the code on ArduPilot for example, will lower the maintenance on version update as ArduPilot will now handle it in its release and bring incremental improvement with the community, this will also allow better testing and make the code safer.