Problems with ADS-B no aircraft showing up

Ive set up the parameters for the ADS-B on my orange cube with the ADS-B carrier board have 12 sats and HDOP of 0.7 indoors,ive not set up any other parameters but no nice aircraft showing up im sad will I have to set it up properly and go outside

You can also increase ADSB_LIST_RADIUS (meters) to increase how far away it show aircraft.

I tested my ADS-B on a Cube Orange about a month ago and it worked. The way I tested it was to use https://www.flightradar24.com/ to see if any planes were in my area or not and then they really did show up on the MP map.

One unfortunate thing about the ping ADS-B sensor is that it doesn’t provide any information when there are no planes in the area. This means AP can’t really determine if the sensor is healthy or not. It would have been better if the sensor was enhanced to send some kind of heartbeat message

Also remember it’s only going to pickup 1090ES ADS-B equipped aircraft. The little Cessna 152 flying over your house may or may not have that. Most commercial aircraft have it, most low flying police / medevac helicopters have it. But the status of small private GA aircraft is less consistent, especially the older ones.

In the U.S. it’s required of all aircraft (commercial or GA) in Class A, B or C airspace. Class E above 10,000 MSL. Class G where most drones fly there is no requirement for anybody. That includes the majority of GA aircraft in the U.S., including ultralights, sport category, Type Certificated and low altitude authorized commercial (ag, emergency services, powerline patrol, etc…).

None of our 206B’s are equipped with ADS-B since they are ag helicopters and rarely fly above 400 ft AGL.

ADS-B is useless for manned aircraft avoidance for drones in the vast majority of airspace. It will never detect one of our 206B’s suddenly coming over the treeline at 110 kts. Nor will the drone have time to get out of the way if they are on a collision course. And especially if it’s flying autonomous and not under control by the pilot.

I think the biggest realistic benefit of having it on the copter is medevac and law enforcement helicopters. They will most likely have 1090ES transponders, which the PingRX receivers for ArduPilot can receive. And they are the most likely to be flying low and come upon you unexpectedly. I think they’re not likely to be 400AGL or lower unless coming into/out of a scene nearby. But I don’t want my copter anywhere near it, or to even appear to be anywhere near it. Or to be mistaken for being anywhere near it.

So I have very wide AVD_ parameters. I think I set it for either 1000ft or 2000ft. It will take evasive action in 3D regardless of what mode I am in to move away. The warning distance is even higher. I take pride in paying attention to what’s going on around me… and that my copter is also paying attention to what’s around it. At least those things around it that communicating.

I doubt we’ll ever see all aircraft in the sky equipped with ADS-B in our lifetime. So it will never be a fool proof conflict avoidance method. But I like using it for it can do.

I think the biggest realistic benefit of having it on the copter is medevac and law enforcement helicopters.

It depends on where you fly. 18% of ag aircraft operators, of which there are many more in the U.S. than there is emergency services, reported near misses with drones for the 2019 season. In 2018 Jim Perrin, one of my friends flying a Thrush 550P ferrying for refill, had a near miss with a drone while the pilot of it sat in his van while it was flying. He circled around and watched it land after almost hitting it. That one got turned into the FAA. That drone operator will never fly even a paper airplane again.

Especially in rural areas, don’t depend on it. There are 1,561 licensed ag operators in the U.S., flying 3,590 registered ag aircraft. This in comparison to only roughly 800 registered Part 135 air ambulance aircraft in the U.S, both fixed-wing and rotorcraft.

None of them are equipped with ADS-B out because they don’t need it. Rarely fly above 500 feet.

Don’t depend on your ADS-B for manned aircraft avoidance. It won’t work because the aircraft a drone operator is most likely to encounter is not ADS-B out equipped.

I disagree that ag aircraft are the ones most likely to be encountered. I agree that it’s a very likely source of conflict, but I’m not sure it’s more likely than other low flying aircraft just because of population density. There are far fewer UAS in use in those rural areas that make heavy use of ag aircraft. It’s just a function of population density. Less people, less uas, but more ag aircraft. Not that it is impossible or never happens obviously. Now go to a more densely populated area… more people, more UAS, more law enforcement aircraft, more medevac aircraft, and fewer or zero ag aircraft.

The state police and medevac helicopters fly over my area fairly frequently year round. Sometimes < 1000 AGL. There is exactly one ag helicopter that operates in my rural farmland region, and only in the fall for cover crops. He actually does have 1090ES. And it’s extremely fun to watch him work.I just don’t fly when he’s working the fields around me though.

I discussed this with Michael Oborne today and it seems that the ADSB Ping sensor is sending a heartbeat so it is possible to tell if the communication between the sensor and autopilot is working or not. This is “new” in that the heartbeat was not being sent at the time we wrote the AP driver (issue is here)

So you should be able to check communication is working by opening MP’s Mavlink Inspector and look for a “Comp 0” like shown below. 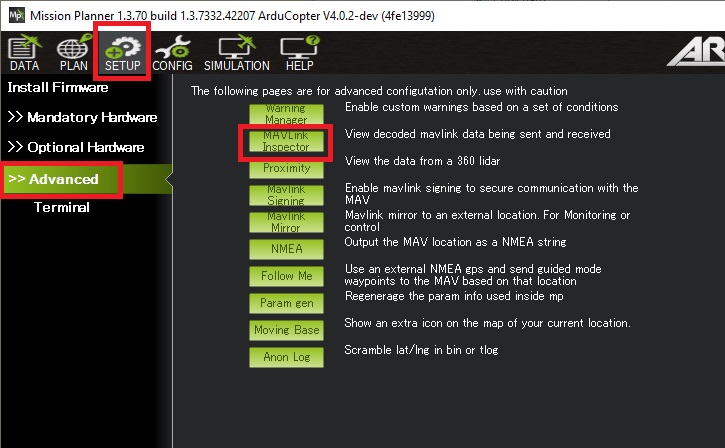 It may also be possible to check it’s working by looking in MP’s COM port drop-down for something called “ALL”. It’s quite strange that it appears as “ALL” because it means the ping sensor is using a component ID of zero which is bad but…

Thank you Randy for your help,im on the latest beta Mission planner im getting comp 1 but no comp 0 will I think do A reload of Mision Planner and redo my cube orange and report back to you.

UAVIONICS set the ping sensor’s component ID to zero??? I feel like that should create some kind of tear in subspace. But I’m glad to see it’s reporting a heartbeat now. I wonder if there’s a way to update older ping devices that don’t send a heartbeat?

I disagree that ag aircraft are the ones most likely to be encountered. I agree that it’s a very likely source of conflict, but I’m not sure it’s more likely than other low flying aircraft just because of population density.

Matt, I just want drone operators to be aware of the fact that 91.225 in the U.S. is an airspace rule, not an aircraft rule. Our airport which is Class D, populated area, has no requirement for it. Only roughly 40% of the aircraft operations conducted have ADS-B out. Making it totally useless even for air traffic control for manned aircraft at Class D airports.

Drone operators need to be aware of this. “I don’t see any airplanes with my ping receiver, and one just flew over.” Guess why? Basically, the majority of what you’re going to see with it is airliners and business aircraft that don’t fly where you fly anyway. You can live in a highly populated area and that twin-engine Piper landing at a satellite airport, coming in over your house at 200 feet AGL won’t show up on it because that airplane is not equipped with it, and not required to be.

Some really creative marketing selling this stuff to the drone pilots (mostly thought up by DJI). But creative marketing does not make it useful unless you fly your drone in airspace where it is required. And then you need a ATC clearance to be there in the first place and you’re going to have a fully certified transponder which most drone pilots can’t afford, and most drones don’t have adequate onboard power to even power one.

ADS-B is a non-starter for drones. That’s why it’s banned in the FAA’s proposal for remote ID, using a totally different technology that won’t clog up the system for which ADS-B was originally designed.

Yes I agree that the UAvionics didn’t do a good job of following the mavlink specs when they worked on the heartbeat. I’ll try and get a message to them to change the component id.

There’s a pretty clear note here in the mavlink specs that says for MAV_COMP_ID_ALL, “Note: This is not a valid source component id for a message.”. Maybe for the next batch they can get it right.

[quote=“ChrisOlson, post:13, topic:51696” I just want drone operators to be aware of the fact that 91.225 in the U.S. is an air space rule, not an air craft rule. Our airport which is Class D, populated area, has no requirement for it. Only roughly 40% of the aircraft operations conducted have ADS-B out. Making it totally useless even for air traffic control for manned aircraft at Class D airports.
[/quote]

+1 to that. I was monitoring air traffic at a class d airport near San Diego a few days ago and saw the very same thing. And this at an airport that’s within the 30nm mode c reporting veil!

+1 to that. I was monitoring air traffic at a class d airport near San Diego a few days ago and saw the very same thing. And this at an airport that’s within the 30nm mode c reporting veil!

Agricultural operators, helicopter tour operators, even news outfits that operate helicopters, have LOA to operate in the Mode C veil without ADS-B out as long as they still have an operating Mode C transponder squawking 1200. That’s why it’s not aircraft rule, it’s an airspace rule. ADS-B out is for IFR and high-altitude traffic in controlled airspace. There was a mistaken notion that all aircraft are going to equipped with it. Sorry. Not so.

Can I enable both:

in my .params, and then it will output to either one? Depending on what I have connected at the time? In other words, I don’t need to choose if I use both?

I see some people in the forum setting SRx_ADSB = “5”, others to “2.” My Orange Cube instructions tell me to set it to “2” but why the discrepency?

So far I don’t see any aircraft, but there are not many in my area for testing.

Yes. You can enable it on all of serial ports if you want. It will stream the ADS-B targets to any and all so you can see it on one or more GCS links.

There aren’t many aircraft in the sky anywhere at all these days.