I am trying to geo-ref a bunch of images using time offset and bin file.

I select the .bin and image folder, estimate the offset and then plug the estimated number (1090 in this case) into the “Seconds offset” field. Now, if press Pre-process, most of the time, it start processing the images it will start processing and then freeze at some random image number. When it does, the window is unresponsive, it cannot be moved, minimized, maximized or closed and does not seem to eat up any CPU or anything. I have to kill MP from Task Manager and start over. Very, very, occasionally, it will actually produce all the resulting files (kml, gpx and the rest) but for the most part, it just freezes.

I have not had any similar problems in the past so am wondering if something is broken in this build.

im not aware of anything.

one way to look deeper is to turn on the dos console.

then send me a screenshot when it pauses of the dos console.

Sure thing. So, in this run, I did the estimation and it was fine. I did a couple of pre-processings and they worked, then on the third, it crashed. The main window (top) is unresponsive and so are the “proper” windows but the console is refreshing and keeps coming up with the “HUD 1 hz …” messages so I had to be quick with the screenshot. 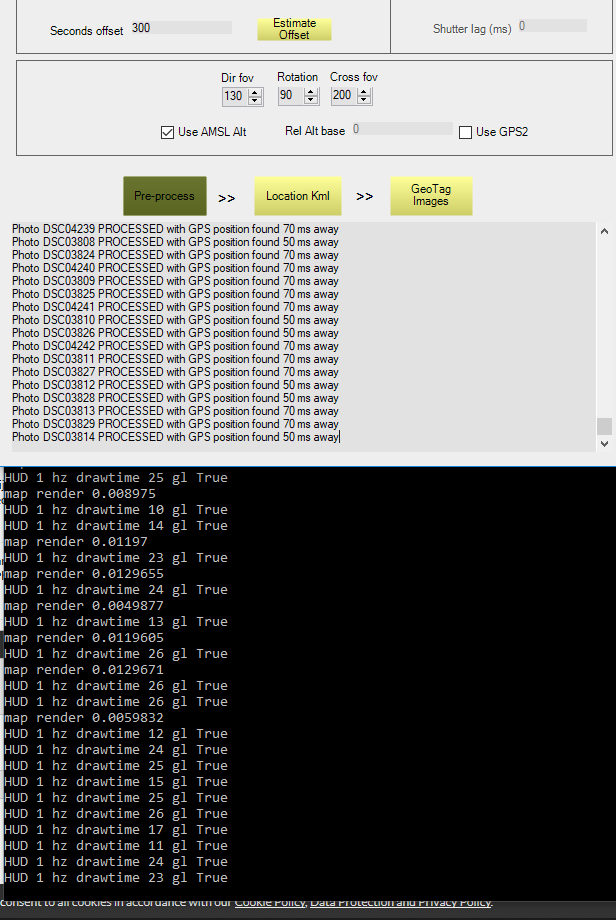 One thing to note is that, there are no messages coming on the console while the “Photo … PROCESSED …” are printing on the main window so the “map render …” was the last message before the pre-processing started.

It is not 100% reproducible. I managed to georef my images after a further 6 pre-processing runs to nail down the time. In these six runs, I got two crashes. On the 19th of June, I had done another georef run, same vehicle, same cam, same everything and had absolutely no trouble with MP (in fact I can’t recall ever having run into this problem before). I don’t remember if there has been a new version in between (I typically update whenever there is one) so it looks very weird.

As an aside (and a bit off topic), would it not be a lot simpler if we could simply manually pick one point on the track (for example, via slider which would move an icon along the track or something) and then nail one image to that spot to get the offset? This is essentially how I do it (I look for a likely image shortly after takeoff and then keep mucking about till it ends up where it should) and seems to me it could be a lot easier than the whole MP - GE dance.

FWIW, ditto on the above with Georeferencing Images. Seems hit and miss, but when it locks up, I can’t find any reason why. Same logs, same images will sometimes work, sometimes not.