together with some friends I built a Ranger 1600 with a Cube Orange. I’m not a great plane pilot so I tried to take off in FBWA, thinking that the standard params would be sufficient to perform stable flight. But sadly I couldn’t fly the plane at all, I had the feeling that it was reacting really slow. The damage wasn’t that big and if it wasn’t for the weather we would have tried a next attempt tomorrow with a experienced model pilot.

My guess from the log is that the PID-values where off, but maybe someone could look over the log and confirm this? Or correct my misinterpretation.

The default PID values should be acceptable for a small plane like that. They won’t be perfect but it should be flyable. The airspeed in this flight was very low (<10 m/s until the dive at the end), so it’s likely the plane stalled with the high angle of attack. Try to let the plane accelerate a little bit longer before you start to climb more aggressively. Also make sure that the centre of gravity is correct. If it’s too far aft that will make it more subject to pitch up and stall, especially at slow speeds.

I just looked at Desired Pitch vs actual pitch and I think that there might have been an error during setup. We checked that the control surfaces behaved correctly in Manual, but missed the point to check in stabilize. Maybe someone could take a look at this, but I suspect that the direction for the attitude controller was swapped.

There isn’t a lot of flight to really evaluate. Hard to say what the PID loop is doing when the plane is below flying speed for only a few seconds. But maybe someone else can parse that out better than I can. There’s a video here that will help you figure out what your plane is doing so you can make sure it’s right.

Thank you for your input so far. 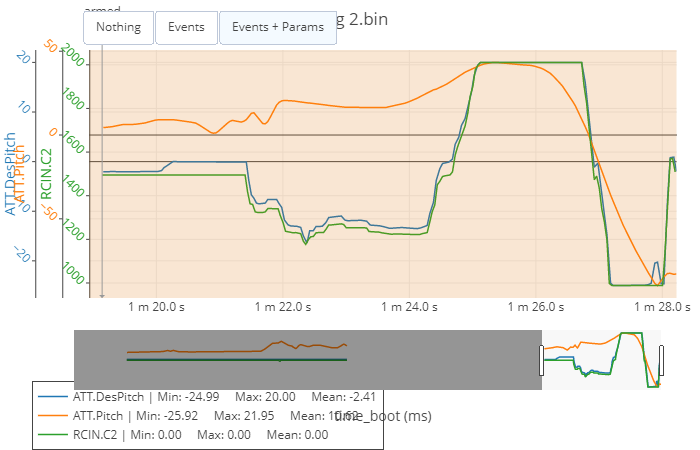 For this reason I think that the direction for the attitude controller was swapped.

Nope, I thought I had a solution but I’m second guess myself.

Just as an update: I’m now fairly certain that we made the mistake of double-reversing:
https://ardupilot.org/plane/docs/guide-four-channel-plane.html#servo-function-reversal

I can’t confirm this because we disassembled the plane to fix some parts, but if I think about it I will check it with the old setup once before we make our next attempt.