The ArduPilot dev team is proud to release version 3.8.4 of APM:Plane. This is a minor bugfix release, with just two small bugs fixed that have been frustrating users.

The first change is to fix a timing bug in the MS5525 airspeed sensor driver. That bug was causing unreliable airspeed sensing. Thanks to David Ingraham for providing logs that helped find the issue.

The second change is to fix transitions in AUTO mode in tailsitter. The transition for tailsitters was causing instability on transition from vertical takeoff to forward flight.

Hmm. I have been using MS552 for a while. I fail to understand why I never encountered this problem. I am using pixracer. Is these some special circumstance when this problem is triggered?

I flew today with 3.8.4 and this version still has the occasional big spikes in airspeed.

I was hoping this would fix the problem. I noticed spikes back in early December and it seemed related to the I2C bus length. So I keep trimming wires and eventually removed the I2C spliter (soldering the wires for the GPS and airspeed I2C buses together). That seemed to help reduce the incidence of the problem, but didn’t eliminate it.

MrO was great and sent me a replacement board. And, I was really excited to see that the firmware was updated to fix the problem.

Today I braved 40 degree (Fahrenheit) temps to fly…and those pesky spikes are still present. The attached picture shows GPS speed and airspeed with two spikes around 15:44 and a third about 30 seconds later. I also had 3 spikes on the ground gor a total of 5 in about 20 minutes. Not bad, but still not quite right.

For Sunit_Pal, I can say that the occasional single spike with a bad value is probably not enough to notice as a problem. I wouldn’t be looking for these except that I used to have many of them before I shrank the I2C bus down to about 200mm in total.

Today i tested the 3.8.4 (at 35 degrees Fahrenheit ). At over 45 cm long but shielded I2C cable no spikes. Incidentally, I had no spike problems with former firmware versions if using shielded I2C line.

do you use an I2C splitter?

If so, do you shield the cable between the pixhawk and the splitter too?

Do you shield the splitter itself? 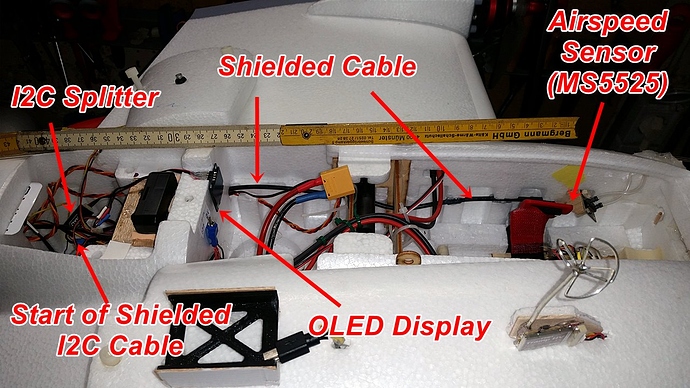 How do you shield cable ? With copper or aluminium ?

I used an old A/V Cable with both (thin copper-wire and aluminium foil) as shield.

The 3.8.4 release did not try to filter out spikes due to bad cabling, it fixed a timing bug that could lead to bad airspeed under some circumstances that could lead to the sensor being really terrible even with good cables
I will probably separately add spike filtering in a future release