Trying to upload Rover v 3.4.2 firmware to Pixhawk4 FMUv5 getting error as in picture attached.

What should be done to load firmware?
Using MissionPlanner 1.3.58 on WIn10
Windows got USB not recognized device message …

3.4.2 won’t work on the Pixhawk FMUv5 I think. Support for these boards (like the Pixhawk v5) are newer than that. Until then you can probably load the “latest” firmware by pressing Ctrl-Q on the Install Firmware screen.

I’m pretty sure that this is mostly a mission planner issue so perhaps raise an issue in the MP issues list.

Thank you! Have tried “Beta firmware” and load custom firmware - still got errors. Will write to MP group

I think “latest” has the best chance of working so maybe try pushing Ctrl-Q while on the Install Firmware screen. “beta” is really the same as “official” at this point.

Just bought a Pixhawk4 and have the same problem.

So it looks like we need to start the beta for Rover 3.5 so we can get a version of the firmware out that runs on the Pixhawk4 (MP discussion).

We’re getting close - sailboat support is partially in master…

All seems to be working, except that it won’t arm the servos

Randy,
Yes, that is the parameter I have.
Does my wiring look correct?
I simply copied the setup I have had on my previous Pixhawks. 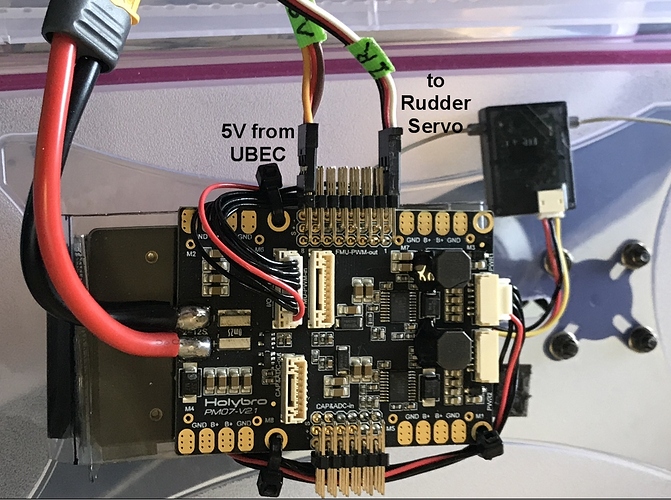 Oh, so you just copied all parameters over from the older board to the new one? I actually don’t think that’s a good idea because there are some parameters that should not be set by users (BRD_TYPE for example). I think it might be good to reset the parameters back to their defaults and then set the SERVOx_FUNCTION values and then use the motors test to see if the servos/motors move correctly.

Randy,
What I mean is I have a printed list of just the parameters we have been changing thus far, 90% of the default rover parameters are still there