Well, one might expect a product with a number that is greater than a previous product (so pixhawk 2.1 compared to pixhawk 4)should be an improvement or like a “next generation”

Very surprised to find the Pixhawk 4 today in the mail (I ordered 2 of them) and at first look, not very impressed:

Will try to get the GPS modules shipped, but I have serious doubts on the useage of the Pixhawk 4. Gonna stick to the Pixhawk 2.1 for a while.

thanks for the heads up!

@Verloop, I think there are a couple of parts at play here.

Manufacturer: Pixhawk is a trademark and it seems every version of “Pixhawk” are made by different companies. That said you should expect different levels of support depending on the company that is manufacturing whatever version is being sold. It might be advisable to consider the manufacturer when choosing a flight controller, no matter the marketing number.

Maturity: The Pixhawk 2.1 is quite mature and well documented and supported. Any newer board is considerablely less tested and mature. This does not make it inherently bad but know the risks.

Specifications of the Power management board? 120A. Connector soldered on the wires? XT-60. seems like a joke…

Actually the XT-60 connectors can probably handle more continuous current than the board itself. Running 120 amps thru 10AWG wiring is not realistic. Look at the size of the battery cables on your car to handle a starter motor that draws 100-200 amps. Does anybody actually think you can put one of those power modules inline to the starter in your car and start your car with it?

The 120A “rating” on the power module is what is the joke. It might handle that for a couple seconds before it overheats and permanently damages the tiny shunt on it. But those couple seconds are not going to hurt XT60 connectors.

Unfortunately other unscrupulous manufacturers and organizations use version numbering in the product name as a marketing tactic intentionally misleading consumers to inferior products. They know people will naturally assume version 4 is leaps and bounds better than version 2.1. And most consumers know very little about the hardware they’re buying to even know better if they read beyond the name.

I noticed that ProfiCNC / Hex has wisely stopped using numbers in their products. It has a name, like the Cube Black, Cube Orange, etc. So “those other guys” can’t create a Cube v5 tomorrow and pretend it is better.

Actually, Lorenz Meier of PX4 owns the Pixhawk trademark. The trademark was previously used by the makers of the Cube, which is based on the fmuv3 PX4 design spec, but they don’t own that trademark.

Chris, You quoted me and responded to something else.

Sorry. There seems to be confusion as to what “Pixhawk” is. Pixhawk is PX4. ArduPilot just runs on the PX4 hardware, which has historically been based on PX4 reference designs. But it doesn’t have to be. ArduPilot can run on darn near anything. ArduPilot is not officially related to Pixhawk in any way, shape or form. It is just one trademarked family of controllers that it CAN run on.

If I would voulonter to do a ardo default HW, is that something that would be of interest or not.

I would like to see HW not locked in and some HW we could focus on.
Kicad.
Stm32h743 possibly.
I need a starting point schematic.
Then could be ping ponged a but for review.

Anybody can do a custom board and run ArduPilot on it. If you need starting schematics go to PX4io and use the PX4 reference design (have to give them credit for using it and adhere to the license for it). Or design your own from scratch.

If you want to sell it, it’s up to you to market it. ArduPilot is not in the hardware business.

And it also says version 3 last open version.
Version 6 to return to open.
Unclear time table.
I think I will give it a try to do a Stm32h7 version myself.

Yes, I think you got the point. Hextronics is doing a far better job.

But I’m glad to see I’m not the only one getting confused. Seems there are more people out there thinking a higher number is a “next generation”.

Someone also mentioned Hextronics is not using numbers but “The Cube”. Actually they also use numbers. Its now 2.1.

Yes, a lot of confusion. In my understanding, Pixhawk = Pixhawk. As I mentioned in my other reply, I think many people think the same.

I think those pixhawk manufacturers use this logic to try to market their products.

As far as pixhawk 4 is concerned, my disappointment was the incomplete shipping, (GPS missing), the size of the power module, etc.

But I can see clearly now there is more going on.

Makes it quite hard to make the right choice.

Yes, a lot of confusion. In my understanding, Pixhawk = Pixhawk. As I mentioned in my other reply, I think many people think the same.

I think a lot of the confusion stems from the fact that the Cube makers originally used the Pixhawk trademark, so it was associated with Pixhawk and called Pixhawk 2.1. But they are trying to get away from that and rebranded it “The Cube”.

There is, however, significant differences in the hardware in the Pixhawk 4. It has a more powerful processor with double the RAM of the fmuv3. It has dual IMU’s instead of 3, single baro and compass instead two, etc… The fmuv3 design went overboard with multiple sensors that really do no good because the internal compasses can’t be used anyway in most cases. It’s hard enough to get two IMU’s to agree, much less three. Baro failure or drift problems can failover to GPS, etc… So fmuv5 went away from that.

I just wanted to make some points for anyone else reading this thread. But first I want to say that I have absolutely no experience with the Pixhawk 4 and I’m currently using a Cube which is working perfectly.

That being said, I am actively researching and collecting data on ALL flight controllers that can run Ardupilot.

Why do I find the Pixhawk 4 interesting?

The missing GPS units sound like a vendor issue completely unrelated to the actual performance of the Pixhawk 4 itself. @Verloop please let us know if you go ahead and actually test this flight controller. Also, please confirm if the flight controller itself has no servo connections.

Just to eliminate any confusion others coming to this thread might have, here’s the Pixhawk 4: 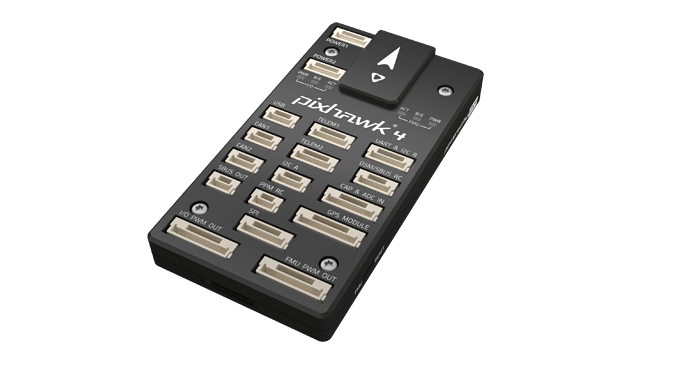 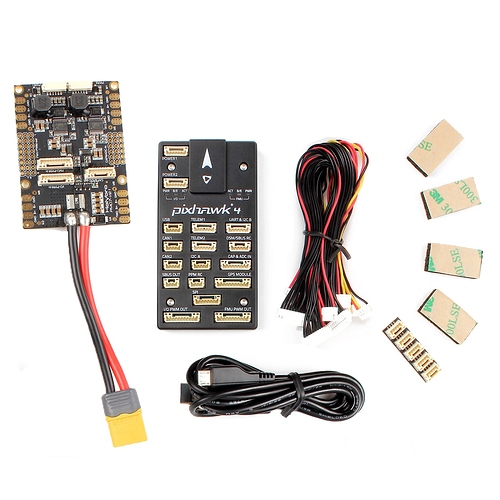 Pixhawk4-03.jpg1500×1500 287 KB
In this photo you can see the power management board, which looks to me like it also handles power distribution and all of the servo connections. 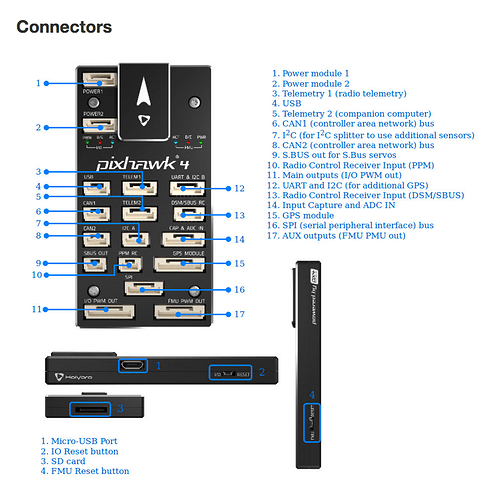 First of all, yes, the missing GPS is vendor related. Actually, they responded to our email about the missing item and it now turns out is is NOT standard included, although the picture on the website during ordering shows what will be included in the package. So today I will order 2 GPS units.

Personally I think that is an advantage. I think many times people want to power all servos from the servo rail on the Pixhawk. It simply cannot handle the currents drawn for larger servos on bigger airplanes.

The servo connectors are on the Power Module board and they also include 2 smaller extension boards, so you can chose your option.

But another problem is that I cannot find any information on the pinout of the connectors on the flight controller. How to determine rx and tx on the telemetry connectors for example.

I Googled all over the place, nothing…

I will go ahead and test, but currently not as a priority. I need to make up my mind whether to make the transition from Cube to Pix4.

Wow, great. Where did you find that? 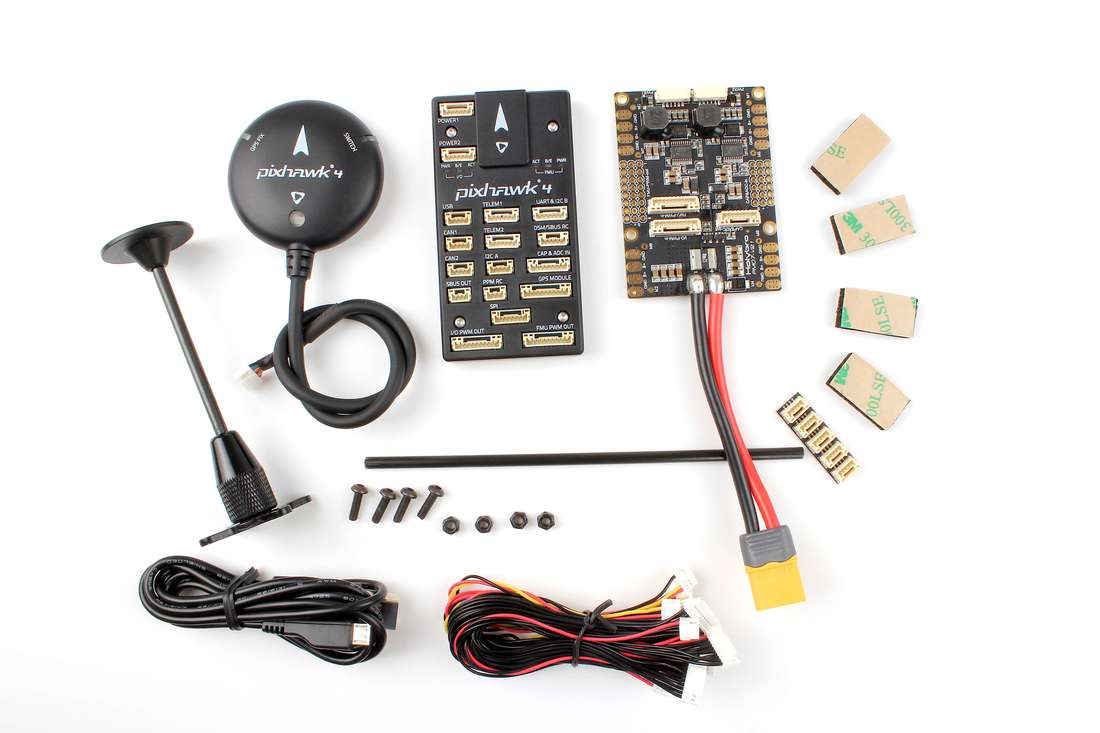 Pixhawk ® 4 is the latest update to the successful family of Pixhawk flight controllers. It is designed and developed in collaboration with Holybro and the PX4 team, optimized to run the full...

Someone please correct me if I’m wrong, but it doesn’t look like there are any servo connections/outputs on the flight controller itself, but there’s a 10 pin cable that runs to the power board and you connect your ESC/servo wires to it. If that’s true, it sounds to me like another way to save weight, and have less wiring.

You’re correct on that. But I don’t personally like that design. It’s quite messy IMO. I like the servo rail built in on the board like the Cube or CUAV V5 has. These controllers don’t power from the servo rail anyway anymore and the design of the rail is such that it will handle modern HV servos with no problems (I fly them in helicopters).

To me, that external servo rail/board is just another point of failure that does not stand up long-term, at least in helicopters. I have yet to ever have a problem with a built-in servo rail on APM’s, Pixhawk1, Cube, CUAV V3 or V5.

I have a Pixhawk Mini (now discontinued) that I briefly tested in helicopters. It has an external servo rail like the Pixhawk4. I decided that controller might be ok for multi-rotor aircraft but I didn’t like it for heli’s. The IMU damping in it is not all that good.

I also have a Pixhawk4 but I haven’t flown and tested it yet.

FYI, the Pixhawk4 can only run ChibiOS builds on ArduPilot - it is not supported by the NuttX firmware builds. The firmware for it is the generic fmuv5 build. On PX4 the Pixhawk4 runs NuttX.