Pixhawk on solo reset in midflight... or something like that?

I’m not sure what to make of these two incidents.

First Incident: I had it out hovering letting the battery run down. I wanted to test the battery failsafes. When the failsafe level was reached, it did hte usual solo response. Pixhawk switched to RTL. The companion computer immediately switched to guided mode, where it would normally execute it’s own return to home procedure. But instead, it switched to guided mode and just sat there unresponsive. I was able to change modes back to loiter. It responded to controls, except yaw. I only have pitch, roll, and throttle. Brought it home manually and landed. Here is the telemetry video and data flash log.
https://www.youtube.com/watch?v=trLv_TxC7A0&feature=youtu.be
https://drive.google.com/open?id=0BwxNJyHTG9XJSjljVWNCZjFybjg

Second incident. This one was a little more exciting… Copter is hovering at about 180ft. I pushed the RTH button on the Solo controller. This should have put the Pixhawk in RTL, then the companion computer would have immediately switched it into guided mode and brought it home. Instead, the pixhawk appears to do some kind of reset in mid air. The attitude indicator shifts to inverted, as the pixhawk is mounted upside down. Telemetry seems to stop for about 5 seconds. Some messages come though that you’ll see in the video. While this was happening, the copter lost attitude control and tumbled. When the pixhawk came back up, it immediately recovered. I’ve never seen anything like this before. Here is the telemetry video, GoPro video, and dataflash log.
https://youtu.be/2Kosb4GOMBo
https://www.youtube.com/watch?v=MdLdnYLlMw4
https://drive.google.com/open?id=0BwxNJyHTG9XJQW9BZzltTWRVNXM

The only thing I changed since last time was switching INS_TRIM_OPTION from 1 to 2 as per this thread. Prior to flight, I did a full parameter reset, recalibrated accel, level, and compass. It was some of the best flying I’d ever had on this test bird. Everything flew GREAT. Except these incidents.

It was pointed out on Facebook that the message during the reset said px4V2. It should be v3. I do not know if the message is wrong, or if MP loaded the wrong one. Also not sure if it would cause this problem. I haven’t changed firmware since the weekend when it flew fine, even in guided mode.

I think the message is wrong? Or the version on the firmware website is messed up? I redid everything. Download v3 from here (http://firmware.us.ardupilot.org/Copter/beta/PX4/). Reflashed it manually. Mavlink messages still say v2. 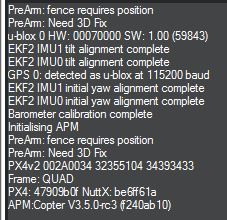 If I am not mistaken, the PX4v2 002A… message represents the serial number of the board.

Update: Video from the GoPro of the flip. Arducopter does a great job recovering from an unusual attitude.

Incredible!!!
But this was not a reboot - or?

I don’t know what to make of it. It’s like just the AHRS portion recycled itself in flight. The orientation immediately inverts, then rotates back to normal, which is what it does when booting up because the Pixhawk is mounted upside down.But the whole pixhawk didn’t reboot or shut down. The motors never stopped. In fact I think the flip was controlled since it thought it was inverted for a second.

Been troubleshooting all day. I can report the guided mode RTH failure 100% of the time. Whether it is initiated by the failsafes, the home button, or switching to RTL flight mode. Thankfully no flips. But I feel whatever is causing this problem could easily make that happen again without warning. It will do one of two things at this point:
1: Immediate switch back to fly, with no other symptoms or problems.
or
2: Stay in guided mode but do nothing. Just sits there hovering. I can switch back to any other flight mode. But the yaw stick is inoperative after this. Must land and power cycle to get it back.

I factory reset the whole thing, and reloaded everything. No change. Still does it. It worked fine last weekend. Which tells it’s a parameter I changed over the last several days that is pissing it off. There aren’t any that stick out as a viable cause. So it is probably something obscurely incompatible. I am now walking back every parameter I changed over the last few days trying to find which one it is. It’s a long an frustrating process but I’ll find it.

Thanks for all your efforts on this.

The flip doesn’t appear to be caused by a reset of the pixhawk. The logging continues undisturbed throughout the event. It looks more to me like a mechnical issue (ESCs maybe?). In particular it looks like the left motors have trouble (motors 2 and 3 - #2 is back left, #3 is forward left http://ardupilot.org/copter/docs/connect-escs-and-motors.html).

At the moment things go wrong (around line 146200) the vehicle’s rolls left but if we look at the motor outputs, the left side motors (2 and 3) go high while the right side motors go low. This is the classic sign of a mechanical failure. It’s unusual that two motors fail at the same time. That’s odd but we know there are issues with the Solo ESCs so it’s very possible.

Graph of Desired Roll to Actual Roll (desired stays flat, actual flips) meaning this is not something the controllers were happy about or initiated. 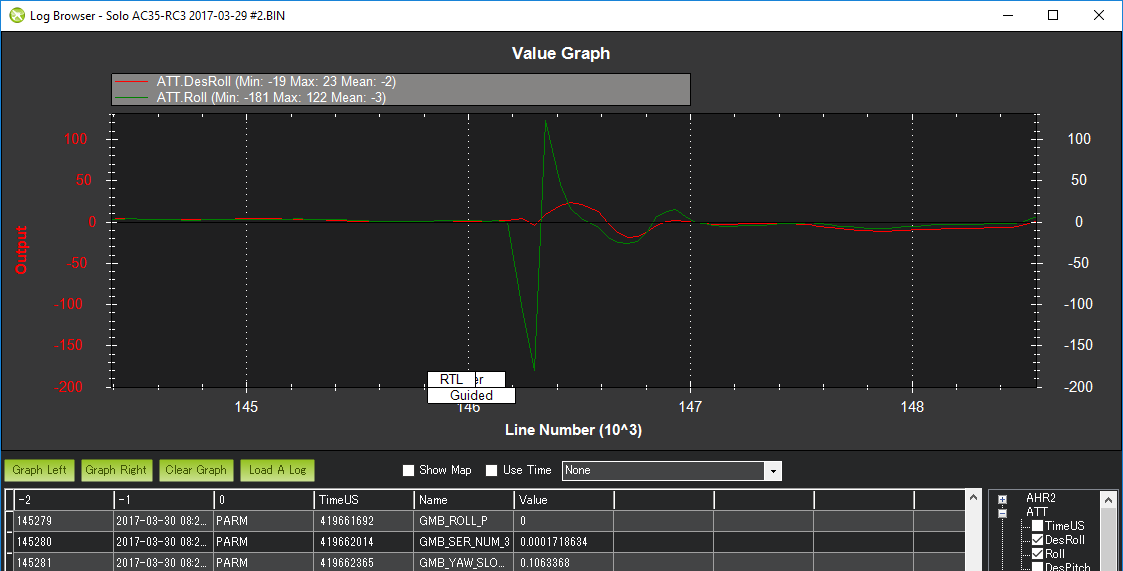 Graph of the Motor Outputs showing the left side motors (2 and 3) going high. 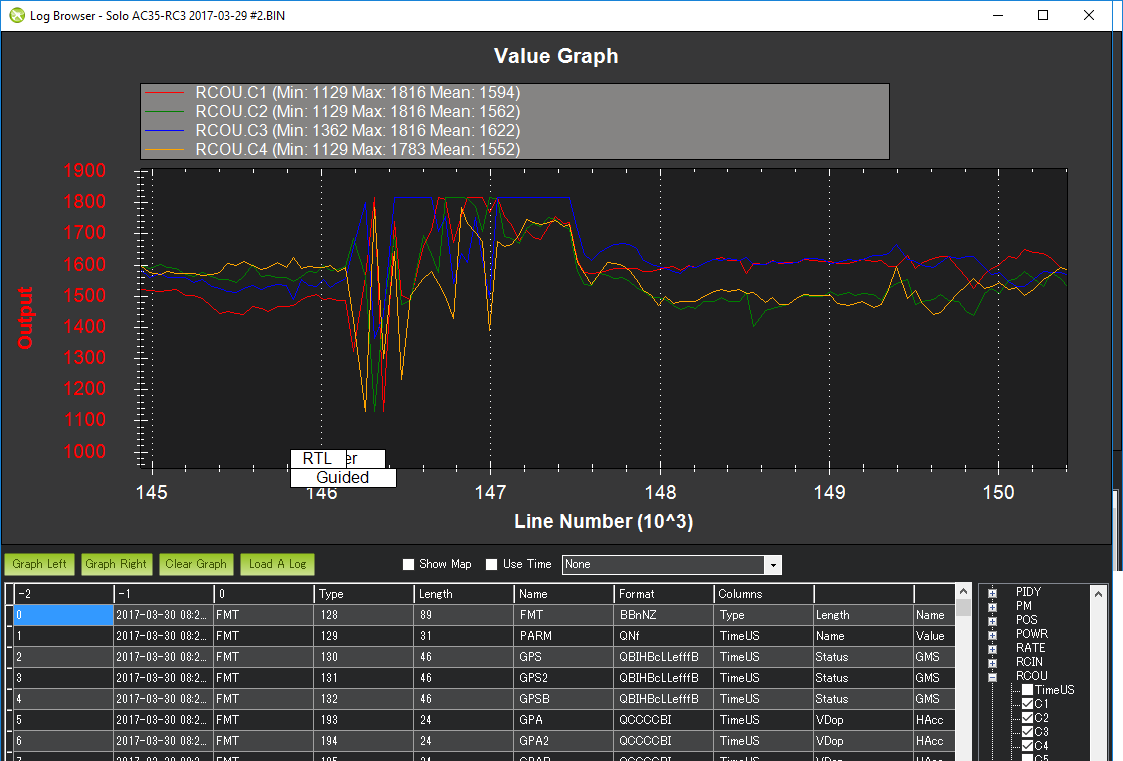 Thanks guys. So the timing of this being right as it switched to RTH is probably simply because it’s when the motors throttled up to climb. And throttling up is when the ESC flaw could rear it’s ugly head. I’m glad it was that and not something else more complex.

The guided mode RTH problem remains. But I think I’ll find the offending parameters by Sunday.

the ESC suffers from a ground lift issue on Solo if using the pixhawk that comes with it.

the ESC in high load can see a ground lift of greater than 1V.