We experienced a flip crash on our latest flight test. We would really appreciate if anyone could take a look at the dataflash log and the Youtube video and let us know what could be the reason for the crash.

We setup a simple takeoff to 20 meters and immediately LAND script using the Mission Planner and uploaded it to the drone. The drone flew quite stably for about 30 secs or so and then while Landing it suddenly flipped with its front right motor failing. 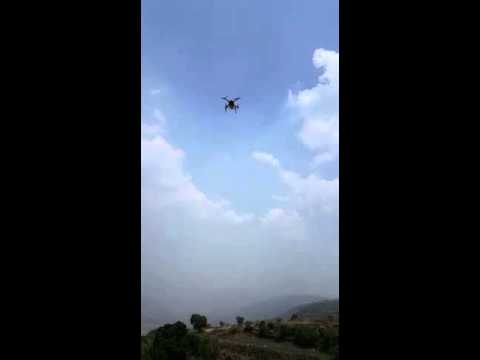 Could this be an ESC sync issue? We haven’t modified any of the firmware that came stock with the T-motor Air 40A ESCs. 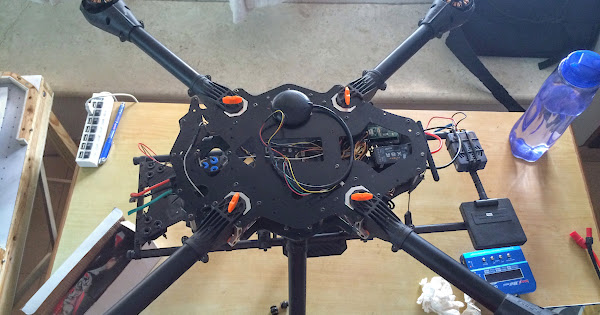 Hi,
Looked at your log and could not find anything special from sensors or power issues. But when displaying the charts about roll/desired roll and pitch/desired pitch, it seems that toward the end of the flight to show erratic divergence. That would probably point toward a mechanical failure (or ESC failure or motor failure or propeller failure). Did you check to see if all motors and ESCs were working correctly after the crash ?

Thanks for taking a look at the logs. Yeah we re-examined the drone today and found out that the front right motor is not working correctly. One of the copper windings is cut off on the inside. But our theory is that this was mostly because of the crash since the drone crashed hard on this side of motor/propeller. The motor also came out of the motor mount and this was mostly because the propeller kept spinning after crash and took the motor out by force.
Here’s the link to the pic of the motor: https://goo.gl/photos/mmxSJm4fEUbV1HnU8

But do you think there could be a possibility that the motor copper winding was screwed up during the flight itself?

I cannot find anything to blame the Pixhawk from the logs since the Pixhawk was reportedly doing the job correctly. It even increased all the current to the front right motor and reduced it from the other side at the point of crash as it should.

The logs show a normal flight except at the end where motor 1 is total to speed up and motor 2 to shutdown which matches the roll and pitch and yaw. The video shows the same but I hear at the point it’s starting to flip a binding sound which would indicate something got stuck in the motor.

Yeah I guess something was off with that motor during the flight. I am still trying hard to listen to that binding sound in the video. So difficult to catch that in the middle of all the other noises. You probably have an ear for this that I don’t. We were contemplating switching to Naza for a while but the Pixhawk really is not the issue here I believe. Could this be an ESC unsync issue? Is there a way to confirm that from the logs?

Unfortunately there is no feed back from the motors to the flight controllers. This has been an issue for a long time in that the motors are just told to spin with really no feed back as to what they are doing. PWM motors have been around for 30 years and have never changed.

Do you recommend that we replace this motor and give Pixhawk another shot? There is an expensive camera on board that we dont want to hurt. Switching to Naza would give us some reliability I believe but it would become an entirely closed system then with little room for writing obstacle avoidance software and other interfaces. Or should we test the craft with Naza first completely and then switch back to Pixhawk. One of the main features that Naza doesn’t have and the reason that we are using Pixhawk is the CAM_TRIGGER. Plus DJI has included a lot of no flying zones in their latest firmware for autonomous flight. Any recommendations?

that video clearly shows one corner dipping hard , ie the motor in that particular corner just stopped doing its job. It’s clearly a hardware problem with either the ESC, the motor, or the electrical (PWM) signal going to the motor. ( eg, if the plug to that ESC got shook loose ). any of these would give identical symptoms. however, it’s easy to test post-landing… check if ESC is 100% , and it’s one of the other two. check if the esc wiring is reliable and plugged in right, and then the only other option is the motor itself… and since that was damaged on landing, you’ve gotta replace it anyway.

Thanks for your reply. This cannot be an ESC unsync (non-compatibility) issue with Pixhawk right? Folks have documented previous unsync issues but I don’t understand it too well to explain here. Any thoughts? Or should we just replace the motor and give Pixhawk another try. The ESCs are good. Could this in remotest sense have anything to do with the fact that the Pixhawk servo rail is not powered? If its not powered, how does the 3.3V PWM signal go to the ESCs? Could this non-powering of the servo rail lead to any noise on the PWM signal sent to the ESCs?

This will tell you about pixhawk power: http://ardupilot.org/copter/docs/common-powering-the-pixhawk.html In short it says: If you have a power module, you don’t need to power the output rail.
Anyway, your problem was not related to “servo rail power” as the other 3 motors continues to attempt to control the copter on the way down… so the pixhawk and other 3 escs were all operational. That’s not the problem. If it was me, and everything else tested fine except the one motor, I’d get a replacement motor, triple check all the wiring, and try it again, but this time hover lower, and over long grass… as then your less likely to destroy stuff if something else goes wrong. best of luck.

+1 on changing out that motor, the magnets in the motor can pick up all sorts of small bits of metal from a bench and stop working. Also +1 on flying the machine manually at low level. I never add a camera to fixed wing or rotary platforms until I learn to trust them. Generally around 5 hours of flying for fixed wing, little less for rotary. Also having less stuff connected gets rid of any potential interference from them.

I got a reply from the DIYDrones post on the same issue. Its as below:

“I would check motor/ESC #1 for damage and function. From the log the autopilot throttle up motor #1 and throttled down #2, motors #3 and #4 mirrored eachother. This is consistent with motor #1 failing.
If no physical damage is seen (scorched wires, broken wires, bad smell) then what might have happened is a motor/ESC sync problem. Reducing PID values to “detune” the quadcopter can help keep the motors from losing sync in some circumstances.”

Would any of you happen to shed some more light on the motor/ESC sync problem? I have absolutely no knowledge about this issue and does this issue imply some kind of a compatibility issue of ESCs with Pixhawk or is it purely between the ESCs and motor?(since it seems to me from the log that the PWM pulses were being sent out ok from the Pixhawk). Is there a way to figure out the ESC/motor sync problem from the logs? And finally how does reducing the PIDs help is improving the sync?

I have also put together a crash report doc - https://drive.google.com/open?id=0B2IbWlGU-rXkUDRGSEpZcFd2UjA

Sync issues are caused by low RPM motors with large props that are told to change speed very rapidly. The motors are not able to keep up with the speed change and lock or stop. To help prevent this from happening the ESC’s are programmed to not allow the motors to change speeds so quickly and are smoothed out into a slow change in speed.

Thanks Mike. We were using 14 inch wooden propellers with the Kongcopter FQ700 frame. The 40 Amp NO BEC AIR ESCs and 380 kv 4006 antigravity T-motors. Could this combination result in an ESC/motor sync loss?

Yes, this is exactly the bad combination that was talked about.

Well, but looks like the T motors ESCs worked for him which is what we are using. What does he mean when he says changed the signal to 200 Hz? On the Pixhawk or on the ESCs?

The normal update rate for the PWM to each motor is set to 400hz by default. There is a parameter to set this update rate to a lower value.
http://ardupilot.org/copter/docs/parameters.html#mot-parameters
MOT_SV_SPEED: Servo speed

Again, if you have a motor sync issue you should be able to cause it by changing the motor speed very quickly such as pitching the copter forward or left to right very quickly.