So, i was giving a try to my drone, I did 2 flights after without problem. But this time was different. It was in loiter mode and no problem until suddenly seems to be all the mortors stop working, all at the same time, and as you can imagine, it crashs on the floor.

I tought may be the Pix was rebooted, or some hardware was burn out, so I went to the the logs, and as I can see, all the parameters are good, the system try to go up, but at the same time I can see the current usage stops and the voltage go up, like when you stops the engine.

The battery was OK on the flight, I had a volt tester attached the the battery to 3.6V per cell, and I never get the sound alarm.

Here is the log attached, if some one can give it a look, may be ther is something Im not seeing. After the crash I got some GPS glitch, but I think that was for the hard hit on the floor, so dont pay to much attention on that on the log.

Just from the graph you posted, you can see that the flight controller commanded full throttle when it began to fall. This strongly implicates a mechanical failure of some sort. Since all of the motors stopped at once, you will want to check the main power wiring that leads to your ESCs. Make sure no connectors are loose and all solder joints are intact, as a failure in flight may be from a connector vibrating out or wires/solder overheating.

… yes i know… I saw others parameters in the log and i can realize the controller did the best to recover the hexa. I also oppened my drone to check the connections and everything was ok. I have all the electronic is inside a 3d printed box with 2 fans, so i thnk the heas is not a problem.

The stranger part is if you see the voltage and current parameters compare to the thr and the altitude, is almost like all the electronics waa shuted off…

I started the drone today and worka just fine…

If it failed once and you haven’t found and fixed the problem, it will do it again.

…yes, but it think its going to hurt…

Now I will install the parachute…

It looks like a connector between the power module and PDB failed. It my be intermittent failure so I wouldn’t fly. I base this conclusion on the fact that at the exact some time as the current stopped the voltage went up. The 5 v power to the FC remained. Is there a connector between the power module and PDB?
On my copter I have the battery connector and leads soldered directly to the PDB. I use a circular Hall effect current sensor that the main battery cable goes through. This way there is only one connection between the battery and PDB and no inline components to fail, like an overloaded current shunt resistor. I would only trust a Hall effect current sensor for reliability. There are the pass through type or the current rated Hall sensors were the current conductor is part of the device.
Current sensor I use https://amploc.com/products/amp100-open-loop-hall-effect-sensor

I want to update this issue. I have checked all the electronics in the drone, I reinforce all the soldering, and I have use plastic silicone to isolate some contacts.

To check if a shortcut was the problem, I have made a shourcut in the powerborad to check if I get the same telemetry, but wasnt the same, the telemery has frozen in the moment I did the shortcut. As you can see in the log, in the real case, the telemetry was complete until I have disconect the battery.

Today I had again the same problem, another drone, all new, but the same data in the telemetry that the first time…
But now I have realize the problem! I was using a diode in the servo riel to give the pix a backup power souce in the servo riel, like iit say n the ARducopter documentation:

as you can see in the pictures, the riel port where the diode is burned, as the diode conector.

may be im doing it wrong? Any one has made this? 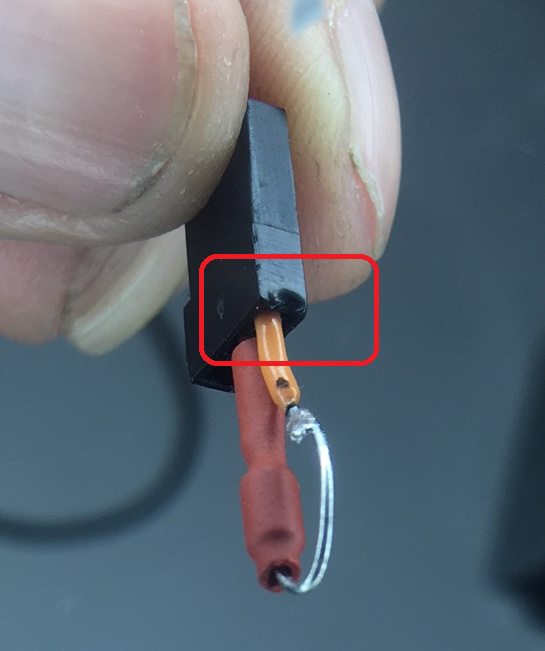 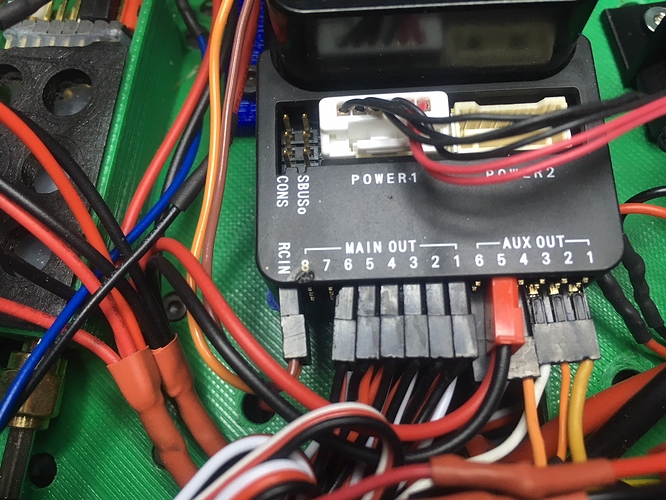 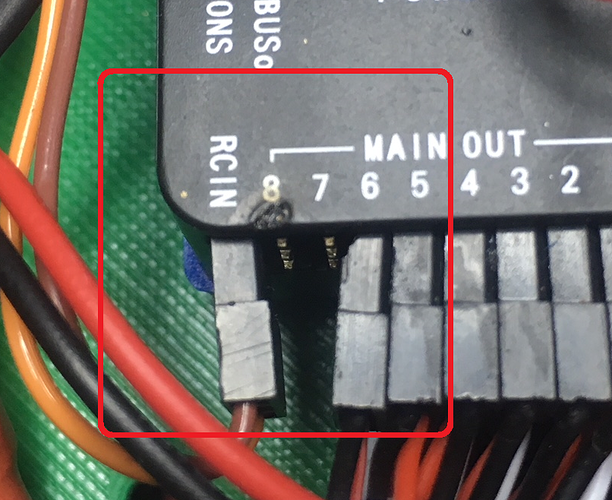 Oh My.
First : The Cube does not use alternate power from the servo rail. Using a zener there is not not necessary.
Second : It seems that all your esc’s has their power wires connected, unless they are Opto ESC’s and does not provide power to the control connector this is wrong, remove the power wires from the esc connectors

thanks! I haven´t saw that info about the servo riel for the Pix 2.1.

About the + cables from the ESC´s, I have use a extension cable from the ESC, no ESC positive cable are connected, just the extension has red cable.

I appreciate your comments!
thanks!

Ok. Just one more question, where the power to the servo rail comes from ? I see a big cable split, what type of regulator are you using to create a secondary power ?

Hi Andras, the cable came from a distribution board, with 5 and 12V output, so Im taking the 5 volt output to power up the servo riel.

OK, so it is an integrated BEC+power distro board.
It is clear that the zener was shorted and caused the problems, the only question remained that what caused the short. I would suspect the secondary power board. What type is it ? Do you have a picture of it ? Was it the same in booth copters ?

I think may be the diode is not what I have order (arducopter specs), and the diode was the one made the short because the heat. I dont have a second power board, this is a picture of the whole system. 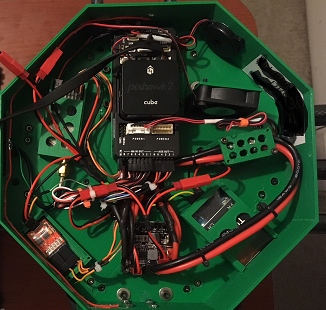