Hi,
just got something new with my large quad. A midair reboot… Not that funny as i sounds. I think i lost some years of life expectancy watching this.

This is what happened: Connected battery, started up. Got Ground Station to work and wanted to take of. 2 meters from the ground the copter stopped all props and i heard the “startup sound”.
Dropped dead to the concrete and killed, once again, the landing gear.
I can’t see anything in the logs except they just stopped i meter above takeoff point. Maybe someone can point me in the right direction.

A few words to the setup:
Tarot X4 with 40A esc running Multistar Elite 5008 320KV with 18’’ props.
Pixhawk is powered with a bec through servo rail with zener diode and capacitor.

Power issue was my first clue but it looks not that way.
Hope anyone got a clue.
This is the same quad with the strange altitude bumps i wrote about here.

I have to say that this quad took several flights without any problem. Neither the altitude problems nor the midair reboot.

Happened to me also with plane firmware a couple of times. Interestingly most of the time during first 5min setup time. 2 times already this happened short before throwing my FPV wing. I do power my Pixhawk 1 clone with power module and zener diode + capacitor on the servo rail. No idea yet what caused these reboots… Thought it was a quality issue with the clone board… Not sure.

post dataflash log - that’s the only thing that can provide an answer.
Also. Pixhawk has 3-way power redundancy , as you learned now, you should have used it.

Ups, thought i had uploaded the log. my bad.
Well, i just rule out a power outage. From the input side there was power all the way. If you think of a power outage it has to be inside the pixhawk because the way to the pixhawk works. I just can pull two more lines to the power port, wouldn’t change a bit in my experience, been there done that

and by the way… if it is something this “easy” like a simple power problem i wouldn’t have to ask for help here.

I have had similar issues with a Pixhawk in the past giving me strange stoppages.

You definitely had a brownout or FC crash in flight as the log just stops.
Vcc looks good as does the ServoV so a brownout is unlikely.
The AHRSalt and POSalt are very strange rising to 500 just after powerup, whereas the baro and POSrelHomeAlt look reasonable. I assume you are some 500m(ft?) above sea level for this to be so.

I tracked mine down to an external mag that had the I2C data lines crossed going through an intermittent connection on an I2C expander.
It took stripping the copter and rebuilding it to find these.

So despite what may be inferred, the FC can crash the flight stack.
Finding what causes it is the trick.

Just an observation but your Z vibes are borderline. 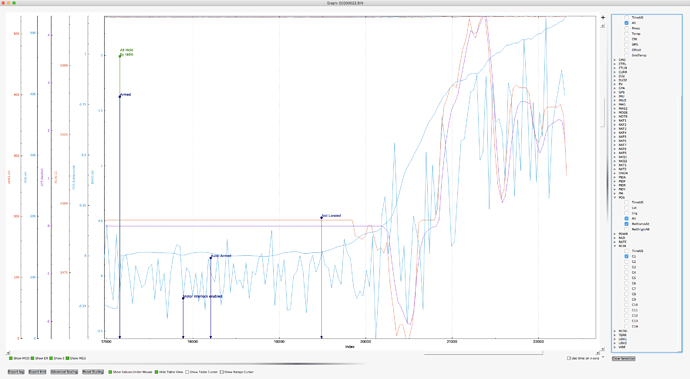 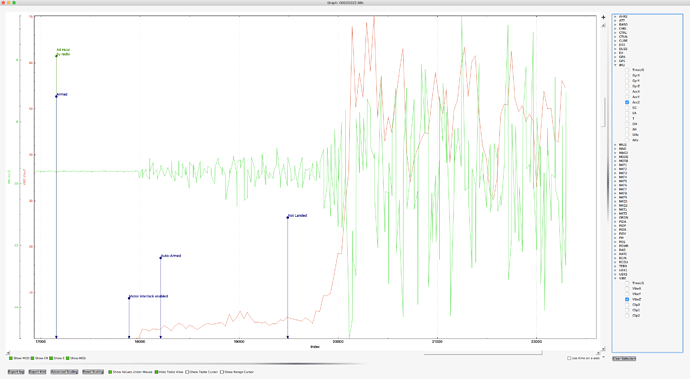 Hmm shit, just checked the I2C lines. They look in order. Would have been to easy i guess.

Z Vibes ist really a problem. It is frame related and i’m still trying things out to get them down to a “normal” level. Problem is, that the arm connection is not really rigid

Well, as far as UBEC’s go, I have a 3amp 5v one from Amazon. Upon testing, it can only output .25 to .5amp. It wouldn’t even charge a cell phone. I suspect a great deal of people are using UBEC’s that aren’t supplying the rated current.