I’ve noticed an issue with oscillations while breaking during my last test flight.

The craft flies well in Alt.hold and is really stable in about 2-3 m/s wind. It also hovers quite well in the 6 m/s wind. My issue it that when I break in a headwind, the craft experiences some small oscillations during the breaking maneuver (Loiter)

This would be similar to breaking from a higher speed/higher airspeed from the vehicles perspective.

I’ve experienced this type of issues before. Those times I have lowered the PID values a bit and the oscillations in loiter has than gotten smaller or disappeared. Those times, just like now. The aircraft has been flying great on Alt.hold with it’s higher PIDs.

My question is if I’m actually doing the right thing when I lower the PID tune. Or if there is one specific value I should try first, or maybe it’s something that has nothing to do with the PID settings? Maybe someone else has seen this issue before?

I guess you are talking about here where you went from full stick pitch to neutral and the craft overcompensates ~12° or so?

Yeah, I flew full stick into the wind, and when it’s breaking (loiter) it oscillates. No big swings, just some very small rapid once.

Should I change some specific PID value to fix this?

Or is it just testing one at a time?

Hmm, that graph wasn’t showing rapid oscillation just a fairly typical braking correction so not sure I see what you are describing. I would have said these look low and you need more aggressive action:
ATC_ANG_PIT_P,5.5
ATC_ANG_RLL_P,5.5

If you Auto Tuned these would likely increase significantly. Not saying you should just the point that with a well tuned craft the Angle Controller P gain can be higher.

I don’t find any oscillations in the log either, which surprised me since it was very obvious visually. Although I’ll start with the angle P up and see if there is any difference. I still have high vibration which probably messes with things a lot.

I’ll try some settings and see if I get the issue sovled. This airframe setup is not the best structurally either. My new landing legs (4 tubes, one at each arm pointing down) vibrates with the aircraft sometimes as well. So I’ll have to look into designing new once for this frame too. So to get a perfect aircraft out of this setup will most likely be hard or impossible.

Never the less, thanks for the help, I’ll try to higher the angel P and see what happens!

I test flew the aircraft today and did some tuning, including increasing the angle P on pitch and roll.

The small oscillation is gone when breaking into the wind and I changed my altitude source to GPS instead of barometer due to some aerodynamic effects on my frame which caused the aircraft to ascend when flown into the wind. 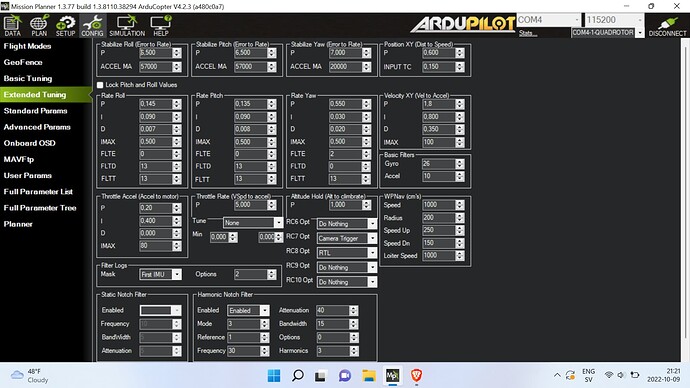 Maybe you could take a quick look at my results and the PID values, if you got the time ! I don’t have much reference to what a normal PID setup looks like. The I sems low here, since autotune sets it to the same as P and D might look a bit low. The copter works great on these, so I’m afraid that if a weird PID setup works, something else is wrong.

Tune looks pretty good. You can usually set Rate I=P . When I said increase Angle Pitch and Roll P I meant ~double it. But I suppose it depends on how responsive you want or need this craft to be as it’s no racer.

In any case these look good as is:

Having clean Rate response like this is nice to see.

When I increased the angel P more, I got rapid oscillations when a small stick input is made. The oscillations only lasted for a second or two after I centered the stick. Also lowering the D gain and the I gain made this problem better.

Noise is not bad at all. <.1 is the goal and sometimes can be hard to achieve. Could take another look at the Notch filter I suppose.

When I increased the angel P more, I got rapid oscillations

You could set Rate I=P and try that again. If there is still oscillation then both can be lowered a bit. It’s often a give and take on these parameters and can be time consuming as they effect each other.

Or, fly it as is and have fun

I have high vibrations, and my frame isn’t the stiffest. So that might contribute to some imperfections. Although I haven’t seen this rapid oscillation issue before, neither have I had to set the I that low, also the angle P has always been higher as you suggested (from autotune). This is the first real attempt at tuning I’ve made. So I’m not that good at it yet.

I could look into the notch filter and see if some fine tuning of it might help.