First post. hope i am doing it in the right place.

I am running Arduplane 4.0.3 in omnibus pro v2, flying wing s800.
The wing i used to fly without any FC. And it flew pretty good. Always stable and easy to fly with 50% expos. (no dual rates needed).
Decided to give it a try with Aurduplane. (so i got a cheap omnibus, i think from BG).
(uploading the arduplane software and setting things up was pretty easy, i was even surprised…)
everything seems to be working alright. Elevons working properly both in manual and fbwa. GPS also showing the location and +9 sats most of the times.

first thing i noticed was, the plane is practically unfliable in manual. way toooooooooo touchy.
so added expos… up to 100% and cliped the pwm at the TX. (i did not recalibrate), trying to have less throus on the surfaces. still… it’s too touchy…
second thing i noticed is autotune does not save the pids values. no matter how long i run it…
third thing, (after manually finding some pids, probably not the best), i cant make tight turns…
i’ve changed the bank angle to 60 and navL1_period to 13…
still, the turns are too wide. (first thing i thought was the trough limits… are limiting. but thinking again about it, i believe the trough only limit the speed you get to the desired position)

i’ve been around the parameters and documents… and i cant seem to find a good explanaition for all this except, either i am doing something wrong (most likely) or the board (fc) is just not capable of working with the arduplane. which in turn doesnt seem correct because i see on YT others using this same board and same software and… it works. actually they even claim it works pretty good and easy to tune and all.

can some one point me what i may be doing wrong?
I have logo files…

Thanks in advance,
Rui

When asking for any help it is necessary to upload a .bin file from the flight controller (FC) so people can see what is really happening.

Too touchy in manual usually means you have made the plane tail heavy.
Did you recheck the CofG after you installed the FC.
If the plane is difficult to fly in manual the poor FC is probably having a hard time as well.

Post your .bin file of the last flight for further analysis.

i used to fly this plane alot. and it was really docil. and i marked the cog. i have the same cog, and i checked, because the first time i flew it i felt it taill heavy indeed. but not today… i am sure that is not the case. wonder if vibration could be the cause (but i think one should have problems in auto not in manual), another possibility could be not enough power to the servos… and getting them lock in extreme positions…(but wouldnt i have it too when auto and changing attitude really fast??).
trying to upload the bin files…


this flight, at the end you can see i was fighting in manual… till i crashed it…


this log has a long autotune time. i believe it does not save the pids…

sorry, seems that the files were too long to upload here.

thanks for you help Mboland!!! 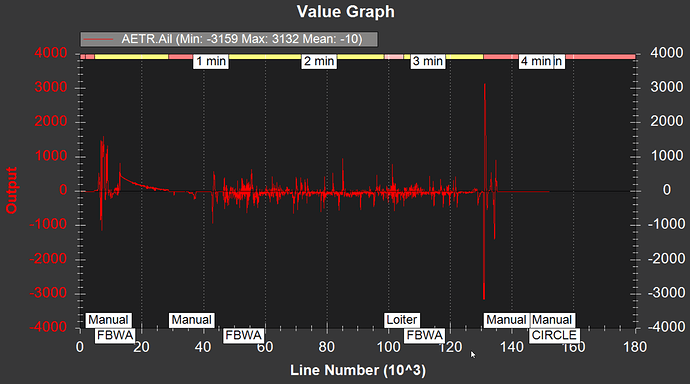 Just a couple of points I noticed looking at ‘voo_c_acc_danificado.bin’

But in Manual mode this should not affect the planes flight as the FC is not performing any intervention.
This is curious as looking at your RCout it is all over the place, and here you can see the occasional corrections you make to keep it going.

It looks more like some electrical or mechanical problem other than the FC.
You can see when you switch into FBWA that the RCout goes steady but it would obviously not be in the correct direction due to the VIBES messing up the FC.

Thanks MBoland,
I will start by isolating the FC board.
Redo the testing and post the results.
Rui

You may also want to balance the prop/motor.

thanks!!
i will do my best to have the board not seeing vibrations.
Rui

I managed to decrease the amount of vibrations. Not sure if the level is now acceptable…

i’ve noticed that circle works pretty much alright.
even having my max bank angle set to 70%, i do not see the plane rolling more than… 25/30 degrees.
rolling is also assymetrical… (looks like)

in attachment you can have todays logs and the parameter file.

thanks in advance for you help,
Rui

Hi Rui,
I’m on a similar path to you, researching arduplane for my first ardupilot build & I will be using an Omnibus Pro clone too.
So this comes from someone with the least amount of experience you could find …

Firstly at least with the Omnibus clones (not sure about the original) the main controller is extremely sensitive to voltage levels, so it is wise to power servos from an external source (BEC / PDB) rather than from the board itself - in case a high servo load causes the processor to brownout. Not sure if this is contributing to your issues.
Also elsewhere on this site ( AutoTune woes. what am i missing?) there has been discussion that autotune on ardupilot was not saving parameters in versions 4.0.0 and 4.0.1 but should have been OK by 4.0.2 … so not sure if they didn’t hit target or if something has reverted with 4.0.3.
In any case it may be worth trying to save settings as Dave Glover said in above link by,

Thanks Lex!
I bought a Pixhawk from BG. Hope it solves same of my problems.
Just dont know if it fits my S800 bay…
(I was not using an external BEC, that might have been one issue)
As soon as i have my new board I will try it and post results.
Cheers!!
Rui

Just a couple of notes…

how are your servos powered ? I have no problem powering the servos from the board. However, I have just fried two Omnibus F4 Pro v3 and two expensive receivers, consecutively, when the ESC BEC power lead is connected to the board while using 4s battery. No mods done on this particular board.

For my 6 other boards that are working, I have done this diode triplet ESC_5V Isolation mod on some of the boards, but haven’t really noticed much difference. I can remove the diode and the mid-ESC rail is still being powered by simply plugging in USB.
https://www.rcgroups.com/forums/show…C_5V-Isolation

my servos were powered directly from the board. and i did not do anything about the zener diode…

all my servos are powered on that rail from the ESC’s BEC…I always remove the diode first thing…just clipping it off with a pair of small cross cutters does NOT guarantee its really removed, you may have just popped the case off and the substrate is still attached…if you get anything on an ohmeter other than Megohms when between the servo power rail and any 5v pinout on the rest of the board, you havent removed the diode yet…

thanks for your tips.
but i did not power the rail with a ESC BEC. all the read wires were removed from the plugs.
but this weekend i will try to 1) remove the diode 2) power the rail from external BEC.
(all this while i wait for my pixhawk).
Of course i would much rather have the OmniBus working ($$)…

finally got my pixhawk… (took some time…)
Seems to be working ok. (flying wing s800)

Started with Bad Gyro Health…, after a few Firmware flashes back and forth on the versions… now seems the error is gone. Weird because the ax,ay and az seemed stable and correct. Horizon was not moving on his own or anythng alike.
So far i am only on the bench and noted that manual mode doesnt seem to be using the full window of output values on for the servos. (even though you can see 1000, 1500, 2000 in the min, trim and max limits). It’s not taking the full movement of the servo, only when a combination of pitch and roll takes it to the servo limit.
I believe before i installed the flight controler, the mixing was done diferently. Something like, if i pull the pitch stickk all the way forward, both servos would go to the extreme. and when i give it some roll one of the servos leaves the extreme position so that there’s a diference from left to right.
While with the FC, i pull the stick (elevator) to the extreme, servos go to 75% and with the roll creates the diference, one goes to 100 and the other goes to 50.
I am not saying one is beter over the other one, but… i wonder if i can control this behaviour.

Thanks in advance,
Rui