I’m using a octocopter and I have a geo-fence set at 160m. I just loaded up the latest firmware because this is my backup drone and did a test flight in a field. I setup a mission that had two waypoints at 65m each. I took the drone off and flipped it to auto. At that point the drone kept gaining altitude. It didn’t move forward or anything, just up. This happened twice, the first time I put it in RTL when the drone was at 100m and it kept going up so I put took it out of auto mode (with RTL on) and it landed. The second time, it went to 100m so I put it in RTL but it just kept going up and FAST. It reached 452m before the geofence kicked in. In my setup I have the fence set to 160m. Even when I put RTL on the drone kept going up, I thought it was gone forever so I switched it to position hold and dropped the throttle all the way down. The drone finally started to come down (thank God). I ran the auto-analysis tool of the log in Mission Planner. The only part that failed was IMU Mismatch (Mismatch: 6.68, WARN: 0.75, FAIL: 1.5). I’m not sure why it ignored my altitude fence until it hit 450m and why it ignored RTL, and why it kept gaining altitude. Could someone PLEASE check out my logs?

Here is a screen shot of the autopilot mission in mission planner: 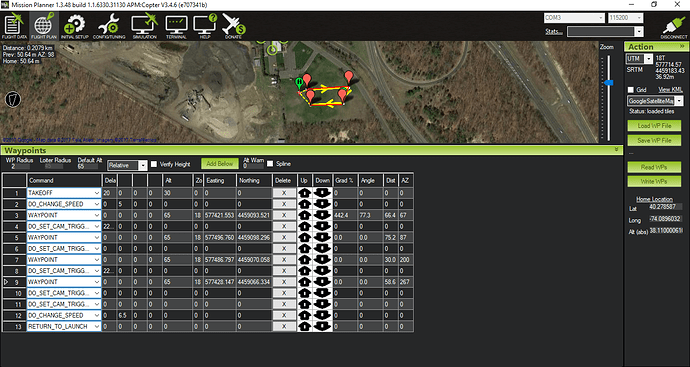 Vibrations are very high and will have caused the unwanted climb.

You’re actually lucky you managed to bring it back down in Position Hold as this is still using the autopilot to control altitude.

It’s a really good idea to practise flying in stabilise mode, as this would have been the best mode to switch to in this kind of event as it’s one of the only modes where the pilot has manual control of the throttle.

Do you see why RTL and my altitude fence didn’t kick in? The thing was literally a tiny spot in the sky at 450m up when the altitude fence kicked in. I have the fence set to 160m though. I just double checked and my first flight mode is stabilize. I know I put it though all of the flight modes when I panicked.

Both fence and RTL modes did activate, but this doesn’t make the vibrations go away!

Vibrations confuse (saturate) the accelerometers and so the copter sometimes thinks it is descending even when it is actually climbing. 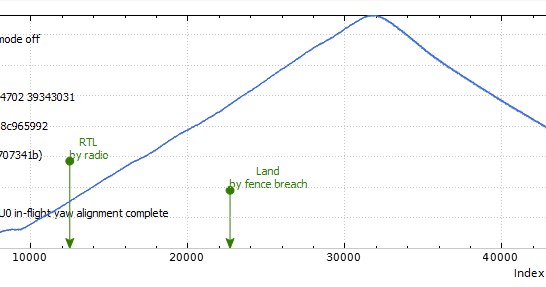 I would double check you can activate Stabilize from your transmitter and practice flying this mode if you haven’t used it before.

Most important though is that you resolve the problem with vibration.

I rigged together another backup and i’m going to try flying with this one. I really appreciate your help.

One other thing if I could. I noticed that a few of the motors were very hot. I’m using the same prop size that came with the drone originally, (3DR X8+) which is 11x4.7 SF & SFP. Did anything jump out at you that would indicate why the motors are getting so hot? Even when I did really short low altitude flights the motors were rather hot. Maybe I just never noticed but I definitely did this time.

Your motors were working really hard during the climb, with huge variations in power output… I’m not surpirsed they were hot!

In addition to fixing the vibration, check the weight distribution / center of gravity as it looks like some of your motors are working much harder than others. 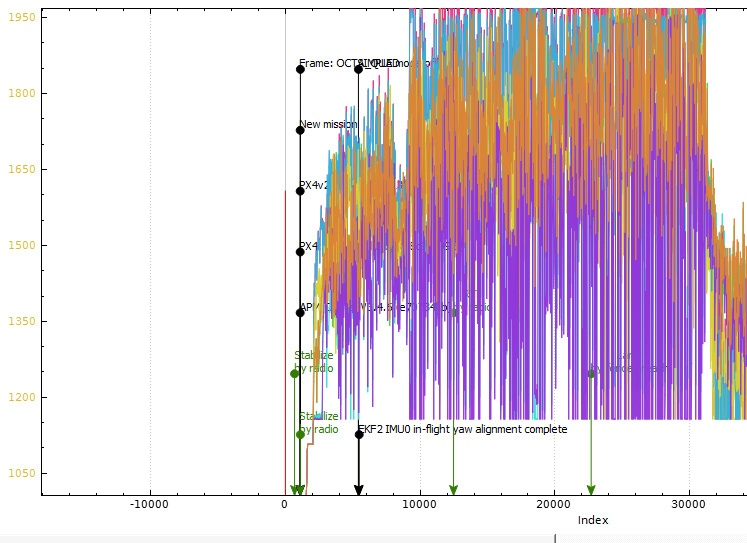 ok will do. Thank you again for your help.