I have been working on this for a while now and seemed to finally make some progress. I have attempted several transitions now with no real success. The two times I realized that the minimum airspeed was just too low so I was transitioning into a stalled condition. I also increased my control throws, minimum airspeed and cruising speed to help aid in control ability after the transition. Today I attempted this again and all seemed well briefly… this time during the transition I was able to gain some altitude and seemed to have positive control over the aircraft but then shortly after the transition was complete the fixed-wing motor shut off completely… I recovered in QHover and landed safely. One good thing to note is that switching back to QHover or QStabilize really works well when the airplane is falling out of the sky.

Please review the log and video and let me know your thoughts. Thanks!

Transition starts at 1:20 in the video

transition was complete the fixed-wing motor shut off completely… I
recovered in QHover and landed safely. One good thing to note is that
switching back to QHover or QStabilize really works well when the airplane
is falling out of the sky.

RCOU.C3 was tracking RCIN.C3; why was the pilot input dropping?

I noticed this as well… good question! The throttle stick was almost full when this happened. On another project I was using a PPM encoder and saw things like this happen due to the encoder failing… giving erratic RC commands. This OctaPlane is using a Spektrum RX direct to the Pixhawk, so I can’t imagine that is the issue here.

After looking at this further I found something interesting. It appears that the motor shut down and the resulting battery current goes to 0, before the throttle input changes. The commanded Throttle Out when the motor shut down was 82%. The graph for RC ch.3 matches the throttle output while switching back to QHover. So now I am wondering if this was a current or over heating issue with the forward flight ESC and it shut down on its own? 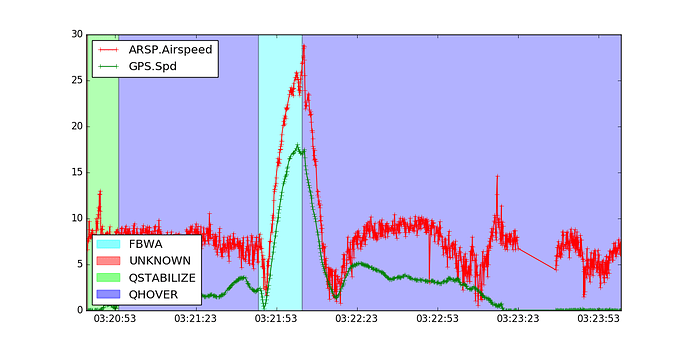 That’s an unhappy graph. Did you calibrate your air speed sensor?

It could be that TECS was seeing your vehicle as over-speed; I suggest you enable the TECS log messages to remove doubt for next time…

Or was it really actually that windy?

Yes the airspeed sensor was calibrated. This shows about a 10m/s headwind, which reflects the current conditions roughly.

It turns out that the forward flight motor ESC was overheating due to a poor positioning and airflow. After some creative air flow ducting and a heat sink addition, everything worked fine.

I was able to complete a full transition flight with no issues.

I’ve had some pretty successful transition flights the past week but am having an issue during the first stage of the transition.

While hovering in QHOVER and switching to FBWA, the FW motor powers up and and I slowly start to increase throttle. If I try to accelerate too fast, the airplane yaws dramatically and does a flat spin / flip maneuver! I’m not sure if this is aerodynamic related because this is a flying wing configuration and unable to keep a good heading at such slow speeds, or if its a Q_RAT_YAW tuning issue… like it is having trouble keeping a heading while moving forward.

If I throttle up very slowly and use yaw and roll commands to keep it straight during the first few seconds, everything is fine after that.

Keep in mind, this is a 3 meter wing span / 15kg aircraft, that’s a lot of mass to keep straight!

i also experienced that “yawing” when powering up the front motor too fast.
logs here: Done and fixedddddddd