thanks in advance! I have only flown my new build 2 times and both resulted in a crash,most of the flight was actually pretty stable, good control from inputs. But all of the sudden it would yaw very fast and I had no yaw control and it would crash. on second flight I disabled the onboard compass because it had allot of noise and the external compass was very solid. my build is as follows
video of crash on 5-30-17

Here is one from my crash on 6-5-17. the bin file that is associated to the video because it is almost 7mb wihc wouldnt allow me to upload, so I posted the bin files in dropbox links in the original post, are they not showing up? This is my first time posting on this forum so sorry If im doing something wrong.

Just some observations.
RCout indicates motor 4 is working less than motors 1 & 2 and motor 3 a lot less.
How well balanced is your quad?
How is your power to weight as the motors are working hard?
Have you checked for ESC sync issues? 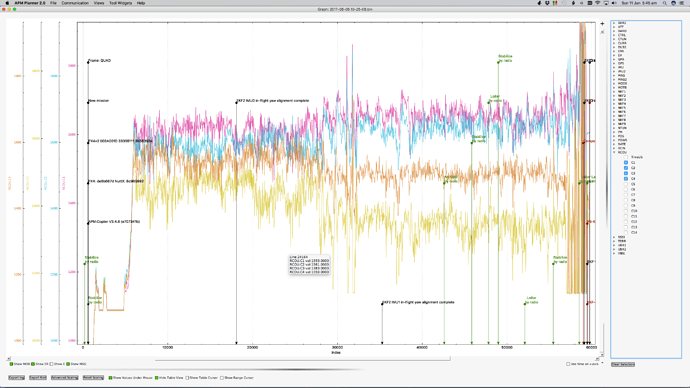 Your vibrations are borderline and could be improved. 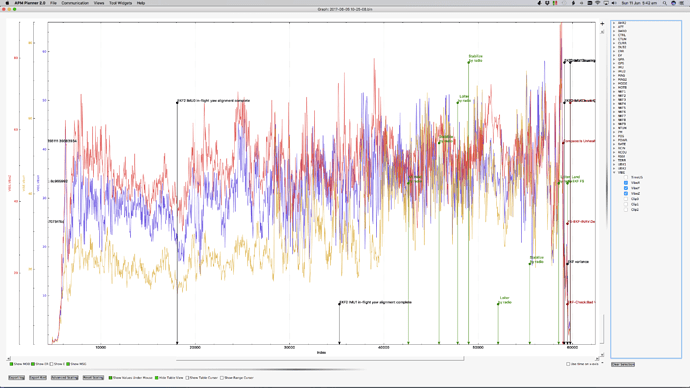 Have you done an autotune?

on the bin that you are looking at it was a little windy, my balance is pretty close but could use a little more tuning . I think the battery was too far tail heavy. I have not ran auto tune yet because I keep loosing all yaw control after about 3 minutes of flight. I am under-powered unfortunately on that flight I was running 2 5000mah 6s battery but I will have to keep it at 1 pack for now. I have looked for sync issues by inverting the props and running the copter secured to a table and I can’t hear or visually see any sync issues, Is there any way to check through logs?

I jjust looked at the logs from 5-30 and motors 1 and 2 are the ones working the lightest so I think It may have been fighting the wind more than a balance issue.

I have wondered if the rcout having a squarewave pattern is normal?, this happens everytime I completely loose all yaw control

That’s a strange output plot.
It usually is square due to hitting max and min output values, but something is definitely not right there as motors 1 & 2 basically shut down.
As they are both the CCW motors spinning is inevitable.

Have you followed the tests for motor sync issues?
I would probably rule that out first.
Can’t say for certain as I have never encountered it personally.

The only sync test I know if is to invert the props and run the throttle at different levels and both slowly and quickly. It seems to do fine like that. Is there another test you suggest?

To catch motor sync
1 - lash down the copter with props on correctly, or if it is high powered and you can’t find sufficient weight, move the props one motor in either direction (causes them to push down so the load is still the similar)
2- set the throttle to a switch (might need to set a mix on some Tx’s)

What this does is enable you to suddenly change throttle values.
A 2 position switch is OK, 3 might be better.
So your not just hitting max throttle on the switch you can set the travel down and slowly increase it as you test.

Since there is no feedback from the motors you can’t see sync issues in the logs correct? Just listen for the sync issues.

I taped my quad down and moved each prop so it is pushing down and set up a 3-way switch to control throttle. Here is the video. I don’t see any sync issues.
https://youtu.be/SmSoZ7_t7XY