Once setup on my multirotor I wanted to use Tower on a tablet to do some flying. When I got to the flying area I had to do a compass calibration due to many compass errors/inconsistencies. Tried with the app and… no it’s not there, I couldn’t do it.

So without a laptop to do compass cal I couldn’t fly.

Surely the compass calibration routine is way more important on a “mobile” app than IMU calibration which is only done once and then doesn’t need to be done again?

What version of FW are you using. There is support for on-board compass calibration, which is in AC3.4 but not previous versions.

Thanks Bill, using Tower V4.0.0, V3.4.1 Copter and V3.7.1 Plane (I think). I couldn’t find compass calibration at all, neither can I find radio calibration, both of which we needed while before flying today. We did some setup on the laptop but it’s battery went flat so then we switched to Tower.

On Copter we kept getting compass variation warnings so I wanted to do compass calibration again. Then with Plane it wouldn’t arm after trimming the rudder so normally a radio calibration fixes that. With no laptop we were kinda stumped. Would be great if those two could be added, as IMU calibration normally is done once per airframe and shouldn’t be needed again at the flying site which is where Tower is most likely to be used.

They are under the top/left menu. As for compass variation issues, set COMPASS_USE2 = 0 and reboot. That should eliminate the comparison between the internal and external compasses. 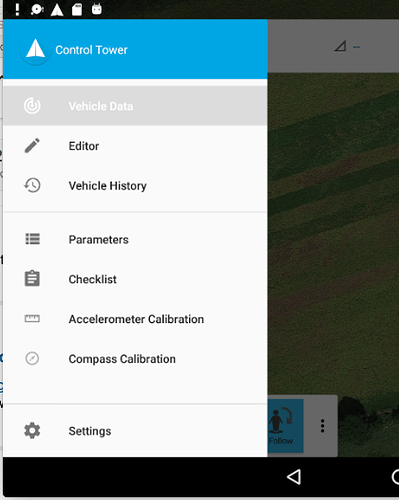 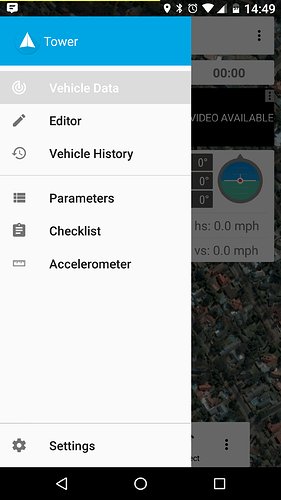 You have to connect to the FC first, then Compass Calibration shoud appear.

IMO, This is a poor UI design.
All options should be visible with the inactive options in grey. Users will at least know what options exist, even if the option is not currently available.