No braking in throttle forward or reverse

Using latest beta version on Pixhawk 2.1 with Here+ RTK, Sabertooth 2 x 25. Servo function rc1 = 73 servo function rc3=74. In manual mode, it will have crisp left and right turning that stops immediately when releasing joystick to center. In throttle forward or reverse, it seems to slowly build up to max speed but does not have any braking and will continue to roll past intended target. Any ideas on how to make the throttle response as responsive as turning? I’ve played with transmitter exponential and linear responses and no change in throttle responsiveness. Thanks!

Is the vehicle in Manual mode or is it another mode? In which case the only thing in ardupilot that could affect this is the MOT_SLEWRATE parameter (it’s mentioned at the bottom of the above linked tuning page). So you could try setting that to zero to disable the throttle slew feature. I suspect though that what you’re seeing is a feature of the motor driver itself.

If you’re not in Manual mode then it’s probably best to provide a log. It may be the ATC_ACCEL can be increased or ATC_BRAKING can be enabled to help.

Thanks for your help! And yes, everything is in manual mode. I will take a look and check the parameters tomorrow.

I think i’m seeing a similar problem in guided mode !

I have a simple square path that I’m currently trying to tune the robot on. 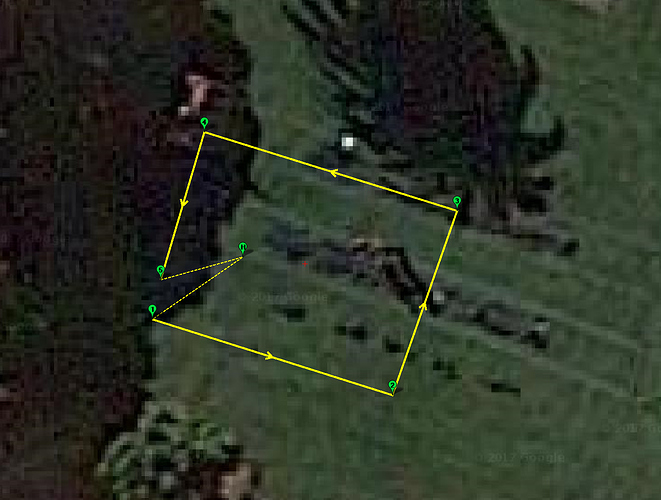 At every waypoint it overshoots by about a metre. I am currently running the robot in guided mode (I’m sending throttle and turn rates to the ardurover software via mavros).

As you can see at every turn (waypoint 2 ,3 & 4 ) (see the big green dips in the throttle graph) we command the rover to stop before issuing a turn rate …but the robot keeps moving.

An interesting log because there are a number of unusual things happening so I’m just going to list them as a starting point:

I think a couple of good tests to do would be:

Thanks for the feedback. I will do those test - hopefully on Monday/Tuesday.

The reason why I resorted to only using GPS 2 (My Emlid Reach RTK is connected to this) was because during my tests, I kept getting errors saying that the location of GPS 1 (onboard Navio 2 gps) vs GPS 2 was different by XX metres. I just decided that I can make do with just 1 really accurate GPS.

Placing the flight controller in the middle (or more accurately at the point on the vehicle that it rotates around) is best but you can try the offset method described on the “Sensor Position Offset Compensation” wiki page. It compensates somewhat but not fully I think. I haven’t seen enough people making use of the feature to know how well it works in practice. I guess we will find out when you try it!