I understand that Rover has out-of-the-box support for NMEA 0183 wind sensors. I’m curious about people’s experiences with actual units. I’m working with a 4-foot, ~25 lb displacement hull, so I can afford a little mass on top of the mast, but I would still prefer to use a smaller unit. 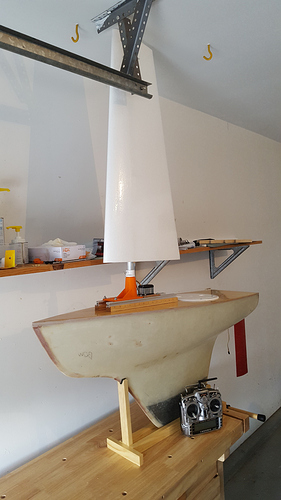 This is the one I use,

Very compact but not waterproof, as with everything its a compromise between size, weight and robustness.

Cool boat!, if the wing angle direct drive? That configuration will require a little firmware work. Currently to stop we just let the sail out all the way, with a traditional main sheet setup this lets it find its own angle, for direct drive we will have to actively angle the sail into the the wind. Also the main sheet system don’t know the difference between the left and right side. (also if the windvane turns with the sail that will confuse the code)

Thank you for the pointer, @iampete. That is pricier than I expected. I’m curious–how well do these work at higher angles of heel? I think you do foiling boats, so they mostly tend to stay upright, but keel boats, especially smaller RC ones can heel past 45 degrees. Do you still get meaningful readings then?
Also, I’m curious about the IP non-rating, “NOT allow to be submerged fully or partially in water.” My boat is unlikely to capsize, so submersion is less of a problem. I imagine it can deal with spay though?

is the wing angle direct drive? That configuration will require a little firmware work.

It is and it will.

Right now, I’m just trying to figure out how to sail this rig in manual. My first milestone is just to see a wind instrument representation on my TX, so I can steer to it. I’m using a physical vane now, and it’s very hard to see from some angles.

My idea with this rig was that direct control of the AoA would make the math simpler. (That was before I discovered that Rover now supported sailboats.) I dug up this Sandia Labs paper https://www.osti.gov/biblio/6548367-aerodynamic-characteristics-seven-symmetrical-airfoil-sections-through-degree-angle-attack-use-aerodynamic-analysis-vertical-axis-wind-turbines and recalculated the lift and drag coefficients (relative to airflow) to thrust and heel (relative to hull). For every point of sail, this shows the best angle to set the wing at. (NACA0015 @ Re=80,000)

Yes. One way to deal with that is to mount the vane on the wing and subtract the wing rotation angle from the reading (I have direct control over wing rotation angle). Another is to take advantage of the hollow mast (1" aluminum tube) and thread a second mast through it that would hold the sensor. A third is to put up a separate mast in front of the main that would just carry the sensor. I haven’t decided which one I want to do. One consideration is that I have a number of sails from 3’ to 5.5’ and the sensor needs to be portable when I change sails.

I have used that sensor on my IOM keel boat without issue.

There was some discussion about wind vanes and heel angle over on the sailboat thread.

Hello again! I’ve been looking through the documentation for APM (generated with Doxygen – is this the best way to view the docs?) and I think I might have found a small bug in AP_WindVane::update_true_wind_speed_and_direction(). It looks like the code identifies true wind angle by Identifying the sideways and forward components the wind velocity from the windvane and anemometer, Subtracting the boat’s velocity vector from the measured wind velocity vector to get the true wind velocity vector…

I cant really speak to the waterproof-ness of that windvane except to say that I have had no issues with mine.

We certainly could correct wind angle for the wing turning, might require quite accurate wing angle feedback so as not to make the wind angle very incarnate, this problem can certainly be overcome tho.

Good looking boat, and a nice river! Lots of traffic. Where is this?

In the other thread you express concern about the derivation at heel=90. The denominator goes to 0. This math reflects the reality: At 90 degree heel angle, a wind sensor cannot produce a meaningful left-right reading (and a rotating vane measures apparent wind speed instead of direction).

We certainly could correct wind angle for the wing turning, might require quite accurate wing angle feedback so as not to make the wind angle very incarnate, this problem can certainly be overcome tho.

Like I said, I want to get the rig to work in manual before I propose any changes to the code. I built the hull three years ago and then the project sat. Now that I’m working with Plane for work, I discovered that Rover supports sailing and got excited about my boat again. My setup seems uncommon. There must be a reason for it :=) Most wing sails seem to use elevators, and I understand there is already support for that configuration in Rover.

It’s been a while since I had time to work on my Ardusailboat. However, I wanted to share a bit that is relevant about wind sensing on the sailboats.

Anyway, I wish you the best, Ari. While the above considerations are interesting, I probably won’t suggest any major changes to Ardupilot because it seems to work quite well. Thank you for your work, Peter.

Thank you for your note, Tim. It is encouraging to see a new generation of engineers coming up to replace us geezers. Very nice presentation.

I’m not looking to change any code in Rover, and certainly not asking anyone else to. I’m not even sure I’m going to use Rover with this boat. At this stage, all I want is the equivalent of a wind instrument on a full-size boat, with all the error such instruments include. I imagine that if I use a NMEA 0183 vane like @iampete describes, I can feed the serial into my FrSky RX and have a Lua script that displays the raw angles on my Taranis.

I wonder if anyone has used this unit: https://www.nasamarine.com/product/nmea-masthead-unit/

Another question: what are y’all using to get electrical signals below decks? Are there reliable watertight connectors you can recommend? Right now, I have wires going though the deck and I caulk around them. It’s a simple solution that works with the two servos I have now, but as I start to run additional wires (wind sensor, antennas) down from the mast, I want a more flexible solution.

I’m not much help here I’m afraid, wires through the deck and caulk (or hot glue) is my my current solution. The main obstacle on my smaller boats is having a big enough flat spot on the hull for a proper waterproof bulkhead connector.

Another question: what are y’all using to get electrical signals below decks?

My thinking is to make as few holes on deck as possible.
I was lucky on my Laser, there is only one hole, that’s were the original antenna would stick up. The hole is more a moulded tube on the plastic deck sticking up some 1-2 cm. I was able to squeeze a thin antenna cable, a rj45 LAN cable and a 5v wire for a camera in the stern. 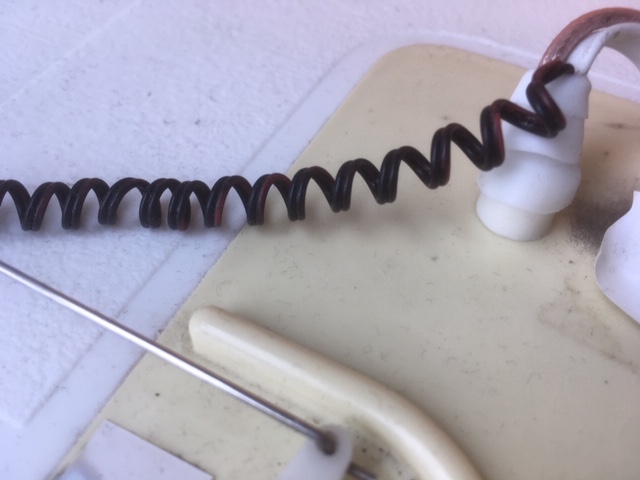 The lan cable supports a NMEA wind instrument, an external compass, a motor throttle and a servo control of a wing sail.
I stuck all cables through an earphone rubber part on the top. Never had any problem with water inside.

The pictures of wind instruments in you post, that would be very useful to have in a GCS when sailing remote.

What type do you use?

The pictures of wind instruments in you post, that would be very useful to have in a GCS when sailing remote.

I am not aware of any, no. If you’re willing to pay $500 for one of the Raymarines in the photo, I’m sure you can get NMEA out of your GCS and hook the physical display to that :=)

I’m thinking about writing a Lua script for OpenTX. Similar idea to yaapu telemetry, but of course much simpler. What radio TX do you use?

Hi Ari,
Its the same model as @iampete using. It was a very new model at the time we got excited

I think they also have a model with a compass in it.

My TX is a Walkera Devo10, flashed with Deviation open source firmware https://deviationtx.com

Its the same model as @iampete using. It was a very new model at the time we got excited

It is an exciting product. I have a physical, rotating windex on the sail now. Being able to see it (if the boat is close enough) if very helpful. I Hate to lose that.

I suppose you could build one out of a servo, really :=)

Maybe some more details on the TX thing…
The tx is just used to generate PPM signals the the RFD900x link for telemetry and PPM.
So all data comes nicely to the RFD unit and then via Bluetooth to the GCS.

Come to think of it, the NMEA link to calypso instruments have several third party software that can display the data like your picture. But I have no idea how to get the data to those softwares…

There are phone and PC apps for full-size boats that can read in NMEA data and serve as virtual displays. http://opencpn.org/ is a good place to start down that rabit hole.

Oh, thanks Ari, this is a bit over my head

But I will research it.

Being able to see it (if the boat is close enough) if very helpful. I Hate to lose that.

Yes, I know what you mean, sailing with a normal sail you have one enormous view of where the wind is coming from and doing to the boat, but with your fixed type of wing you have no idea, very similar to the Wing sail rig on my Laser. Very different animal and really need some instrument to sail it.

Hi All, just starting the journey on Sailboat. I’m looking at an endurance offshore project and have everything I need but cannot get my head around the wind sensor. This boat will be in one of the worst areas of ocean in the world and I fully expect it to be rolled and smashed by the tops of waves. As yet, I have not found a wind sensor that is waterproof and which could withstand a roll.

There a a huge number of yacht sensors that output NMEA,

The WND100 is a ultra tough marine wind sensor from Digital Yacht with an industry standard NMEA0183 Output for maximum compatibility.

A high performance system that sends NMEA wind speed and direction data 10 times a second. In demanding conditions, where high performance is essential, the Clipper Tactical wind mast sensor is the ideal choice. With ten updates every second it...

Such sensors are not cheap or practical for smaller boats but should be fine for something larger.

Also happy to take feature request for new protocols if you have a sensor and are happy to test. (NMEA 2000 is not going to happen any time soon)

Thank’s for the above.

I read in the first post about the ultrasonic sensor that it was was not waterproof. If it is waterproof, that’s perfect.

I am pretty across all things NMEA, I have built and raced ocean racing yachts for most of my life. While the sensor on top of a mast would be impervious to rain and wind driven spray, I have never seen one survive a yacht rolling over. This is more a factor that the mast didn’t survive.

If the ultrasonic one can handle immersion, I will order that one.