Never power the rfd900 from the autopilot

I’m looking to power a liquid level sensor that requires 5 volts for power. Nothing on my airframe provides 5 volts without using a voltage step down of some sort. In an effort to reduce weight on an already heavy (48ish pounds) build I’m considering using the 5 volts off the RFD900x. To power the sensor I’ve connected pins 2 and 6 on the RFD to the corresponding ground and power on the Pixhawk 2.1’s Aux 1, providing power to the Aux rail. 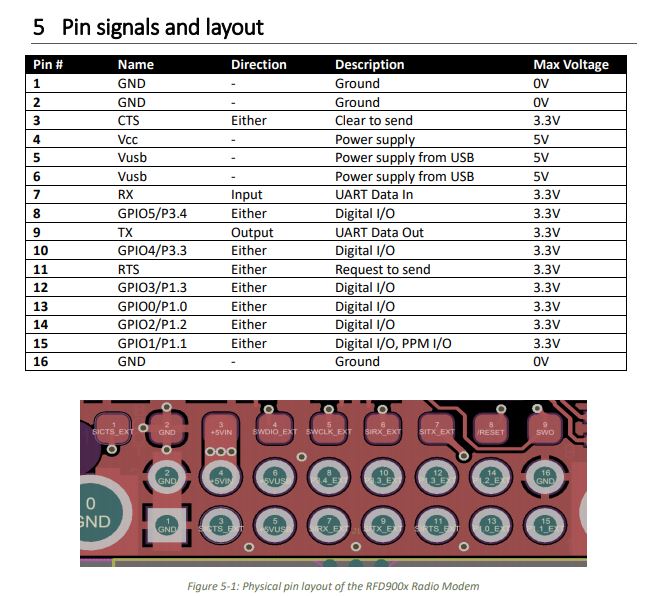 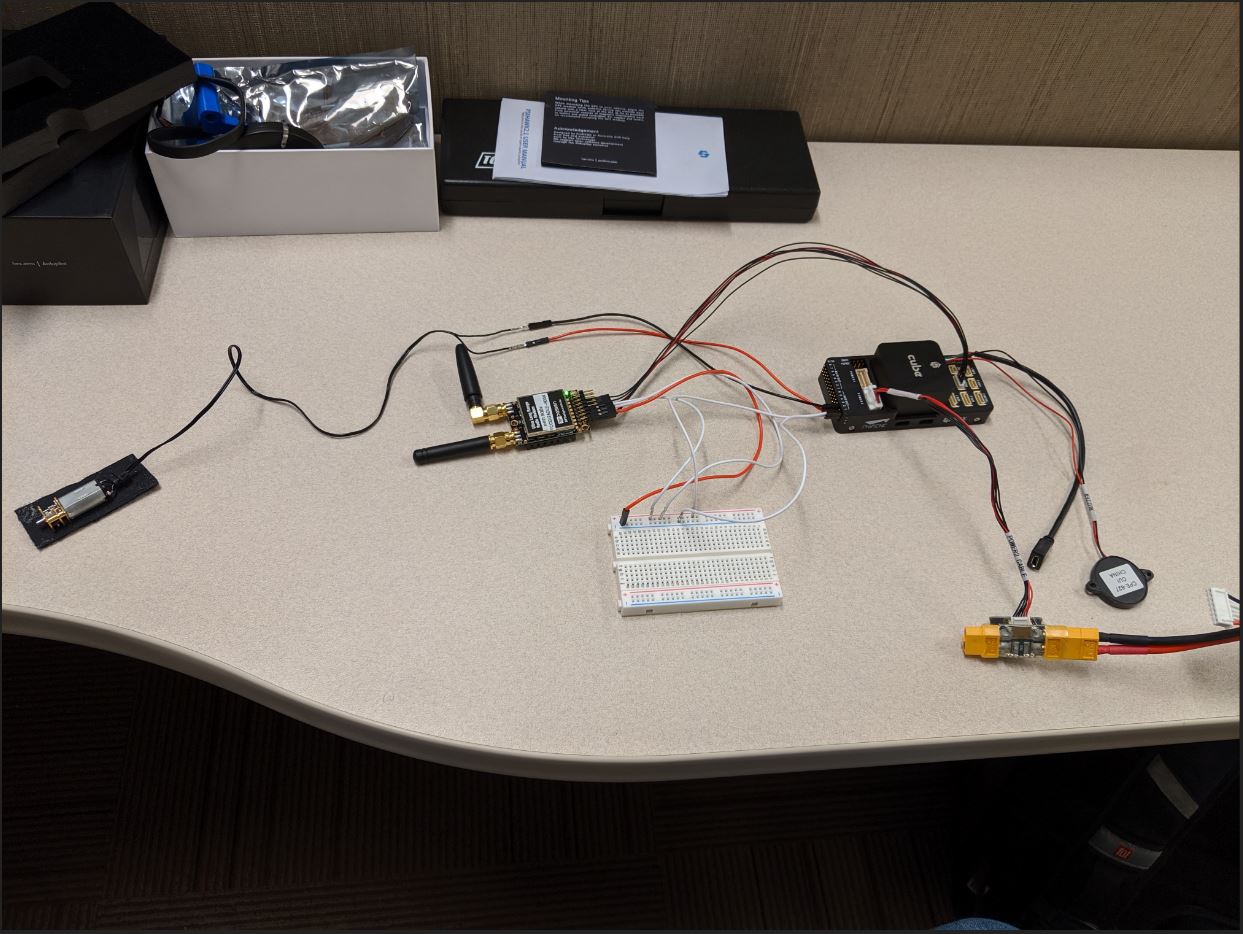 rf2.JPG1243×934 149 KB
I currently have a DC motor set up as a dummy load for testing, but I am wondering if there will be any negative affect in doing this, such as overdrawing the telemetry port on the pixhawk? Everything seems to power up and connect properly on the bench however.
JDeForest (Jake DeForest) October 22, 2019, 7:03pm #3

I’ve yet to have an issue powering the RFD900x off of telem1 but I imagine profi would know best.

But connecting to the Second power input adds the Zener diode into the line, helping to protect from power spikes.

In the above application, I would advise connecting the primary power supply as well.

And yes, my advice is definitely “Do not power an RFD900 via the telemetry ports”

This is not only my advice… but the advice of RFDESIGN, Ardupilot, PX4 hardware team, and anyone who has been involved in the core of this project

It’s not a simple matter of looking at peak current, it has caused brownouts in the past, don’t risk it

BEC it is then. Looks like I’ll be looking into getting the RFD external power too, thanks for the input.

@proficnc Is this paragraph from the “Pixhawk 2 spec manual” on the proficnc store page for the CubeBlack complete set false?

So then is the RFD900x spec document stating that the RFD900x gets maximum output at 5.5V and 800mA incorrect? We still power the RFD900x through a BEC set to 5.5V in critical roles, but it would be nice to be able to use the TELEM1 port as a power source for quick airframes that are not high risk.

@TunaLobster is your BEC redundant in power like the Pixhawk? That’s the main reason I’d like to power straight off the Pixhawk.

so can you be specific as to what the problem is with this? Many people say they do it and its fine. We poer ours seperately but have lost telemetry on multiple occasion due to BEC’s dying. Redundant power from the pixhawk seems nice compared to that.

No the RFDESIGN docs are fine.

Maybe someone like Jeff Wurzbach can give the details as to the math involved, but things are not as straightforward as simply looking at voltage and current sometimes.

Basically, this rule… connect external power to the RFD900 has been there for over 5 years! This is not new information and is covered in the Ardupilot wiki. This applies to ALL FLIGHT CONTROLLERS regardless of manufacturer

I can state from personal experience that the RFD900x draws enough (at full power) to cause problems in certain situations. When I did this with a PixHawk powered over USB, the PixHawk would often lock up.

If you can’t power from an external BEC, you can reduce the transmit power. If you drop the output power from 30 dBm to 20 dBm, the required current drops from ~1.2 Amps to ~.3 Amps. 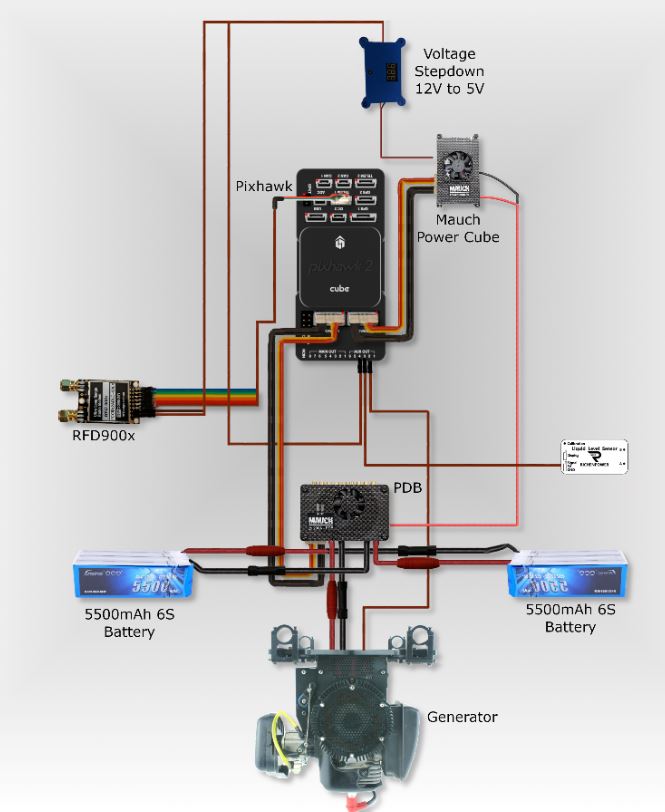 rfdr.JPG665×812 51.3 KB
I’ll be powering my RFD900x off the power cube in my setup. Unfortunately the one on the aircraft doesn’t have 5v out, although you can get a power cube with 5v which would negate the need for a BEC/step down. The power cube provides redundant power as the air frame has redundant power sources, obviously this isn’t applicable on every air frame, but it’ll solve my power issues for the time being.
jace26 (Jace McCown) October 25, 2019, 6:26pm #16

So, it may be something inherant to our system, but we’ve lost multiple Mauch Power cubes. Some of these have resulted in losing telemetry in flight. I would not consider this a redundant system, and the reason I’m participating in thread is because of this exact issue. I need redundancy outside of the powercube, like that presented in the Pixhawks power system.

So, if this is a known concern, and its something that consumers want, what stands between you and making the Pixhawk compatible with this power output? I would gladly buy a new pixhawk for all my frames if I could ensaure redundant power this way without adding some other redundant methodology to complicate things.

You could hook up two BECs potentially, doesn’t seem very practical or efficient to me but I’m unaware of any BECs with built in redundancy and we’ve ruled out the pixhawk as a safe power source. I agree that it would be very convenient to solely use the Pixhawk.

We build an autopilot, NOT a power distribution system.

We stated, and have done for actually nearly 7 years that the way to power the RFD900 is as per the recommendation of THE MANUFACTURER OF THE RFD900

By the seperate power pins of the RFD900…

Flight safety is our primary concern.

I actually will not be continuing this discussion.

Mauch has a post-cube redundancy system we have yet to integrate, but, its another piece of hardware.

I believe I understand what you’re saying. Which is the system isn’t designed for that, and you don’t want to change a stable design. The RFD900x requires certain power which the manufacturers recognize that the Pixhawk cannot safely supply.

I don’t think you’re hearing what I’m saying. Which is that some large portion of your customers would like to see this capability. We understand that the cube was designed around certain expected power outputs, and then other manufacturers made equipment requiring more power than that.
Totally understandable, it means you made something succesful and an ecosystem grew around that, congratulations. What we don’t understand is why you haven’t made your system more compatible since, as you say, “for nearly 7years” you’ve known about this desire (we could ask RFD the same question, but we understand that power out is power in, and we want a 1 watt radio). If there is a fundamental hardware problem to overcome, that’s understandable. If there is a cascading effect that would require massive weight gain to the whole product, or a huge re-design, we can understand that. But you haven’t answered that question. You just keep getting angry and defensive, instead of helping us understand, which if we can’t have a cube that can power an RFD900, is all we want.

Why not have a look at the over 60 carrier boards that other partner companies make, and see if they work better for you?

But our only priority is the absolute best in flight control.

If the market is so desperate for a carrier board that somehow magically separated all the potential problems from the flight system, why hasn’t anyone built one?

The reason I don’t want to continue this discussion, is that I was up till 3:00 helping people, this morning I was up at 5:00 trying to figure out how to get key people on the ardupilot and PX4 team to agree to not let some people destroy UAVCAN, and since then I have been on 6 forums answering questions about various topics in the community.

I have answered this topic in detail, and I’m not angry about it. If Matt C feels he needs an ego boost by bashing me, that’s fine, whatever…

I treated you with the utmost respect, and I have run out of useful things to add to the topic.