What a day… I just went over to some close field for some PID tuning (short test without video enabled).

…at that point I was a bit distracted, because two kids crashed with the bikes together. I was relaxed, because I switched to POSHOLD and asked the kids if everything is fine.

In the meanwhile the quad drifted away and crashed into some trees… I noticed it and tried to get away from the trees, but it was far away and I was not able to see the yaw orientation - and my inputs felt wrong - like the yaw changed.

I don´t understand what happend and the logs are really strange:

Please help me to understand what happend and why my quad is destroyed now. I want to understand that, before I take off again (…until then it will take a while

Had a quick look at your log.
Have a look at your RCIN values leading to the crash.
You seem to have quite a bit of RC1 and RC2 which is why it would have moved.
You then had an ‘EKF primary:Failed to init’ error, not sure about that one but it will give you a lead to investigate in the Wiki.

You have GPS glitches and vibrations very soon after takeoff. Number of Sats alone is not a good indicator of GPS fix.
I would check the 5v supply to the GPS and on the flight controller board too.
Check connections for reliability - your vibrations go up and the GPS glitch occurs. Although the glitch can come from the vibrations confusing the position, causing it not to match GPS position and throwing the Glitch error. So that one can work both ways… So always good to check logs or vibrations and track them down and fix the source of vibrations.
Set FENCE_ENABLE,1 to ensure GPS is working well before you can arm.
Set GPS_GNSS_MODE,67 so the GPS is providing a good update rate with only two constellations.

EDIT: actually looking closer, you are only ever in position hold for a short time of the flight around 00:53 - the whole rest of the flight is in Stabilize mode so no wonder it drifted away.
Did you do a short successful flight and land, then a longer fight which crashed into trees near the end of the log around 1:06

Thanks for that feedback, but I still don´t see the problem.

The crash started at 2m18s with hitting the first branches and before that I can´t see any vibration or GPS problems, 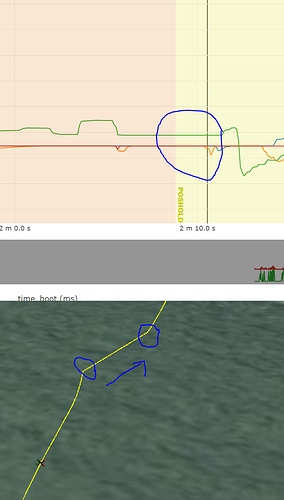 I marked the interesting part in the screenshot.
During that time the drift occurred and I guess RCIN 1493 gets treated as “no input” (dead band).

What was the reason for that?

I think that the main problem were vibrations, you had clipping events and, for me, that caused that the flight controller resetted the yaw and the change of EKF. Then it went to the trees as you can see here: