Need help in finding the cause of a crash

Could someone please take a look at the attached log file and video of the flight test and let me know what likely caused this copter to crash? It was a 3rd try and third crash – this time the copter was totaled.

Before the flight the copter was very twitchy to both sticks. It hovered at ¼ throttle, so I reduced the throttle, pitch and roll radio settings from 100 to 80. I did calibrate radio after I changed those settings.

The flight was done in AltHold mode.

Another thing that puzzles me: after it flipped in the air, why it did not try to regain stability but instead it went sideways and down? I did not steer it in that direction. Just added some throttle so the flaps would get more authority, but the copter did not even try to upright itself.

From the vid, it looks like a lack of flaps authority (very great reaction on your side to have increased the throttle). On mine it always started with the copter losing yaw control, one flap may have reached its max angle.

I can’t check the log right now, but you can look into that.

BTW, thanks for the vid it helps a lot, looking only at graphs is the opposite of fun.

Thanks a bunch. Really curious what you will get from the logs too.
No rush though - it will be a while before I build a new copter.

Exactly (sry for the late reply). You can see that here very clearly : 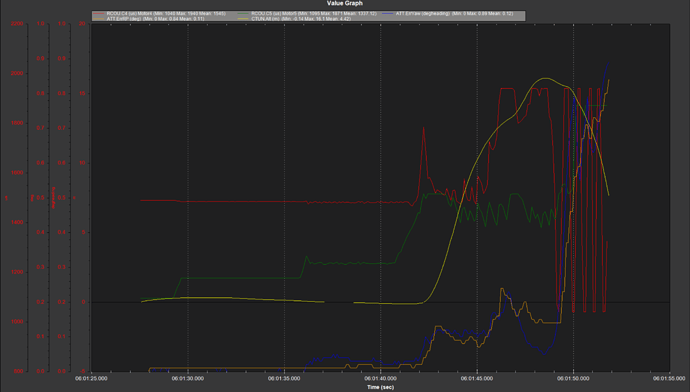 RC4 in red is saturating before everything goes south. The other servos saturate later. This very high in red value is not making the roll pitch yaw error (difference between target and actual value, in blue and orange) go away, so I think this is the cause and the saturation is not a side effect of something else (it could be a side effect, but I don’t know what else to look for after seeing that).

Also, this is RCout, not the real position of the flaps, if you have a physical limitation on the copter it could have saturated earlier. Notably, another servo is close to saturation during takeoff, but then stabilizes.

To solve this I can only give you basic single-copter guideline :

This crash I think likely happened because your CoG was not centered and put all the weight/torque on this poor flap 4, the 3 other flaps seem alright with gentle movements. I made the mistake myself of quickly modifying something (took the GPS off), not centering the CoG and crashing right away.

Thank you Hubble!
I came to a similar conclusion about the flaps, but did not realize that #4 was way worse than the other flaps. Already working on making more space below and enlarging the already large flaps.

It is really a big flaw of single copters that COG must be centered so well. I hate to add more weight as the goal of this design is to extend the flight time as much as possible.

If you find time, could you please let me know what program you use to analyze logs? I use Mission Planner. I have to see if it is possible to rescale the Y axis for each parameter separately just like you have it in your screenshot.

I also use mission planner, maybe there’s something strange with your installation if you can’t get the same graph as me (and I’m not doing anything fancy in MP to have those graph).