I’m having a problem where I’m having great descending and slow speed stability, but when going about 10m/s and releasing controls makes the drone kind of wobble.

If I tune the drone to be stable in lastly mentioned case, then the descending stability is lost. 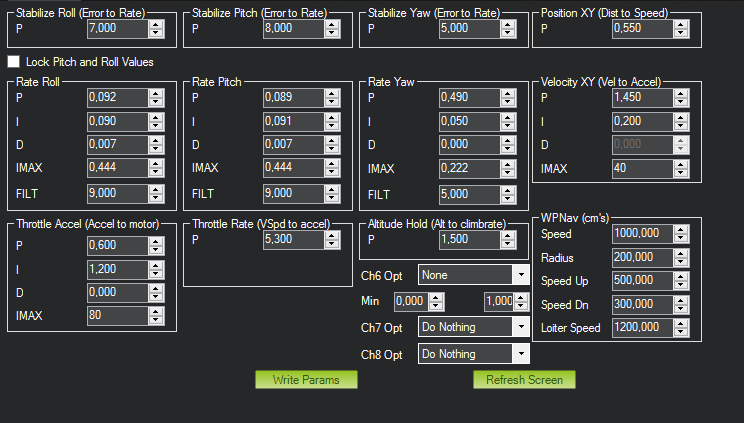 You can see that when braking/slowing down the P term is going nuts and D term is trying to keep it calm. See line 22, 24 and 28.

To be more clear:

The problem occurs when the drone is slowing down after sticks are released. The drone is in a small lean angle to opposite direction. At that moment the drone is oscillating in low frequency.

At first glance it seemed to be a issue with barometer as the drone brakes and creates an “pressure pocket” under the drone. However there was not any sudden air pressure changes that could cause this 5 Hz oscillation.

If I tried to raise D gain on roll/pitch rate controllers and the drone started to oscillate in high frequency while landing and occasionally while normally flying. So this is not an option to smooth the oscillation caused by P term.

I term doesn’t play meaningful part in this case, as it is very smooth and reacts to long term errors.

I think that there is only three things that play part at this oscillation. However I cannot find witch is the problem.

I’m open to all suggestions. I would like to hear what to look for and what other parameters affect flight performance in this situation.

What Flight Controller do you have? Out of curiosity are the Rate Roll/Pitch filters values a result of an Autotune or did you set them manually? Your Vibration levels look acceptable.

We have PixHawk 2.1 (cube). Filter values are set manually. I found 9 Hz to be best, by trial and error.

For large or powerful copters, often the throttle mixer needs to be adjusted to deal with fast flight and braking.

Your ATC_THR_MIX_MAX is 0.6. Try setting it higher, such as 0.9, and fly again with your ‘stable at low speeds’ tune. This will give more priority to the attitude controller so that it has authority to maintain the desired attitude, even when the altitude controller would otherwise saturate the control.