good afternoon, I came here to ask for help for my Navio2.
I have a raspberry pi B, and a Navio2 control board.
I already downloaded the image,
https://docs.emlid.com/navio2/common/ardupilot/configuring-raspberry-pi.
I tried to follow the setup instructions but I don’t have much experience in linux I was unsuccessful, I was asking if any colleague has an image already mounted for Raspeberry with Quadcopter that could share with me already configured, thank you

The image from Emlid is already configured, and if you follow their install it’s quite easy.

Let’s keep it in English. And from the docs here: https://docs.emlid.com/navio2/

ok, So you download the image file from Emlid, and you use a software like Etcher https://www.balena.io/etcher/ to write that file to a microSD card. This is what you were asking?

From now, you can connect the RaspberryPi to a monitor/TV and use a mouse and keyboard to configure the running software.

The Emlid image allows you to switch between different vehicles easily.

and you have a menu system to change the vehicle type, how it starts, etc… 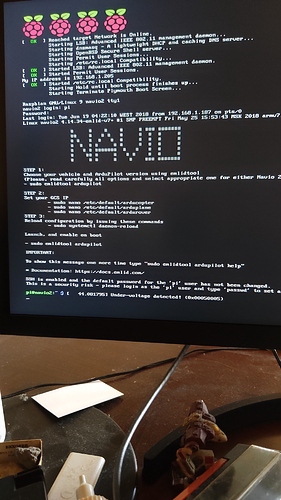 Ok, how I did it I don’t know. I realized I was working with a wrong image on raspberry.
I already uploaded a new image for the raspberry 3 B, now I have a very deferent monitor presentation I can work on the ship2 configuration, thanks for the help.